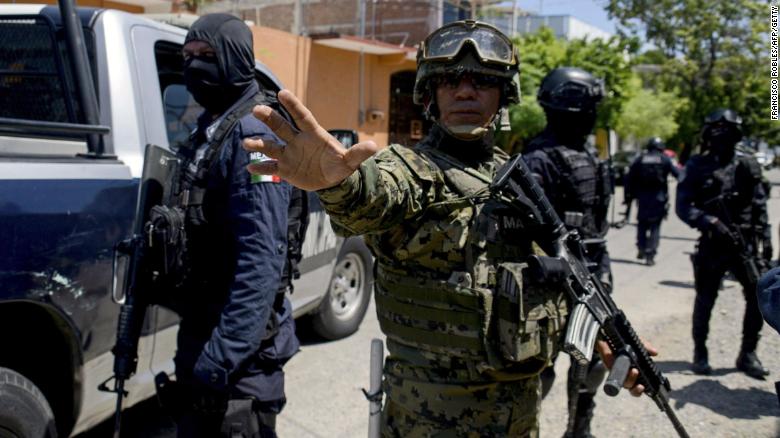 The Guerrero Coordination Group is overseeing the takeover of Acapulco's police.

(from Associated Press at NY Post) MEXICO CITY — Authorities in southern Mexico disarmed and placed under investigation the entire police force in the once-glittering resort of Acapulco on Tuesday, September 25, [saying] the local cops were infiltrated by drug gangs.

Officials in Guerrero state issued arrest warrants for two top Acapulco police commanders, accusing them of homicide. It was the latest fall from grace for Acapulco, which was a favorite haunt of movie stars in the 1960s but has since fallen victim to warring drug gangs.

The state government said it took the step “because of suspicion that the force had probably been infiltrated by criminal groups” and “the complete inaction of the municipal police in fighting the crime wave.”

The rest of the police officers [more than 700 police officers] were stripped of their guns, radios and bulletproof vests and taken for background checks. Law enforcement duties in the seaside city of 800,000 will be taken over by soldiers, marines and state police.

Following the removal of the Acapulco police force, the US government repeated its active travel alert advising US citizens not to travel in Guerrero state due to the armed groups that are active in the region.

Last year, Acapulco had a homicide rate of 103 per 100,000 inhabitants, one of the highest in Mexico and the world.

Local police in several parts of Mexico have been disbanded because they were corrupted by drug cartels. In Guerrero alone, local police have been disarmed in more than a dozen towns and cities since 2014, though none as large as Acapulco.

In the northern state of Tamaulipas, one of the hardest hit by drug violence, almost all local police forces statewide have been disbanded since 2011.

With low pay and little training, local police in Mexico are easy prey for drug cartels, which offer them money if they agree to obey gang leaders, or threaten to kill them if they don’t.

In some cities in Guerrero and Veracruz, local police were under cartel control to such an extent that they would kidnap people and turn them over to drug gang hit men for interrogation and death.

Published at NY Post by Associated Press on Sept. 28.

2. For MEXICO:
a) list the who, what, where and when of the news item
b) For what reasons did officials in Guerrero state disband the Acapulco force?
c) What specific actions did authorities take against the police?
d) Who will replace the 700 police officers removed from the Acapulco Police Department?
e) Why were so many (all) of the Acapulco police corrupt?
f) The AP reports: “Local police in several parts of Mexico have been disbanded because they were corrupted by drug cartels. In Guerrero alone, local police have been disarmed in more than a dozen towns and cities since 2014, though none as large as Acapulco.” What do you think the incoming president of Mexico should do to destroy the drug cartels and the stranglehold they have over Mexico? (Do you think he should ask the U.S. – or any other countries – for assistance? If he were to do so, how do you think the Trump administration should reply?) Explain your answer.
g) Following the removal of the Acapulco police force, the US government repeated its active travel alert advising US citizens not to travel in Guerrero state due to the armed groups that are active in the region.
Many Americans still vacation in Mexico – and in Acapulco. They reason that they just go to a resort and their location is not dangerous. What do you think? Would you vacation in Mexico despite U.S. travel alerts warning not to do so? Explain your answer.

Acapulco, a beach resort on the Pacific Ocean in the southern state of Guerrero, has been plagued with violence, with murders surging to 2,316 last year, according to a government report released in January.

The state government statement said the city will continue to operate normally as a tourist hub, hosting a petroleum convention with 15,000 participants this week and receiving nearly 30 cruise ships during the coming cruise season. During the summer, the city saw an 11% increase in visitors, according to the statement. (from a Sept. 26 CNN report)