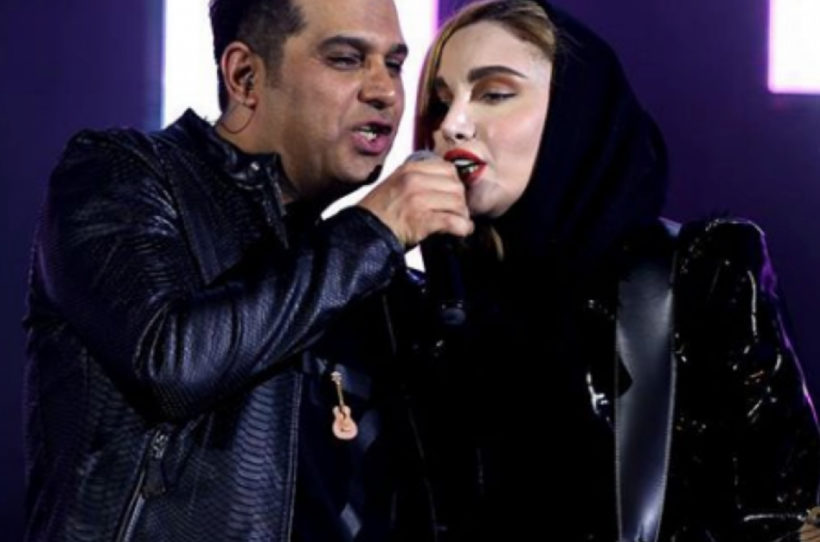 Negin Parsa was playing guitar in singer Hamid Askari's well known band on January 30 when she started singing solo. This resulted in the group being banned by Islamic religious police. (Daily Mail)

(by Ershad Alijani, France24) – Iranian singer Hamid Askari and his band performed a concert on January 30 in Milad Tower Music, a well-known venue in Tehran. However, they won’t be performing again soon.

After the concert, Askari’s music was banned by Iran’s religious authorities because he let his female guitarist, Negin Parsa, sing a solo at the end of a song. In Iran, women don’t have the right to sing alone.

This video, which was filmed by someone in the audience and posted on Instagram, shows the end of the song in question, during which Parsa sang alone for 12 seconds.

By Iranian law, which is based on Islam’s sharia law, women are only allowed to sing in front of other women. If there are men in the audience, a woman can sing with other men, either in a duet or a group, but she isn’t allowed to sing solo.

During major concerts in the country, a supervisor from the ministry of culture makes sure that this law is upheld. That was the case during Askari’s concert. Right after Parsa sang, her microphone was taken away.

The story might have stopped there but, instead, Askari decided to fight back. He invited Parsa to share his microphone and join him in singing another song.

Then, when time came for Askari to introduce his band to the audience, he said (about Parsa): “We had her voice and, now, we no longer do – we hope that it will come back!”

As a result of this incident, on February 3, Iran’s ministry of culture announced that Askari and his band were censored until further notice. They are no longer allowed to broadcast their music or give concerts.

On Instagram, Parsa said she wasn’t deterred and that she was sure that she would obtain the right to play music again as that is what is “most important” to her.

This isn’t the first time something like this has happened in Iran. On January 8, Ali Ghamsari, an extremely popular traditional musician, was also banned after a woman sang during one of his concerts. Eighteen seconds into a video of the performance, you can hear that the female singer’s microphone was cut.

Ghamsari said later that he was given warnings by the authorities, who said he’d be censored if he let the female singer perform solo. However, Ghamsari and his band decided that they “wouldn’t sell [out their] convictions.”

Published at France24 .com on February 13. Reprinted here for educational purposes only. May not be reproduced on other websites without permission from the France24.

2. For IRAN:
a) list the who, what, where and when of the news item
b) Who has banned Hamid Askari’s music in Iran?
c) For what reason has he been banned?
d) What is Sharia law?
e) What does Iranian law dictate about how/when female musicians are allowed to perform?
f) How do Iranian authorities ensure women are deprived of these rights?
g) How would you describe Hamid Askari’s actions? Explain your answer.