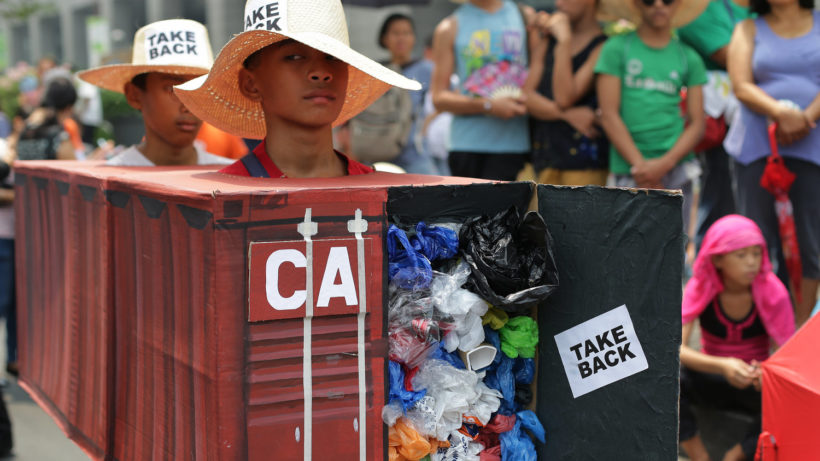 In this 2015 photo, Filipino activists wear shipping container costumes to call on Canada to remove the garbage from a port in Manila. (Photo: Aaron Favila/AP)

(Compiled from CNN, Newsweek and The Canadian Press) – Philippines President Rodrigo Duterte has threatened to “go to war” with Canada if the country doesn’t take back tons of trash a Canada-based company had shipped to Manila several years ago.

“I’ll give a warning to Canada maybe next week that they better pull that (trash) out,” he said last Tuesday, according to CNN Philippines. “For Canada’s garbage, I want a boat prepared. They better pull that thing out, or I will set sail to Canada and dump their garbage there. Let’s fight Canada. We’ll declare war against them, we can handle them anyway.” The containers were labeled as plastics for recycling, but inspectors in Philippines found the garbage was not recyclable. The trash was declared illegal as the private Canada-based company responsible for shipping the cargo didn’t have import clearances. …

In 2016, a Philippine court ordered the company, Chronic Inc., to return the garbage to Canada. But it has stayed in port storage areas, except for 26 containers that were dumped into landfill.

Caroline Thériault, a spokesperson for Canada’s minister of the environment, said last week that Ottawa was “working closely with the Philippines to resolve this issue in an environmentally responsible way,” The New York Times reported.

Ottawa had previously said it could not chart a private ship to return the shipment to Canada. The Canadian Embassy in Manila said the country was “committed to collaborating with the government of the Philippines to resolve this issue,” ABS-CBN News reported.

“I cannot understand why they are making us a dump site” said Duterte, who warned that he would sail to Canada and dump the trash there himself, adding: “The garbage is coming home. The others, around five trucks, dump it in front of the Canadian embassy.”

The Philippines has been calling on Canada for years to repatriate its trash. In 2015 Canadian Prime Minister Justin Trudeau said that he would look into it. In 2017 Trudeau said he was “very much engaged in finding a solution” to the dumped waste. Canada has tried to get the Philippines to agree to throw the trash out there – to no avail. Environment groups in both countries say Canada is violating the Basel Convention, an international treaty which prevents developed nations from dumping their waste on the developing world without permission.

The Philippines’ deadline for action coincides with the regular meeting of the signatories of the Basel Convention which started April 29 in Switzerland. Some of the groups which have been critical of Canada’s actions asked the Basel secretariat in 2017 to pressure Canada to act. The secretariat did nothing but the groups plan to push it again this year.

Earlier this month a British Columbia law firm issued a legal opinion for rightoncanada .ca and West Coast Environmental Law, stating the number of ways Canada is violating the convention. That included inaccurately describing the contents of the containers, failing to take them back within 30 days of being notified of the contents and attempting to get the Philippines to take responsibility for the contents.

President Duterte’s Defense Secretary Delfin Lorenzana has since walked back the war threat, downplaying it as a “figure of speech” meant just to underscore how unhappy the president is that the garbage has been sitting in the Philippines for almost six years.

Compiled from CNN .com by Julia Hollingsworth on April 24, Brenda Cole at Newsweek on April 29 and Mia Rabson, The Canadian Press on April 26. Reprinted here for educational purposes only. May not be reproduced on other websites without permission.

2. For PHILIPPINES:
a) list the who, what, where and when of the news item
b) When and how much garbage was shipped to the Philippines by a Canadian company?
c) What is the problem with the garbage?
d) Prime Minister Trudeau has said for several years (since elected in 2015) that he would take care of it, but never did. Why do you think this is so? – Was this the right way to handle the situation? Explain your answers.
e) A working group was established in the fall of 2018 to negotiate an end to the impasse. Finally, after President Duterte’s recent threats, Canadian officials said that Canada is going to bring the trash back but that there were still some complex legal issues to overcome. The main issue is who pays, with Canada believing it can’t go after the Canadian company involved until the materials are back on Canadian soil.
What do you think:
-Should the Canadian government pay to ship the unrecyclable garbage back to Canada whether the private Canadian company pays them or not?
-Could President Trudeau have handled this in a different manner? If so, how? If not, why not?