Without Antonin Scalia, what’s next for the Supreme Court? 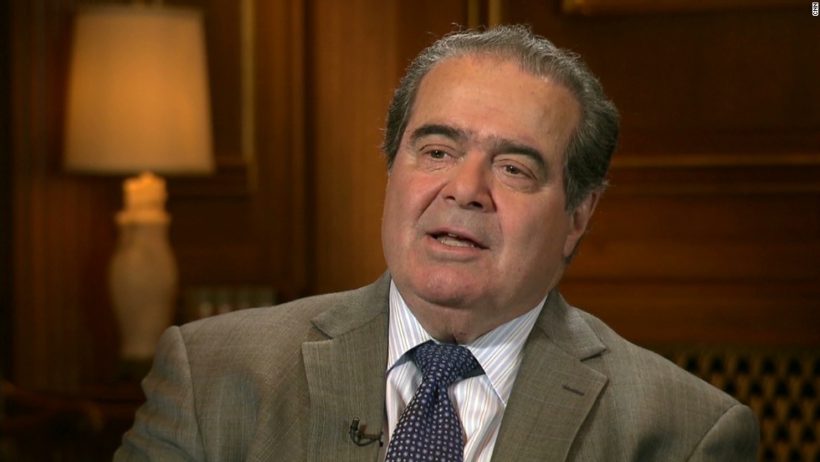 Supreme Court Justice Antonin Scalia was appointed by President Roanld Reagan in 1986 to fill the seat vacated by Justice William Rehnquist when he was elevated to chief justice. At the time of his death, Scalia was the court’s longest-serving justice.

(by Rebecca Kaplan, CBS News) – Justice Antonin Scalia’s unexpected death Saturday comes at a time when the Supreme Court is more consequential than ever. In this term, the court is hearing cases on the Obama administration’s executive actions on immigration, contraception coverage, union contributions, abortion restrictions, affirmative action and more.

The high court is now left with eight justices, instead of nine (see “Background” below), and it could be several months, if not longer, before the vacancy left by Scalia is filled. While the confirmation process typically takes two to three months, the Republican Senate majority leader has vowed that the Senate will refuse to consider any nominee before a new president is elected. With 11 months left in President Obama’s second term, the court could be without a ninth justice until well into 2017.

According to Supreme Court rules, decisions are not final until the moment they are handed down. If Scalia did cast a vote, but the decision has not been announced, his vote would be voided in those cases. And if the eight justices deadlock 4-4, the ruling of the lower court will stand.

“Even if President Obama nominates and even if the Senate were to go along with someone and confirm, the soonest would not be in time to decide these cases from this term,” said Ilya Shapiro, a senior fellow in constitutional studies at the Cato Institute. “At best they would be pushed for re-argument in the fall which, again, is even closer to the presidential election.”

On other cases where there was a wider division among the justices, the decisions will proceed.

“It really just depends on what the court internally wants to do with a lot of these different cases,” Shapiro said. “Only about 15 to 25 percent of the cases end up 5-4 so it’s not that the entire work of the Supreme Court comes to a grinding halt.”

If the Republican leadership in the Senate remains committed to carrying over the vacancy to the next president, there will not be a nominee until at least November. And even then, especially if the Republicans maintain control of the Senate, it will have to be a nominee who could garner support in both parties.

Ordinarily, “because the opening was unexpected, the nomination would not be forthcoming for a couple of months, and then the confirmation process would take several more months,” wrote Tom Goldstein, the publisher of SCOTUSblog. “Theoretically, that process could conclude before the November election. But realistically, it cannot absent essentially a consensus nominee — and probably not even then, given the stakes. A Democratic president would replace a leading conservative vote on a closely divided Court. The Republican Senate will not permit such a consequential nomination — which would radically shift the balance of ideological power on the Court — to go forward.” Shapiro said the president has two options: He could try to “hit a home run” by nominating a staunch ideological [liberal] ally who would have always been a nonstarter with a Republican Congress. Or, he could pick someone who is perceived as moderate and widely accepted – like D.C. Circuit Court Judge Sri Srinivasan who was confirmed by a vote of 97-0 in May 2013.

“The point to make there would be to put pressure on the Republicans and call them obstructionist,” Shapiro said. “The Republicans would say, ‘look we have no problem with this judge in particular…after the presidential election we will process his nomination in due order but this is an institutional prerogative we’re going to be protecting.'”

“If he wanted to play hardball, he could make an appointment at that time. I think it would be a mistake,” George Washington University Law Professor Jonathan Turley told CBS News. “I think history would judge him poorly to put in a recess appointment in the twilight of his term.”

Turley noted that 12 people have been put on the court with recess appointments, and eleven were later confirmed by the Senate.

One benefit to the debate, Shapiro said, is the fact that it will likely spark renewed discussion about judicial appointments in the 2016 election. And he says that’s a good thing.

“Legal pundits (experts) always talk about how judges should be a more important issue in election campaigns, and now…it’s going to be,” Shapiro said.

1. How will Justice Scalia’s absence be felt in the Supreme Court this term?

2. Who will determine what happens with the cases that have already been heard in this term?

3. What options does President Obama have, according to Mr. Ilya Shapiro from the Cato Institute?

4. Why does law Professor Jonathan Turley say it would be a mistake for President Obama to make a recess appointment to the Supreme Court?

5. What does Cato’s Ilya Shapiro say is a benefit to this debate about a replacement for Justice Scalia?

Do you support the nomination of activist or constitutionalist judges? Explain your answer.

The number of Justices on the Supreme Court:

There haven’t always been nine justices on the court. The U.S. Constitution established the Supreme Court but left it to Congress to decide how many justices should make up the court. The Judiciary Act of 1789 set the number at six: a chief justice and five associate justices. (read more at wikipedia)

PROCEDURE FOR NOMINATING AND CONFIRMING FEDERAL AND SUPREME COURT JUDGES:

(by the NYPost editorial board, Feb. 14, 2016) – – Justice Antonin Scalia’s sudden death at 79 robs the high court of one of its most important and influential jurists ever.

President Obama’s announced intent to choose Scalia’s successor promises a bitter battle — and a futile one: No Supreme Court nominee has been named and confirmed in a presidential election year since 1940.

Nor should partisan rancor overshadow the record Scalia built in three decades on the high court, whose fundamental outlook he helped redefine through his brilliant mind, pointed wit and zest for intellectual combat.

A Jersey native who grew up in Elmhurst, Queens, Scalia was already the leader of the fight against judicial activism when he became the first Italian-American justice.

Indeed, as Elena Kagan said long before she joined the high court, Scalia “really transformed the terms of legal debate in this country. He is the justice who has had the most important impact over the years on how we think and talk about law.”

Scalia was the most eloquent and passionate advocate of “original understanding” — the notion that judges should decide a law’s constitutionality by its actual words, not the “intent” behind it or the needs of society:

“It is not supposed to be our judgment as to what is the socially desirable answer to all of these questions,” he said. “That’s supposed to be the judgment of Congress.”

Indeed, he wrote in one of his many memorable opinions:

“A system of government that makes the People subordinate to a committee of nine unelected lawyers does not deserve to be called a democracy.”

He believed not in a “living” Constitution, subject to “the passions of the moment that may cause individual liberties to be disregarded,” but an “enduring” one, dedicated to federalism and the separation of powers.

Which is why, though a strong social conservative, he argued that Constitution neither guarantees the right to an abortion nor precludes the states from allowing it.

This divide over the purpose of judicial power is the main reason confirmation fights have become circuses. Scalia was confirmed unanimously — which would never happen today.

In his remarkable 30-year tenure, Scalia became the left’s favorite judicial bogeyman. Yet his closest personal relationships on the court were with his two most liberal colleagues, Justices Kagan and Ruth Bader Ginsburg — who once said, “I love him. But sometimes I just want to strangle him.”

Best known for his thunderous dissents, he also penned (at least) his share of than landmark majority opinions. Everything he wrote was eminently quotable.

As Terry Eastland noted in The Weekly Standard a decade ago, Scalia wrote for the long term, aiming to influence the next generation of lawyers. That he most certainly did — and this nation and its rule of law are much the better for it.