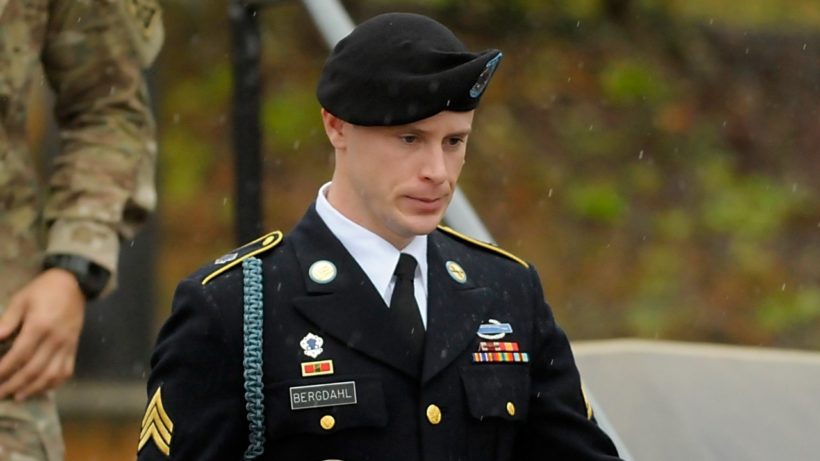 (by Rebecca Kheel, The Hill) – U.S. Army Sgt. Bowe Bergdahl will not serve any prison time for deserting his post in Afghanistan in 2009, a military judge ruled Friday.

The judge, Col. Jeffrey Nance, sentenced Bergdahl to a reduction in rank to private, a payment of $1,000 per month for 10 months and a dishonorable discharge, according to multiple reports.

Nance made no other comments, according to The Associated Press. [Bergdahl had chosen to be tried by a military judge instead of a jury, believing he had a better chance for a lighter sentence.]

Bergdahl, 31, pleaded guilty last month to charges of desertion and misbehavior before the enemy. He faced a maximum sentence of life in prison. …

Prosecutors had recommended a sentence of 14 years in prison. Defense attorneys, meanwhile, asked for no prison time, citing Bergdahl’s time in Taliban captivity (and instead asked the judge to give him a dishonorable discharge.) Following the sentencing, however, Bergdahl’s lead defense attorney Eugene Fidell told reporters outside the courtroom that he’ll appeal the dishonorable discharge.

“Dishonorable discharge is a lifetime stigma, and it deprives him of substantial benefits, which he badly needs,” Fidell said. “Beyond that, if you feel something fundamentally unfair has happened –– and I am talking about President Trump’s [comments] here…then you appeal.”

Bergdahl abandoned his post in Afghanistan in 2009 and was caught and held captive by the Taliban until 2014 when President Obama made a controversial prisoner swap [exchanging Bergdahl for five Guantanamo Bay terrorist detainees. Bergdahl claimed he deserted his post because he wanted to travel to a larger base to report “a critical problem in my chain of command,” though he never specified what the problem was.]

Bergdahl’s defense lawyers twice tried to have the case dismissed over comments from the campaign trail, when Trump repeatedly called Bergdahl a traitor who should be executed.

“We’re tired of Sgt. Bergdahl, who’s a traitor, a no-good traitor, who should have been executed,” Trump said at an October 2015 rally… “Thirty years ago, he would have been shot,” he added.

In an emotional sentencing hearing over the past week, prosecutors called soldiers who were seriously injured in the search for Bergdahl. Among those who testified was the wife of a soldier who was shot in the head and suffered a traumatic brain injury that left him unable to speak.

Bergdahl also…took the stand and offered a tearful apology for his decision to walk off his post…. “My words can’t take away what people have been through,” Bergdahl said last week. “I am admitting I made a horrible mistake.”

1. a) What charges were brought against Bowe Bergdahl?
b) How did he plead?

3. What sentence did Bergdahl’s lawyers ask the judge for?

4. What sentence did Bergdahl receive from the judge, Col. Jeffrey Nance?

6. a) Following Bergdahl’s sentencing, President Trump tweeted, “The decision on Sergeant Bergdahl is a complete and total disgrace to our Country and to our Military.” Opponents say the President has no right to voice this opinion. As president of the United States, Mr. Trump is the Commander in Chief of the U.S. Armed Forces. What do you think of his tweet? Appropriate or not? Explain your answer.
b) Reacting to the sentence and the Judge’s earlier comment during a hearing at Fort Bragg in which the judge said: “I will consider the president’s comments as mitigating evidence as I arrive at an appropriate sentence,” conservative commentator and “never-Trumper” John Podhoretz tweeted:
“So the judge went easy on Bergdahl to go after Trump. He all but said so earlier in the week. That’s wrong.”
What do you think?
c) Ask a parent to answer a) and b). Discuss your answers.

Definition of desertion (from wikipedia):

In military terminology, desertion is the abandonment of a duty or post without permission (a pass, liberty or leave) and is done with the intention of not returning. (In contrast, unauthorized absence (UA) or absence without leave (AWOL) refers to a temporary absence.)

A U.S. service member who is AWOL/UA may be punished with non-judicial punishment (NJP) or by court martial under Article 86 of the UCMJ for repeat or more severe offenses. Many AWOL/UA service members are also given a discharge in lieu of court-martial.

The 2012 edition of the United States Manual for Courts-Martial states that:

Any member of the armed forces who before or in the presence of the enemy—
(1) runs away;
(2) shamefully abandons, surrenders, or delivers up any command, unit, place, or military property which it is his duty to defend;
(3) through disobedience, neglect, or intentional misconduct endangers the safety of any such command, unit, place, or military property;
(4) casts away his arms or ammunition;
(5) is guilty of cowardly conduct;
(6) quits his place of duty to plunder or pillage;
(7) causes false alarms in any command, unit, or place under control of the armed forces;
(8) willfully fails to do his utmost to encounter, engage, capture, or destroy any enemy troops, combatants, vessels, aircraft, or any other thing, which it is his duty so to encounter, engage, capture, or destroy; or
(9) does not afford all practicable relief and assistance to any troops, combatants, vessels, or aircraft of the armed forces belonging to the United States or their allies when engaged in battle;

Misbehavior before the enemy shall be punished by death or such other punishment as a court-martial may direct.