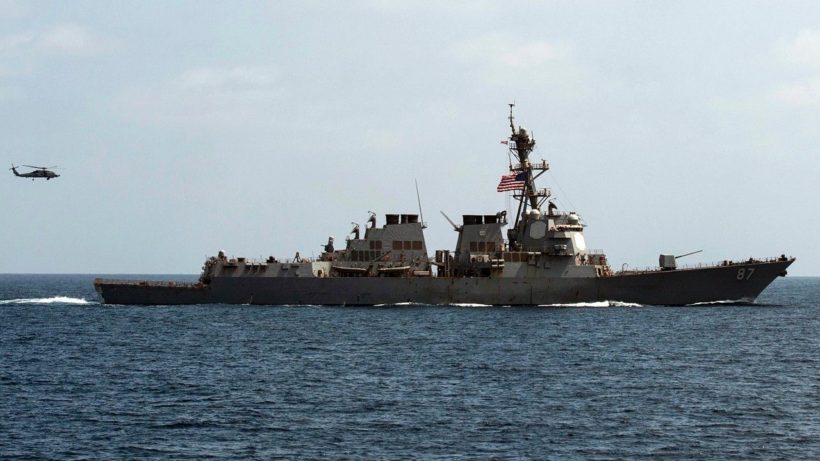 Sept. 10, 2016: The USS Mason conducts maneuvers as part of a exercise in the Gulf of Oman (Blake Midnight/U.S. Navy)

(by Idrees Ali and Matt Spetalnick, Reuters) WASHINGTON — A U.S. Navy destroyer was targeted on Saturday in a failed missile attack from territory in Yemen controlled by Iran-aligned Houthi rebels, the third such incident in the past week, U.S. officials said.

Multiple surface-to-surface missiles were fired at the USS Mason sailing in international waters in the Red Sea but the warship used on-board countermeasures to defend itself and was not hit, one defense official said, citing initial information.

The latest attack could provoke further retaliation by the U.S. military, which launched cruise missiles on Thursday against three coastal radar sites in Houthi-controlled areas in Yemen in response to the two previous failed missile firings against the Mason.

“The Mason once again appears to have come under attack in the Red Sea, again from coastal defense cruise missiles fired from the coast of Yemen,” Admiral John Richardson, U.S. chief of naval operations, said during the christening [of the USS Zumwalt] in Baltimore on Saturday.

Another U.S. defense official, speaking on condition of anonymity, told Reuters: “We are assessing the situation. All of our ships and crews are safe and unharmed.”

Houthis earlier this week denied responsibility for the missile attacks on the USS Mason and warned that it too would defend itself.

The Pentagon on Thursday stressed the limited nature of the strikes, aimed at radar that it suspected enabled the launch of at least three missiles against the Mason on Sunday (Oct. 9) and Wednesday (Oct. 12). Pentagon spokesman Peter Cook said at the time that the U.S. counter-strikes were not connected to the broader civil war in Yemen, which has unleashed famine and killed more than 10,000 people since March 2015 in the Arab world’s poorest country.

The United States, a longtime ally of Saudi Arabia, has provided aerial refueling of warplanes from a Saudi-led coalition striking Yemen and it supplies U.S. weapons to the kingdom.

Iran, which supports the Houthi group, said last week it had deployed two warships to the Gulf of Aden, to protect ship lanes from piracy.

2. How did the USS Mason defend itself from Saturday’s attack?

5. What is significant about the U.S. counter-strikes in Yemen?

6. What did the Obama administration stress about the counter-strikes?

7. Following a nuclear deal President Obama brokered between Iran and the U.S., the NY Post wrote in September:

President Obama has said that he expects his nuclear deal to move Iran toward behaving like a “member of the community of nations.” But his own State Department has conceded the reverse may be true.

In early September, Iran had threatened to shoot down two US Navy surveillance planes in international airspace. This was just the latest in a growing list of provocations, including taking 10 US sailors hostage and abusing them in violation of international law.

When asked if they would rule out the chance that the nuke agreement “has served as a cause for this more aggressive posture,” State Department spokesman Mark Toner said, “I can’t rule that out.” While acknowledging Obama’s hope for change in Iran’s behavior, he admitted, “We’ve not seen that shift to a constructive engagement.”

Of course, after citing incidents that “needlessly escalate tensions” Toner then said it all makes the deal even “more important, because the last thing anyone would want to see in the region is a nuclear-armed Iran.”

Iran has been emboldened by a deal [with the U.S.] that gives it billions in cash now and an easy road to going nuclear in a few years.

a) What do you think the next president should do regarding Iran’s aggression toward the U.S.: try to appease the Mullahs or take a diplomatic hard-line? Explain your answer.
b) Ask a parent the same question.

CHALLENGE QUESTION: List at least two h0stile actions the Iranian government has taken against the U.S. since President Obama signed the nuclear agreement with them last year.  [The agreement was opposed by more than 50% of the American people.  As a result of the nuclear agreement, the U.S. and others dropped all economic sanctions against Iran.  The U.S. also sent $400 million in foreign currency on an unmarked plane from Washington in exchange for the release of some of the hostages held by Iran.]