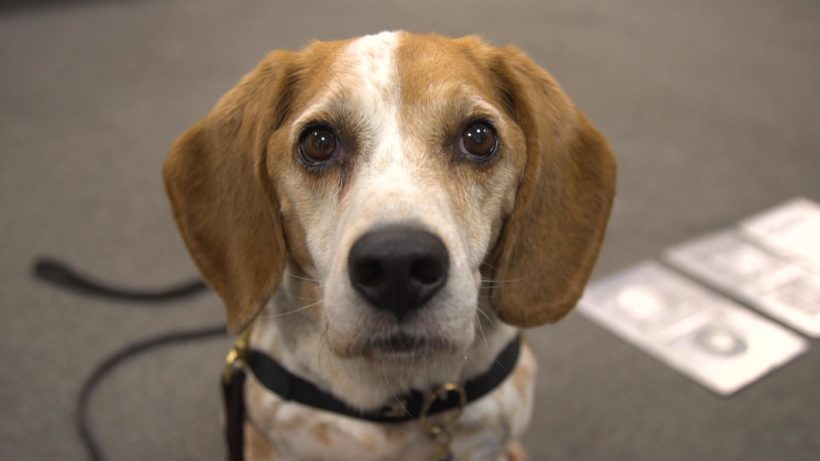 The dogs are part of the agency’s “Beagle Brigade,” which has patrolled ports of entry since the 1980s to protect the nation’s agricultural sector from foreign animal diseases.

The agency said it chose beagles because they have a keen sense of smell and a high food drive — they want to eat even when not hungry. …

With the African swine fever threat looming, the CBP, working with the U.S. Department of Agriculture, decided it was time to expand this program.

The virus — deadly to pigs, but not transmittable to humans — has no vaccine or treatment. It is spreading quickly through China and other Asian countries, crippling their pork industries. Experts say the disease could have a similar impact on the American pork industry should it infect the U.S. herd.

It will take a couple of years for the agency to fully train and deploy the new dogs, Wagstrom said. But the existing beagles already are finding hidden pork.

In October, a beagle discovered a roasted pig head from Ecuador in a traveler’s luggage. Ecuador does not have an African swine fever outbreak, but the area is positive for classical swine fever, according to the Swine Health Information Center.

And in March, the team stopped an attempt to smuggle 1 million pounds of pork from China into the United States. That investigation, government officials said, is ongoing.  [Bringing agricultural products across the U.S. border without properly identifying them is illegal.]

“People will go to great lengths to bring in something they want,” Kevin Harriger, executive director for CBP agriculture programs and trade liaison, told Farm Journal’s Pork magazine. “Most people don’t make the nexus between epidemiology and the spread of a foreign animal disease. They think if they want ham, they’ll bring ham into the U.S. with them. It’s that simple to them.”

Groups like the National Pork Producers Council also are educating farmers on better biosecurity measures, and trying to keep international travelers away from pig farms until their clothing or equipment can be properly sanitized.

“Hopefully the barriers we have are high enough and strong enough to prevent African swine fever from entering the country,” Wagstrom said. “But we have to prepare for if they’re not.”

Industry groups and USDA are working on contingencies if the disease does break through and infect North American pigs, she said.

Over the last few months, the USDA has increased the number of labs able to test for African swine fever in the United States in hopes that early detection will enable the agency to quickly contain an outbreak.

“If it’s a small outbreak, containment will be fairly easy,” Wagstrom said. “The animals will be humanely euthanized and the farm will be cleaned, and then there will be heavy surveillance of the other pigs in the area. But if it’s a larger outbreak, that gets more complicated.”

In April, the USDA and several pork industry groups completed a practice exercise on how to respond to outbreaks of various sizes. The groups plan to hold a larger practice exercise this fall that will include officials from Mexico and Canada.

Published at UPI .com on April 30. Reprinted here for educational purposes only. May not be reproduced on other websites without permission from United Press International.

2. a) What is the Beagle Brigade?
b) For what reason did the CBP and U.S. Department of Agriculture expand the program?

3. What is the problem with the African swine flu? (What is it? What harm can it do in the U.S.?)

4. What two pork smuggling cases (thwarted by the Beagle Brigade) were described by the reporter in this article?

5. How does CBP’s Kevin Harriger explain the reason that most people attempt to bring pork into the U.S.?

6. What other steps have been taken, or are needed, to protect U.S. herds from the African swine flu?

7. Travelers are informed by Customs of items they cannot bring into the U.S. What consequences/punishment do you think they should face, if caught? Especially if jeopardizing U.S. food supply?

Bringing agricultural products across the U.S. border without properly identifying them is illegal. It is one of the greatest threats to the United States’ efforts to stop the spread of foreign animal diseases (FADs) from entering the U.S.  Working dogs provide an additional tool in detection of these prohibited agricultural items.

“The beagles are an extremely valuable asset,” Harriger says. “They are beloved because they want to serve. It’s truly a partnership between the dog and the handler.”

The dogs are trained in Georgia, where they receive specific training for target odors in CBP’s different working environments, including pork, beef, apple, mango, and citrus.

The initial team training takes 10 weeks for beagle teams working in passenger environments and 13 weeks for teams in the border and cargo environments. Training continues throughout the team’s career reinforcing their skills and adding target odors of interest unique to their home ports. Some handlers say their K9s can detect up to 150 odors.

“We have training every two weeks to keep dogs interested,” he says. “We work hard to make sure it doesn’t get monotonous and build new odor training into the program.”

In addition, the dogs are trained that there are some odors they should not “hit” on – these are called non-targets. Processed foods, candy, perfumes and toiletries may cause the K9s to alert, but once the handler identifies the item is not of agricultural interest, the K9 is not rewarded and will not respond on that item again. The periodic K9 training exercises reinforce the correct target and non-target responses learned at NDDTC. (from agweb .com, Nov. 2, 2018)

Watch a 2018 video on the Beagle Brigade: