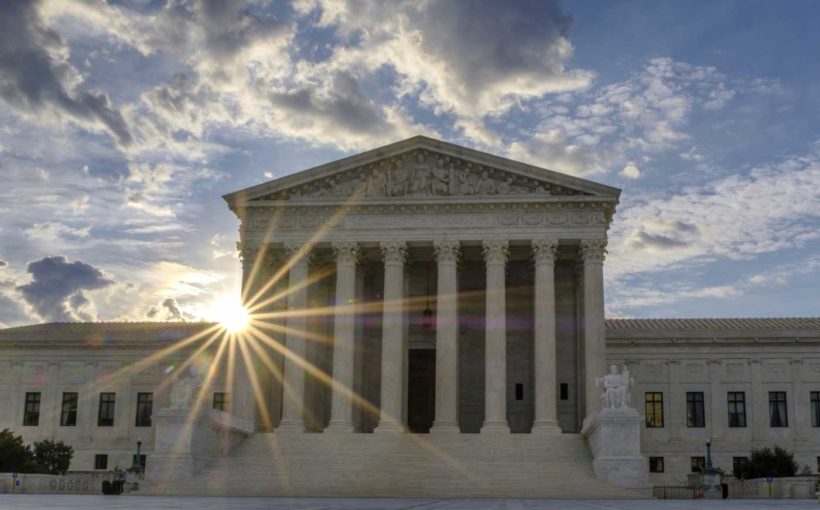 (by Melissa Quinn, CBS News) Washington — When the Supreme Court kicked off its new term on Monday, it did so against the backdrop of a high-stakes confirmation battle as the Senate considers the nomination of Judge Amy Coney Barrett to succeed the late Justice Ruth Bader Ginsburg on the high court… [Senate Republicans have the votes to confirm Barrett, but Democrats do not want President Trump’s nominee to be confirmed].

Already on the docket for the Supreme Court this term are…disputes involving the Affordable Care Act and special counsel Robert Mueller’s questionable investigation into Russian meddling in the 2016 election.

…The high court has already been asked to weigh in on a number of election-related disputes, as officials in numerous states have rushed to expand vote-by-mail for the November contest and [change] voting restrictions in response to the coronavirus pandemic.

Among the cases awaiting action from the court is a request from Pennsylvania Republicans to halt a decision from the state’s high court allowing mail-in ballots received three days after the election to be counted. South Carolina Republicans also asked the Supreme Court on Thursday to reinstate its witness requirement for absentee ballots.

…The high court will hear oral arguments for its first sitting remotely and by telephone, [and will provide live audio of the arguments for its October sitting following the same format that was used during its May sitting at the end of the 2019-2020 term] when the coronavirus pandemic forced the Supreme Court in March to close its doors to the public indefinitely.

The 10 cases slated to be argued remotely in October were initially scheduled for March and April, but postponed because of the pandemic. It’s unclear whether the Supreme Court will resume in-person arguments in November.

Decisions in the cases before the justices this term are expected by the end of June 2021.

One of the major legal battles to be heard by the Supreme Court this term is Fulton v. City of Philadelphia.  The justices will [hear oral arguments] on November 4. At issue in the case is whether Philadelphia violated the First Amendment by excluding a religious foster care agency, Catholic Social Services, from its foster care system because the agency declines to place foster children with same-sex couples.

Catholic Social Services is one of 30 agencies in Philadelphia that provides services for foster parents and children, but in early 2018, the city cut off foster care referrals to the agency after learning it did not work with same-sex couples because of its religious objections to gay marriage.

In response to the freeze by Philadelphia officials, Catholic Social Services and a group of foster parents including Sharonell Fulton filed a lawsuit against the city in May 2018, arguing it was targeted by city officials and the decision to stop foster care referrals was unconstitutional.

But the 3rd U.S. Circuit Court of Appeals sided with the city and found it did not treat Catholic Social Services worse than it would have treated another organization that didn’t work with same-sex couples but had different religious beliefs.

[The Washington Free Beacon reports: “Barrett could join the Court in time to participate in the Fulton case assuming Republicans keep to their confirmation schedule, which was on pace for a final vote in late October. That timeline has been thrown into question after three Republican lawmakers tested positive for COVID-19, while others who tested negative are quarantining due to possible exposure to the virus. Senate Republicans are nonetheless signaling that her confirmation process is on track, though they have no margin for error. Barrett will appear before the Senate Judiciary Committee for several days starting Oct. 12.”]

Published by CBSNews .com. Reprinted here for educational purposes only. May not be reproduced on other websites without permission from CBS.

PLEASE NOTE:
The Vice Presidential Debate will be held tonight with
Republican Vice President Mike Pence and Democratic Senator Kamala Harris
Debate Worksheet
Location: University of Utah.
Moderator: Susan Page, USA Today.
The debate will be 90 minutes long.  It will be divided into nine segments of 10 minutes each.

NOTE TO STUDENTS: Before answering the questions, read the “Background” and watch the video under “Resources” below the questions.

1. a) How many justices are on the U.S. Supreme Court?
b) Who is the Chief Justice? Which president appointed him?
c) List the associate justices.

2. What are two election related cases the Supreme Court has been asked to consider?

3. a) How will the justices hear oral arguments this year as a result of Covid-19?
b) What is unusual about the first 10 cases the court will hear?

4. a) What is at issue in the religious liberty case Fulton v. City of Philadelphia?
b) When will the Court hear the case?

6. Represented by religious liberty law firm Becket, Sharonell Fulton and other foster parents licensed through Catholic Social Services filed a federal lawsuit against the city of Philadelphia in May 2018.

a) How do you think the justices should rule on the case? Explain your answer.
b) Challenge: Follow the oral arguments on Nov. 4.

Read more about the cases accepted by the Supreme Court for 2020-21 at the official website:  supremecourt.gov.