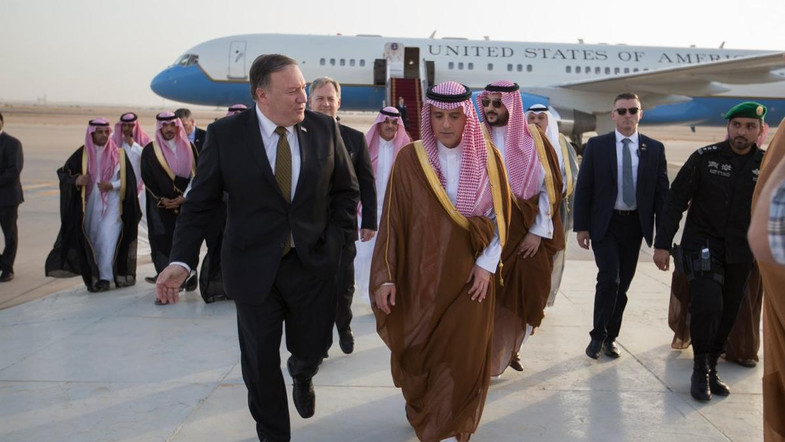 Saudi Foreign Minister Adel al-Jubeir greets US Secretary of State Mike Pompeo as he arrives for their meeting in Riyadh.

(Compiled from reports by Reuters at NY Post with Associated Press at WFMY News2 CBS local) RIYADH – New U.S. Secretary of State Mike Pompeo underscored the need for unity in the Persian Gulf during a brief visit to the Saudi capital on Sunday as Washington aims to muster support among allies for new sanctions against Iran.

Pompeo assured Saudi Arabia that unless there is an agreement by European partners to improve the Iran nuke deal to make sure the Islamic Republic never possesses nuclear weapons, the United States will abandon the 2015 nuclear deal with Iran, [which, though opposed by a large majority of Americans], was [pushed through] by President Barack Obama.

“It supports proxy militias and terrorist groups. It is an arms dealer to the Houthi rebels in Yemen. It supports the murderous Assad regime (in Syria) as well.”

After meeting with Prime Minister Netanyahu in Tel Aviv, Pompeo said, “We remain deeply concerned about Iran’s dangerous escalation of threats to Israel and the region — and Iran’s ambition to dominate the Middle East. The United States is with Israel in this fight.”

Senior State Department officials had said Pompeo would discuss Iran’s behavior in the region and call for sanctions to curb the Islamic Republic’s ballistic missile program during his discussions with Saudi leaders, [who are also greatly concerned with Iran’s nuclear program].

During Sunday’s press conference, Jubeir said, “Iran should be dealt with by imposing further sanctions for its violations of international laws relating to ballistic missiles.”

Iran continues to support Houthi rebels in Yemen by providing military equipment, funding and training in violation of the U.N. Security Council resolutions, Pompeo said. He noted that Houthis routinely fire missiles into Saudi Arabia, threatening Red Sea shipping and the Saudi people.  Yemen’s Houthis have fired over 100 missiles into Saudi Arabia, the latest killing a man in the southern Saudi province of Jizan on Saturday.

The attacks have fueled accusations by the United States and the Saudi-led coalition that Iran is providing the missiles to its Houthi allies. The Islamic Republic [Iran] denies this.

While pledging to help Saudi Arabia “with its defense needs,” Pompeo also stress the necessity for Middle Eastern nations to act. He said:

“America is prepared to stand with Saudi Arabia in pursuit of the shared interests and security [but] the nations of the Middle East cannot wait for American power to crush terrorism for them. Muslim nations must be willing to take on that burden.”

… Saudi Arabia, along with the United Arab Emirates, Bahrain and Egypt, cut off travel and trade ties with Qatar last June, accusing it of supporting terrorism and the countries’ arch-rival Iran on the other side of the Gulf.

Doha [Qatar] has denied the accusations and has said its three fellow Gulf countries aim to curtail its sovereignty. For its part, Iran denies supporting terrorism or having sought to develop nuclear weapons.

The United States, which has military bases in both Qatar and some of the countries lined up against it, is trying to mediate the feud. Trump publicly sided with the Saudis and Emiratis early in the crisis but is now pushing for a resolution to restore Gulf unity and maintain a united front against Iran.

Just hours after being confirmed as Trump’s top diplomat on Thursday, Pompeo set off on a whirlwind trip, first to NATO in Brussels and then to our Middle East allies. [In Brussels, he warned NATO foreign ministers that the U.S. was ready to scrap the Iran deal if it isn’t strengthened “significantly.”]

The trip comes as President Trump considers whether or not to abandon [his] May 12 deadline to end the Iran nuclear deal he [and a large majority of the American public] see as deeply flawed. He has called on Gulf allies to contribute funding and troops to stabilize areas in Iraq and Syria where a U.S.-led coalition has largely defeated Islamic State jihadists. …

President Obama’s 2015 agreement required Iran to limit enrichment of uranium – which can be used for nuclear fuel or for building nuclear weapons. In exchange, most international sanctions against Iran [which were greatly hurting the economy] were removed.

President Obama and the leaders of Russia, China, Germany, Britain and France (the other signatories to the 2015 nuclear pact), claimed it was the best way to prevent Iran from developing nuclear bomb capability. Iran has repeatedly claimed its ballistic missile program has nothing to do with its nuclear weapons and is non-negotiable.

Compiled from reports by Reuters at NY Post and Associated Press at WFMY News2 CBS local. Reprinted here for educational purposes only. May not be reproduced on other websites without permission.

1. a) Who is Mike Pompeo?
b) What did Mr. Pompeo assure Saudi Arabia of regarding U.S. participation in the Iran nuke deal?

2. List the the ways the Iranian regime makes trouble in the region (to its sworn enemy Israel as well as to other Muslim nations).

3. a) What was Secretary of State Pompeo expected to call for during his talks with Saudi leaders?
b) Why does Saudi Arabia want new sanctions placed on Iran, according to Foreign Minister Adel al-Jubeir?

4. While assuring Saudi Arabia the U.S. will help them with their defense needs, what did Mr. Pompeo call on the Saudis and other Middle Eastern nations to do?

5. a) Why do Saudi Arabia and its Gulf allies UAE, Bahrain and Egypt have a problem with Qatar? What action did these allies take against Qatar?
b) What has the U.S. called on the allies to do regarding Qatar? Why is the U.S. pushing for them to resolve their differences?

6. Read the entire “Statement by the President on the Iran Nuclear Deal” made by President Trump on Jan. 12, 2018, which begins:

The Iranian regime is the world’s leading state sponsor of terror. It enables Hezbollah, Hamas, and many other terrorists to sow chaos and kill innocent people. It has funded, armed, and trained more than 100,000 militants to spread destruction across the Middle East. It props up the murderous regime of Bashar al Assad, and has helped him slaughter his own people. The regime’s destructive missiles threaten neighboring countries and international shipping. Within Iran, the Supreme Leader and his Islamic Revolutionary Guard Corps use mass arrests and torture to oppress and silence Iran’s people. Iran’s ruling elite has let their citizens go hungry while enriching themselves by stealing Iran’s national wealth.

a) To keep the U.S. from withdrawing from the Iran nuclear deal, the president says Congress must “fix the deal’s disastrous flaws, or the United States will withdraw.” He is asking for bipartisan legislation regarding the Iran nuke deal. What four provisions does President Trump say must be included in a bill?
b) The majority of Americans opposed the Iran nuke deal. How important do you think it is for Congress to work out such a bill to ensure Iran does not acquire nuclear weapons?