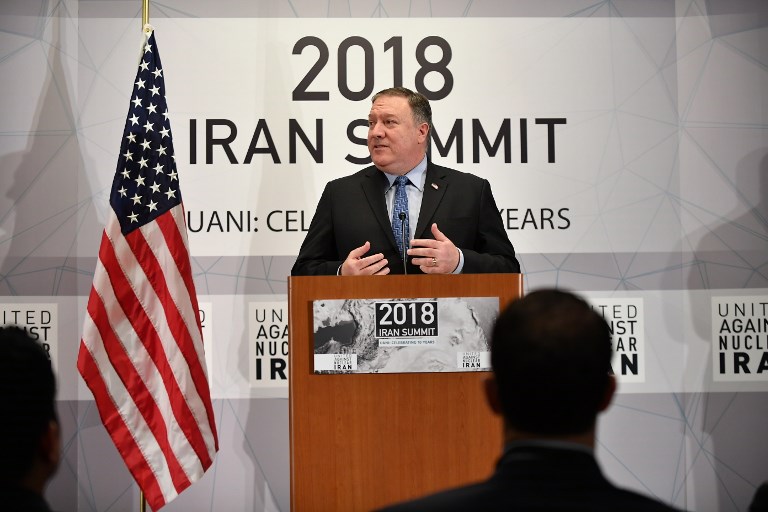 US Secretary of State Mike Pompeo speaks at the United Against Nuclear Iran Summit in New York on September 25, 2018. / AFP photo / Mandel Ngan

(by Michelle Nichols, Reuters) UNITED NATIONS — The United States will push the U.N. Security Council to toughen its stance to prevent Iran from working on ballistic missiles capable of delivering nuclear weapons and carrying out test launches, U.S. Secretary of State Mike Pompeo said on Wednesday.

Pompeo also told the Security Council an arms embargo on Iran should not be lifted in 2020 and called on the council to establish “inspection and interdiction measures, in ports and on the high seas, to thwart Iran’s continuing efforts to circumvent arms restrictions.”

“Iran is harboring al Qaeda, supporting Taliban militants in Afghanistan, arming terrorists in Lebanon, facilitating illicit trade in Somali charcoal benefiting al-Shabaab, and training and equipping Shia militias in Iraq,” Pompeo said during the meeting on the implementation of U.N. sanctions on Iran.

Russia and China – which are council veto powers along with the United States, France and Britain – are unlikely to support the measures proposed by Pompeo. In February Russia vetoed an attempt by the West to have the Security Council call out Tehran in a resolution on Yemen. …

A 2015 U.N. resolution “called upon” Iran to refrain for up to eight years from work on ballistic missiles designed to deliver nuclear weapons. Some states argue that the language does not make it obligatory.

The United States wants the council to toughen that measure, Pompeo said, to reflect language in a 2010 resolution that left no room for interpretation by banning Iran from “activity related to ballistic missiles capable of delivering nuclear weapons, including launches using ballistic missile technology.”

“This Security Council has a responsibility to protect citizens of the Middle East, Americans traveling through the Middle East, Europeans who are now at risk from Iranian missiles,” Pompeo told reporters after the meeting.

The United States, Britain and France have accused Tehran of flouting the current U.N. restrictions on Tehran’s missile program by carrying out ballistic missile launches. Iran says the missiles are not designed to carry nuclear weapons.

Tehran’s Deputy U.N. Ambassador Eshagh al-Habib accused Washington of an “addiction to sanctions and warmongering,” saying Iran was in compliance with its commitments under a 2015 international nuclear deal, which the Trump administration withdrew from in May. …

The U.N. sanctions and restrictions on Iran are contained in the 2015 resolution, which also enshrines the 2015 Iran nuclear deal. European powers have been scrambling to salvage the deal [which the Trump administration has pulled the U.S. out of, citing Iran’s aggressive and untrustworthy behavior].

Additional reporting by Lesley Wroughton in Washington. From Reuters .com. Reprinted here for educational purposes only. May not be reproduced on other websites without permission from Thomson Reuters.

3. Iran was secretly working on nuclear weapons for 20 years before the project was discovered in 2002. Iran says its program is for fuel purposes only, but it has been working on uranium enrichment which is used to make nuclear bombs. The world knows the Iranian regime is lying.
a) What did a 2015 UN resolution call on Iran to do?
b) What does the US want the UN Security Council to do about the supposed vague language in the resolution?
c) How did Secretary Pompeo explain this assertion?

4. Read the “Background” below the questions on the UN Security Council and on the UN’s nuclear Non-proliferation treaty. How are Russia and China able to prevent the U.S., UK and France from implementing stronger sanctions on Iran and clarifying the 2015 UN resolution on Iran?

5. a) What have the US, Britain and France accused Iran of doing?
b) Iran “says” the missiles are not designed to carry nuclear weapons. Why can’t they be believed?

A brief clip from the UN on Dec. 1:  Secretary Pompeo explains Iran’s nuclear testing program, noting that it has grown since the Iran nuke deal:  (to watch the full statement, see the State Department’s YouTube page)