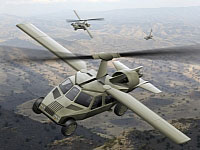 (from Telegraph.co.uk) – U.S. military commanders are considering procuring flying cars to transport troops around the battlefield.

The vehicle would function just like a big four-wheel-drive Humvee when on the ground.

But it would also be able to take off like a helicopter and fly away from trouble or to avoid enemy road blocks.

Part of the American research and development money, worth [$64] million and led by American defense and aerospace [company] AAI, has gone to [the] U.S. [company] Terrafugia which is already developing the world’s first flying production car.

Terrafugia, which has developed the Transition Flying Car , is the largest subcontractor to one of two winning teams.

The vehicle, known as the Transformer, or TX, would have what the project bosses describe as “unprecedented capability to avoid traditional and asymmetrical threats while avoiding road obstructions.” 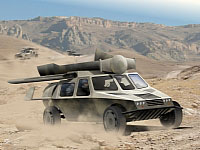 The vehicle will be able to travel 280 miles by land and air, using vertical take-off and landing to increase access to difficult terrain.

It will also have automatic flight controls so it can be flown by non-pilots.

Phase one of the five year, three-phase program will focus on conceptual design of both a prototype and a production vehicle.

Phases two and three will focus on the design and manufacture of the prototype, which could be ready as early as first quarter 2015.

The work calls for Terrafugia’s expertise in drive and flight integration, deployable flight surfaces, and automotive crash safety for an aircraft.

Company chief Carl Dietrich said: “Our strong team of Terrafugia engineers with recent experience designing and building a dual purpose vehicle will bring a unique perspective to the TX program.”

Terrafugia’s Transition flying car is on schedule from detailed design for production in the second half of 2011.

The company is based in Woburn, Massachusetts and was founded by five pilots.

The word terrafugia is Latin for “escape from land.”

1. How would the U.S. military use the Transformer flying vehicle?

2. How would the vehicle function?

3. For what types of missions would the Transformer be used?

4. How far could the vehicle travel?

5. How beneficial do you think a flying humvee would be for U.S. troops in Afghanistan? Explain your answer.

Watch a video on the flying car that is being developed for private use: