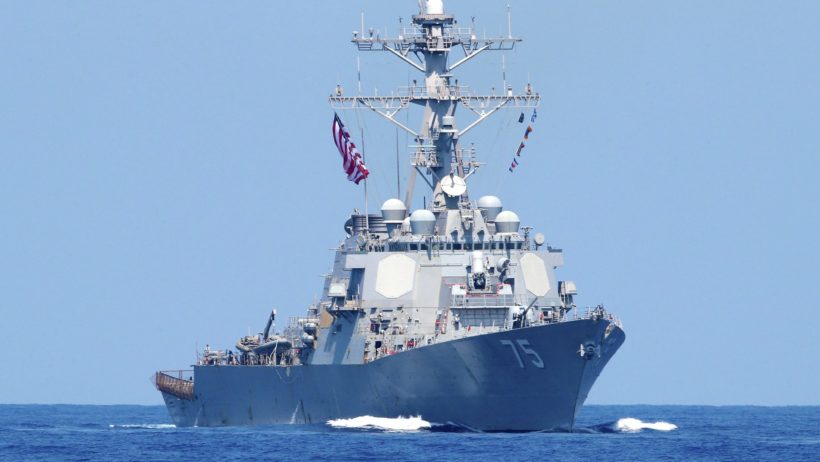 “We must not let the drug cartels exploit the pandemic to threaten American lives,” Trump said. “In cooperation with the 22 partner nations, U.S. Southern Command will increase surveillance, disruption and seizures of drug shipments and provide additional support for eradication efforts, which are going on right now at a record pace.”

Included in the force package are Navy destroyers, other combat ships, Air Force surveillance planes and helicopters, and ten Coast Guard cutter ships, Trump said, noting that the new forces would double U.S. interdiction capacity in the region — and help slow the spread of the coronavirus by reducing illicit travel.

Gen. Mark Milley, the chairman of the Joint Chiefs of Staff, said the United States had obtained intelligence that cartels were seeking to “take advantage” of the coronavirus to smuggle drugs. …

“We came upon some intelligence some time ago that the drug cartels as a result of COVID-19 were gonna try to take advantage of the situation and try to infiltrate additional drugs into our country,” Milley remarked. “As we know, 70,000 Americans die on an average annual basis to drugs. That’s unacceptable. We’re at war with COVID-19, we’re at war with terrorists, and we are at war with the drug cartels, as well.” …

The other assembled officials echoed his message.

“Every year, tens of thousands of Americans die from drug overdose, and thousands more suffer the harmful effects of addiction,” Secretary of Defense Esper said. “Furthermore, corrupt actors, like the illegitimate Maduro regime in Venezuela, rely on the profits derived from the sale of narcotics to maintain their oppressive hold on power. The Venezuelan people continue to suffer due to Maduro’s criminal control of the country.”

“Drug traffickers are seizing on this lawlessness by increasing their illicit activities.  We must do more to prevent these drugs from arriving at our shores.  These enhanced counter-narcotics operations that are now underway will further disrupt the flow of illicit drugs to America, deny our adversaries the financial resources they depend on, and build the capacity of our partner nations throughout the region.” 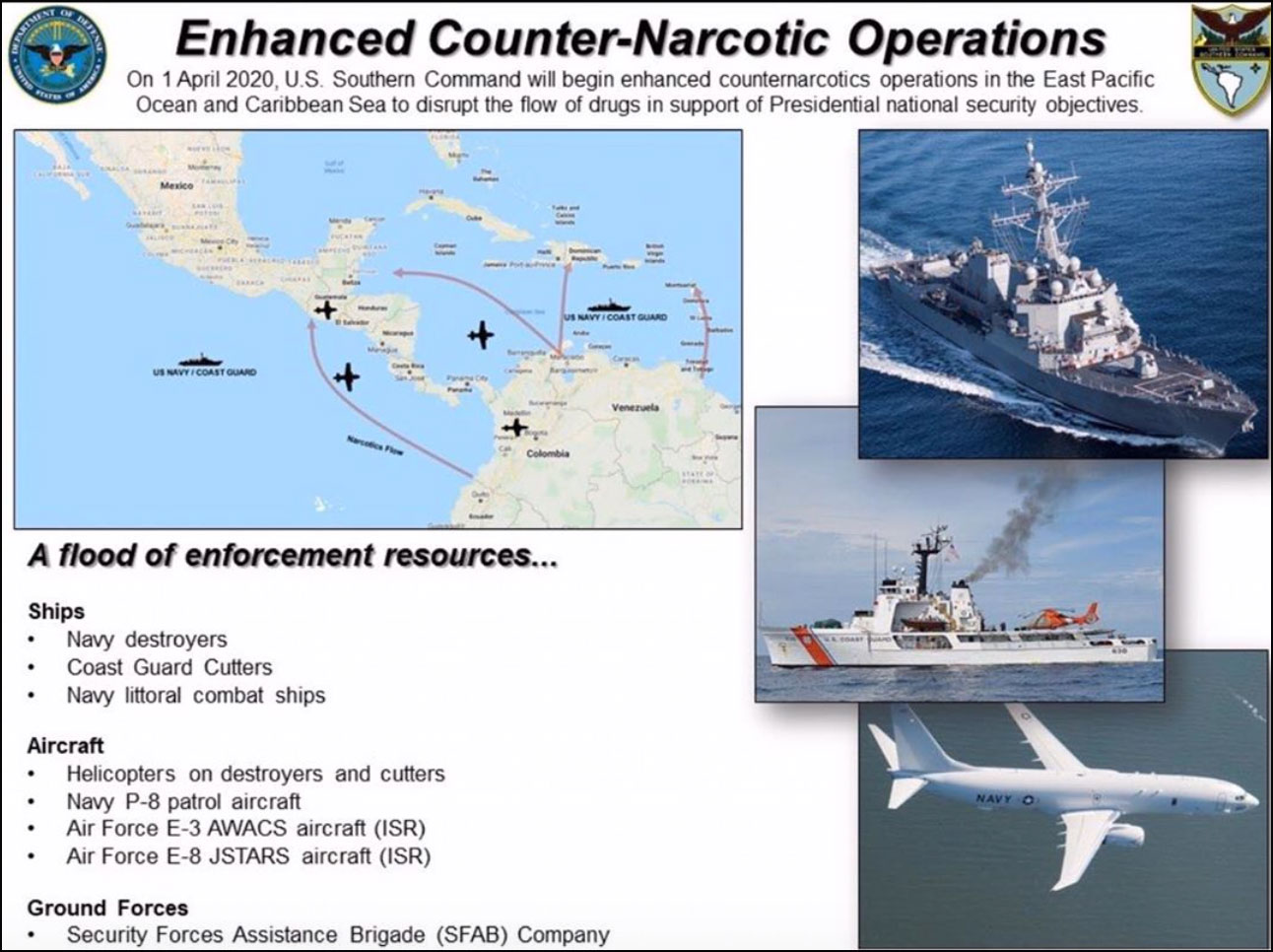 [The previous week, on March 26th,] the Justice Department charged Venezuelan President Nicholas Maduro with narco-terrorism by helping to manage and ultimately leading a smuggling organization known as the Cartel of the Suns, which sought to “flood the United States with cocaine and inflict the drug’s harmful and addictive effects on users in this country” and offered a reward of up to $15 million for his arrest.

Attorney General Barr called the drug crisis situation a “national security threat,” and said the U.S. was not interested in “half-measures” and made the following comments:

Obviously, during this crisis, we’re all focused above all else on COVID-19.  But at the same time, our law enforcement and national security work must go forward, protecting the American people from the full array of threats.

For the Department of Justice, one of our highest priorities must remain destroying the Mexican cartels.  Their trafficking is largely responsible for the deaths, as we all know now, of 70,000 Americans a year.  And also the costs of this don’t count the destroyed families, the destroyed lives, the draining of our national treasure as state budgets are crushed by the burden that this — this narcotic trafficking causes.

The President has made clear that we are in this fight against the cartels to win, and that we are not interested in half measures, and that the threat posed by the cartel is not just a law enforcement threat, but a national security threat as well.

And, in December, building on your success with the Mexican President in forging a cooperative relationship in the area of immigration, you asked me to go down and meet with the President López Obrador and our Mexican counterparts to see if we could also establish a more comprehensive and coordinated effort with the Mexicans in confronting the cartels.  And we’ve had some successful visits and discussions, and currently have an array of activities underway against the cartels.  And we anticipate, along with the Mexicans, that these are going to bear fruit in the months ahead.

But it quickly became clear that we can obtain the most immediate results, the best bang for the buck, where we increase the assets involved in interdiction on both the Pacific and Atlantic side of Mexico in the Central American countries.  For years, the cartels have been using these sea routes to take the cocaine up from, principally, Colombia — now also out of Venezuela.  And these sea routes on both coasts have become the primary means of bringing cocaine up to the United States.

Because of the superb work done by the Defense Department and our intelligence community, we know exactly, most of the time, where these traffickers are at sea.  But we’re significantly — have been up until now significantly limited in our ability to interdict because of the numbers of the assets we have deployed.

Prior today, this limitation meant we could only intercept a fraction of the traffickers that — and the various boats that were detected.  This will now double our capacity, and we are talking about hundreds of tons of cocaine now — we’re now in a position to seize.

So this is going to radically improve our interdiction efforts and put tremendous pressure, we think, on the cartels.  And the effort that SOUTHCOM is undertaking is going to save lives by taking drugs off the street.

Last week, I announced the unsealing of charges of narco-terrorism, drug trafficking, and other crimes against the former Maduro regime — 16 members of that regime — and their involvement in trafficking of 250 metric tons a year.  A lot of that comes by sea, as I discussed at that time.

But also, because of the pressure we’re applying by our sea interdiction, they are trying to establish an air route out of Venezuela, up into Central America, which is one of the reasons we’re trying to move firmly against that corrupt regime.

You know, this drug war has gone on for many decades.  And at times in the past, we’ve had great success and great results.  And at times, we’ve taken our eye off the ball — fortunately, not in this administration. And I’m grateful that you, Mr. President, have brought focus to this fight and the determination to use whatever tools are necessary to win the fight.  The cartels have to be defeated, both for the people of this country and for the people of Mexico and Venezuela.

Read the remarks from the entire hour plus April 1 press conference at whitehouse.gov. or watch the briefing in its entirety at the WhiteHouse youtube page.

Compiled from reports at FoxNews by Gregg Re on April 2 and UPI by Daniel Uria on April 1, and from the Remarks from April 1 Coronavirus Task Force Press Briefing at WhiteHouse .gov. Reprinted here for educational purposes only.

2. a) How many countries will be partnering with the U.S. in these enhanced narcotics operations?
b) What actions will we and our partners be taking to fight the drug cartels?

3. What additional air and sea craft will be included in the massive new counternarcotics operation?

4. a) What intelligence did the U.S. recently obtain, according to Gen. Milley?
b) Why is the U.S. stepping up efforts by almost doubling operations, according to Secretary of Defense Esper?

5. What is the Justice Department’s ultimate goal in the fight against the drug cartels?

6. How important do you think it is to our society to accomplish this goal?

The outbreak of COVID-19 has sent the price of heroin, methamphetamines and fentanyl soaring, as the likes of the Sinaloa cartel – and its main rival, the Jalisco “New Generation” – struggle to obtain the necessary chemicals to make the synthetic drugs, which typically come from China and are now in minimal supply.

“The cartels have suffered from COVID-19 due to the inability to get the regular shipments of synthetic opioids and precursor chemicals for the massive production of meth from China,” Derek Maltz, a former special agent in charge of the Drug Enforcement Administration (DEA) Special Operations Division in New York, told Fox News this week.

“The cartels have continued their production at a slower rate, but the demand seems to be increasing during these times of uncertainty in America. The shutdown of cities in China and travel in and out of China have also negatively impacted the flow of chemicals and drugs to Mexico.”

China, where the virus originated late last year, has, for the most part, halted production on the chemicals required for the making of the drugs as it battles the virus within its own borders and battles to make medical supplies for other crumbling countries.

“Drug cartels and criminal support organizations in the industry global drug trafficking have been deeply affected by the pandemic of the COVID-19,” Johan Obdola, president of the Canada-based Global Organization for Intelligence (IOSI), concurred. “Especially when it comes to the operations of the Sinaloa Cartel, which control 90 percent of the entrance of synthetic drugs to the United States.”

Obdola underscored fentanyl, which originates from China, has become the most coveted cartel commodity in recent weeks.

“In China, according to the Drug Enforcement Agency (DEA), around 5,000 illegal drug laboratories have been processing synthetic drugs and chemicals to process them. Most of these drugs have Europe and North America as the main markets,” he continued. “Cartels bring synthetic drugs through food exports, fruits, automotive equipment, toys and other products that are allocated in an extensive distribution network across the United States. COVID-19 has generated a huge loss in regarding any illegal drugs, and specifically synthetic drugs, not only to Mexican cartels but to most drug cartels operating worldwide.” (from the April 2 FoxNews report by Gregg Re)