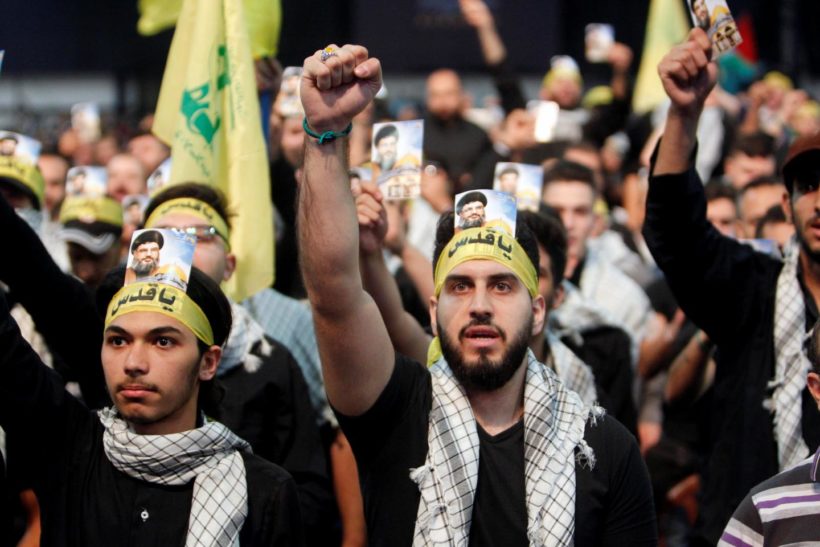 Supporters of Lebanon's Hezbollah leader Sayyed Hassan Nasrallah at a rally in Beirut's southern suburbs in Lebanon on June 23. The U.S. government believes the Lebanese militia is plotting assaults on U.S. soil.

(by Jack Moore, Newsweek) – The U.S. government has issued a $12 million bounty for information leading to the capture of two senior leaders of the Lebanese Shiite [Islamic] militant group Hezbollah who are believed to be plotting attacks on U.S. soil.

Washington is offering $7 million for information that leads to the arrest of Talal Hamiyah and $5 million for Fu’ad Shukr.

“It is our assessment that Hezbollah is determined to give itself a potential homeland option as a critical component of its terrorism playbook,” Nicholas Rasmussen, director of the National Counterterrorism Center, said in a briefing Tuesday. Hamiyah is the leader of Hezbollah’s “international terrorism branch,” a figure with ties to attacks and kidnap plots against Americans, the State Department said.

Shukr is a general for Hezbollah in southern Lebanon, where it shares a border with Israel, a U.S. ally that the militant force considers its archenemy. He has also played a role in Hezbollah’s operations in Syria.

This is the first U.S.-issued bounty for Hezbollah leaders in more than a decade.

A Hezbollah official told the Associated Press on Wednesday the move is part of Washington’s effort to “demonize” the group. The official said the new measures would not hamper the group’s activities in the Middle East.

“It is part of the continuous efforts to demonize Hezbollah. They are false accusations that will not have any effect on the operational activities of Hezbollah,” the official said, speaking on condition of anonymity.

Hezbollah is a proxy of the Iranian government, which funds and arms the group to boost its strength in both Lebanon and Syria, where it is fighting in support of the Syrian President Bashar al-Assad in the six-year civil war.

The decision to place a financial bounty on the two leaders comes as [newly elected president Donald Trump is implementing a much stronger U.S. policy than previous presidents against the agressive] Iranian regime and its activities both at home and abroad.

He has for months taken aim at the landmark? nuclear deal signed between Tehran and world powers in July 2015, threatening to tear up the agreement that was reached after years of negotiating by the international community. [Although a majority of Americans opposed the deal with Iran, President Obama bypassed Congress and signed an executive order in January 2016 which ended the 20-years of sanctions against Iran for pursuing a nuclear weapons program. Then, in August 2016, the Obama administration secretly arranged a delivery of $400 million in cash to Iran on an unmarked plane on the same day Iran released four American hostages.]

Reprinted here for educational purposes only. May not be reproduced on other websites without permission from Newsweek.

3. a) Define proxy.
b) What is Hezbollah? Which government backs this group? Be specific.

4. What is significant about the bounties placed on Hamiyah and Shukr?

5. Read the “Background” and watch the report under “Resources.” Ask a parent or a grandparent:
a) What do you remember about any of the Americans murdered by Hezbollah?
b) Do you support President Trump’s handling of Iran and Hezbollah?
Please explain your answers.

PARTIAL LIST OF SOME OF THE AMERICANS MURDERED BY HEZBOLLAH from a 2012 Wall Street Journal article by Bret Stephens:

Bret Stephens also wrote: “Sensible policy on Iran begins not with the question of how to avoid a war—that war was foisted on us in 1979—but how to win it. Anything less invites further terror and dishonors the memory of Iran’s many American victims.”