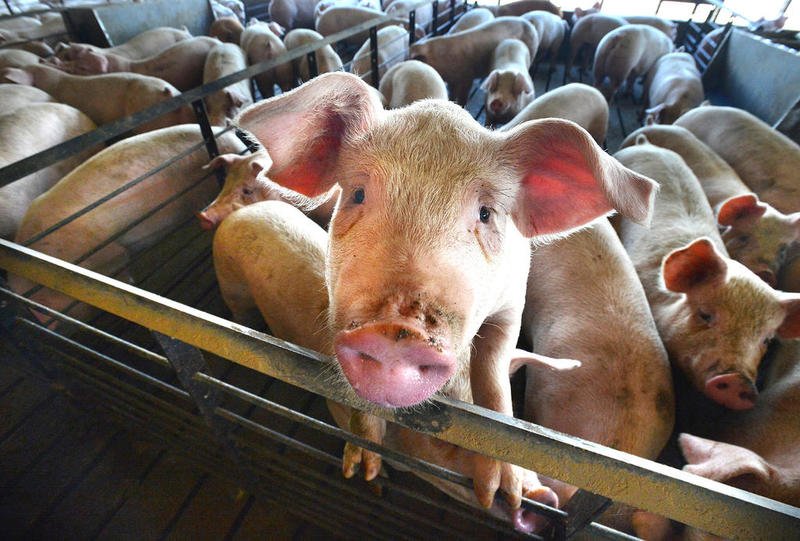 Hurricane Florence threatens to kill thousands of farm animals and trigger spills of waste as it bears down.
North Carolina is the nation's second-largest producer of hogs. They live in row upon row of rectangular barns. Most big factory farms manage the pigs' waste in open-air lagoons that could flood and potentially contaminate rivers and streams.

(by Tom Polansek and P.J. Huffstutter, Reuters) – As powerful Hurricane Florence [moved] closer to the southeastern United States on Tuesday, farmers in North Carolina rushed to harvest corn and tobacco and stock up on pig rations, while the danger of deadly flooding threatened a state where millions of farm animals are housed.

The forecasts for devastating rain and winds also had Smithfield Foods, the largest U.S. pork processor, planning to shut two of its North Carolina plants – including the world’s biggest hog slaughterhouse.

Meanwhile, pig farmers across the state were lowering levels of liquid manure in outdoor storage pits in an effort to avoid a repeat of Hurricane Floyd. The 1999 storm flooded manure pits and contaminated waterways with animal carcasses and waste.

North Carolina is the country’s leading producer of tobacco, second-biggest producer of hogs and a major poultry producer. Its crops include corn, soy and cotton, making agriculture the state’s No. 1 industry, valued at $87 billion.

“The governor said that North Carolina is the bull’s eye of this hurricane,” Larry Wooten, president of the North Carolina Farm Bureau, said in an interview. “I’ll tell you, agriculture is in the heart of that bull’s eye.”

…Two-thirds of North Carolina’s farm income comes from poultry and livestock, including hogs and dairy cattle, according to Wooten. The state has 8.9 million swine, 12 percent of the U.S. herd, U.S. Agriculture Department data showed.

It is unclear how many farm animals are in the storm’s path, according to both Wooten and the North Carolina Poultry Federation.

Two years ago, more than a million poultry birds died when floodwaters from Hurricane Matthew covered areas across central and eastern North Carolina. …

The approaching storm also prompted commodity handler Cargill Inc. to make plans to close meat processing plants in the towns of West Columbia, South Carolina, and Dayton, Virginia, on Friday. Both Cargill and Smithfield said the plant closures were due to safety concerns.

Bo Stone, who raises corn and hogs in Rowland, North Carolina, said he worked into the night to harvest his crop to avoid damage from high winds. On Tuesday, rain halted his progress. “We’ve been running as hard as we can go,” he said.

Stone said relocating animals in the storm zone was not an option for many farmers. “Nobody would have the capacity to handle your animals,” he said.

Tall corn and tobacco crops are most vulnerable to wind damage and difficult to harvest if knocked down, said Rhonda Garrison, executive director of the Corn Growers Association of North Carolina.

“They’re around the clock on corn,” said Andy Curliss, chief executive officer for the NC Pork Council, an industry group.

North Carolina has waived transportation rules to help farmers move crops and livestock ahead of the most severe storm to threaten the U.S. mainland this year. “During harvest, time is of the essence,” Governor Roy Cooper said in announcing a state of emergency. …..

North Carolina hog farmers have been spraying hog manure on farmland to lower the levels of waste in storage pits, known as lagoons, said Andrea Ashby, spokeswoman for the state’s Department of Agriculture and Consumer Services.

“The levels are in pretty good shape to handle the rain, but it all depends on how much rain we get,” Ashby said.

Most manure pits could handle up to 25 inches of rain, Curliss said.

Smithfield Foods said in a statement it has been lowering waste levels as necessary on its farms and encouraging farmers from whom it buys hogs to do the same.

2. a) What problem are pig farmers trying to avoid prior to Hurricane Florence?
b) What steps are they taking to prevent a recurrence?

4. a) What are the main crops and livestock in North Carolina?
b) What percent of the nation’s swine, chickens and turkeys do North Carolina farmers raise?

5. Why is relocating animals in the storm zone not an option for many farmers, according to farmer Bo Stone?

6. What steps has the state government taken to help farmers prior to hurricane landfall?

About 43 percent of North Carolina’s corn has been harvested as of Sept. 9, but none of its soybeans, cotton and peanuts were collected by that date, according to the U.S. Department of Agriculture weekly crop progress report.

Farmer Alex Jordan has already gathered all his corn but wasn’t planning to start harvesting his peanuts for another three weeks and soybeans for more than a month. His farm is located in the southeastern part of the state.

“They are going to have to ride out the storm,” Jordan, 60, said. “I have been through a number of hurricanes but not one with 100 miles per hour winds.”

He also raises about 40 head of cattle that he’s moving to higher ground pastures. He’s put some of his equipment in shelters and is weighing down trailers and tractors by tying them together and filling fuel tanks up with water.

Across the state, livestock and poultry producers are working to get feed on site, move animals away from flood-prone areas and lower waste levels in outdoor lagoons, according to North Carolina’s agriculture department. For tobacco, most of the crop has been collected, but power outages can impact the curing process. (from a Bloomberg report)