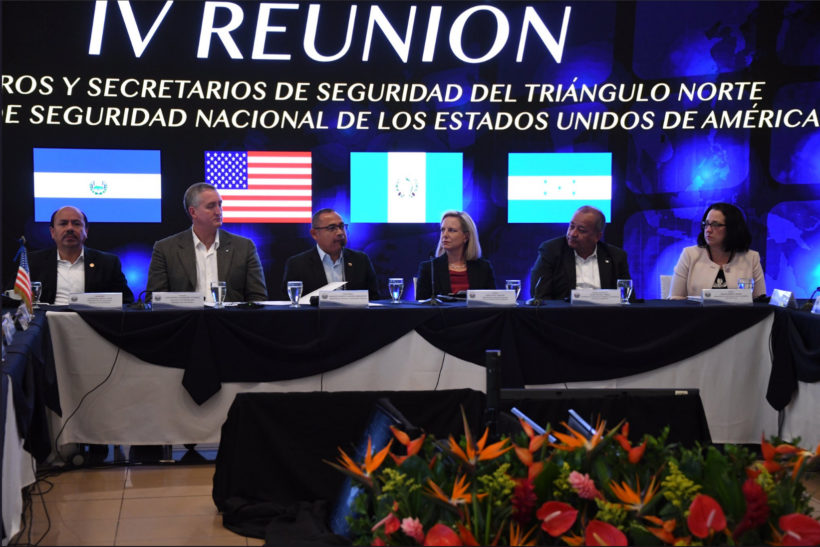 U.S. Secretary of Homeland Security Kirstjen Nielsen met with the leaders of the Northern Triangle countries of Central America: Guatemala, Honduras, and El Salvador, on Febuary 20, 2019.

(by Nelson Renteria, Reuters) SAN SALVADOR – The United States and three Central American nations on Wednesday announced an effort to combat trafficking of people to the U.S.-Mexico border, days after U.S. President Donald Trump declared a national emergency [due to] large-scale unlawful immigration.

U.S. Secretary of Homeland Security Kirstjen Nielsen called illegal immigration from the region a “humanitarian crisis” and said the regional security plan with El Salvador, Guatemala and Honduras would secure the border and improve conditions in the countries.

The total number of people apprehended crossing illegally into the United States from the southwestern border is sharply down from a decade ago, but more families from Central America, citing poverty and violence, are making the journey, many seeking asylum.

President Trump last week declared the situation at the border a national emergency to free up billions of dollars to fund a border wall, a decision that has been challenged in a lawsuit  by 16 Democrat-led U.S. states and another by the American Civil Liberties Union [neither of which is expected to succeed in court].

In a statement, El Salvador’s government said the new initiative was aimed at attacking the finances, logistics and communication platforms of people-trafficking networks.

The three Central American countries will seek to harmonize their legislation for tackling such groups and other criminal gangs, the statement said. Along with the United States, the three countries will increase the use of intelligence-sharing technology.

It was not immediately clear if the United States would provide additional funding for the new effort.

Not all migrants heading north from Central America pay people smugglers to help them cross perilous, drug cartel-controlled territory in Mexico or to ensure their passage across the heavily patrolled U.S.-Mexican border.

Thousands of Central Americans have banded together in so-called caravans this year as a form of protection against the perils that typically stalk migrants headed to the U.S. border.

“Today I ask everyone to show leadership to stop the formation of the caravans that have brought crime, violence and instability to the region,” Nielsen said.

While some caravans have been encouraged by activists, others emerged spontaneously, as news spread through neighborhoods about groups forming to head to Mexico and onward to the United States. …

From Reuters .com. Reprinted here for educational purposes only. May not be reproduced on other websites without permission from Thomson Reuters. Reporting by Nelson Renteria; Writing by Delphine Schrank.

2. Which three countries are joining with the U.S. in this effort?

3. For what reason has the U.S. asked these countries to do their part?

4. What did El Salvador say about the new initiative?

5. How will the three countries work together to be more effective in combating human traffickers?