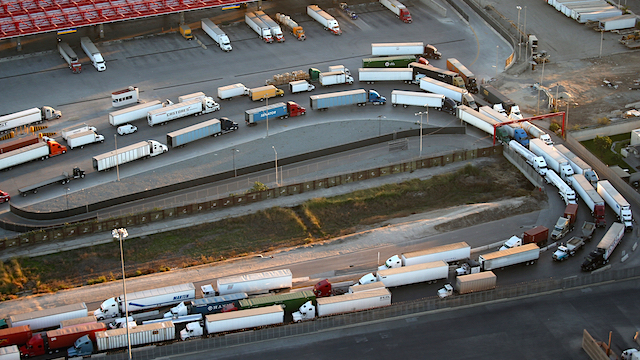 Seen from a U.S. Customs and Border Protection helicopter, a line of cargo trucks crosses from the Mexican side of the border into the U.S. port of entry at Otay Mesa. Otay Mesa is the second busiest cargo port in the southwestern U.S.

The new facility in Tijuana, which aims to reduce congestion and speed cargo crossings into San Diego, overcame resistance in Mexico to letting U.S. officials carry guns. In April, Mexican lawmakers approved changes to the country’s firearms law to permit foreign customs and immigration officials to be armed on the job.

Customs and Border Protection provided few details ahead of the ceremony, saying the effort “represents the shared commitment between the United States and Mexico to promote economic growth and prosperity between the two countries connected by more than just a shared border.”

It is the latest demonstration of closer border ties. Last month, a group of U.S. and Mexican investors opened an air terminal in San Diego with a bridge that crosses a razor-wire border fence to Tijuana’s existing airport, believed to be the only cross-border airport outside the European Union.

In October, Mexican authorities began inspecting Mexico-bound cargo at the airport in Laredo, Texas. U.S. authorities plan to inspect U.S.-bound trucks in San Jeronimo, in the Mexican state of Chihuahua, near the border cities of Ciudad Juarez and El Paso, Texas.

Cargo has long been inspected in the U.S. and in Mexico. The new “pre-inspection” facilities effectively meld two stops into one.

Alejandra Mier y Teran, executive director of the Otay Mesa Chamber of Commerce in San Diego, said authorities told her that truck inspections in Tijuana will initially be limited to fresh produce that is deemed to be low risk for spreading pests or disease. Eventually more products may be eligible.

“It will be very beneficial for those who use it, but the potential is even greater,” Mier y Teran said.

The larger significance is that U.S. and Mexican officials will work under the same roof, sharing intelligence and other information, said Christopher Wilson, deputy director of the Woodrow Wilson Center for International Scholars’ Mexico Institute.

“They’re going to get to know each other better than ever before,” Wilson said. “This is really joint border management in its early stages.”

Plans for the joint inspection facilities have long been in the works but faced resistance in Mexico over allowing U.S. agents to be armed.

“Mexico has been very sensitive about U.S. agents operating on Mexican soil for the last couple centuries, since the Mexican-American War but particularly since the 1980s,” Wilson said. “It’s an issue of national sovereignty. The fact that they are willing to do this shows Mexico doesn’t just have a narrow conception of what that means.”

Reprinted here for educational purposes only from CBS Dallas Fort Worth. May not be reproduced on other websites without permission from dfw.cbslocal .com.

2. What is the purpose of the new U.S. border facility over the border in Tijuana, Mexico?

3. Why hadn’t the U.S. conducted inspections from the Mexican side of the border before now?

4. What other inspection stations have Mexican and U.S. agents established?

5. The AP reporter quotes the director of Mexico Institute as saying, ”Mexico has been very sensitive about U.S. agents operating on Mexican soil for the last couple centuries, since the Mexican-American War but particularly since the 1980s.It’s an issue of national sovereignty. The fact that they are willing to do this shows Mexico doesn’t just have a narrow conception of what that means.”
What do you think could be another reason that Mexican lawmakers have done a complete turnaround on this issue? (What might have motivated them to change their minds fairly abruptly?) If you have no idea, ask a parent or grandparent what he/she thinks.

U.S. Rep. Robert “Beto” O’Rourke, D-El Paso, said he was surprised by the change because as recently as last year (2014), members of the Mexican Congress voiced their opposition to arming U.S. federal agents during a meeting of the U.S.-Mexico Interparliamentary Group.

“They said, ‘If you can’t understand this, you don’t understand how important Mexican sovereignty is and this will never happen,'” O’Rourke said. “So I’m really happy about the prospect that this will speed up travel times for trade and cargo coming through ports of entry. Texas really stands to be the [main] beneficiary of this.”  (from a June 2015 Texas Tribune report)