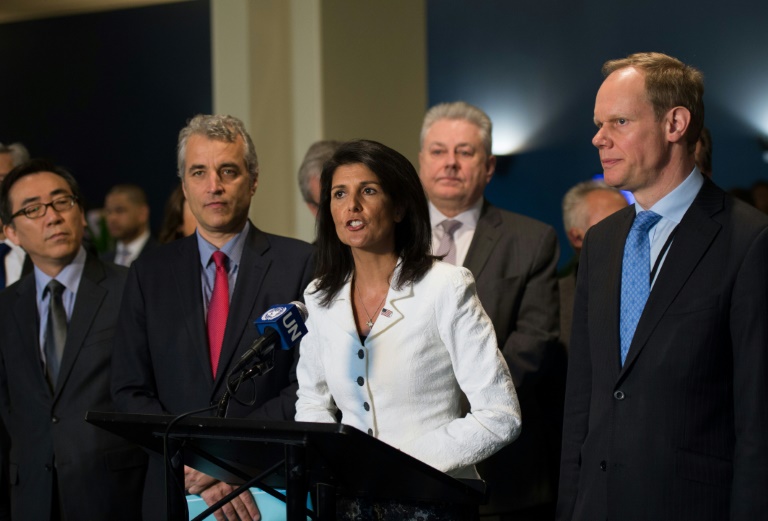 (Compiled from reports at The New York Times and Reuters) UNITED NATIONS — Saying the time was not right to outlaw nuclear arms, the United States, Britain and France – and almost 40 other countries – did not join talks on a treaty to ban nuclear weapons that started at the United Nations this week.

“There is nothing I want more for my family than a world with no nuclear weapons,” U.S. Ambassador to the UN Nikki Haley told reporters outside the General Assembly as the talks were getting underway. “But we have to be realistic. Is there anyone who thinks that North Korea would ban nuclear weapons?”

Ambassador Haley told reporters the countries skipping the negotiations are instead committed to the Non-Proliferation Treaty (see “Background” below) which entered into force in 1970 and is aimed at preventing the spread of nuclear weapons and weapons technology.

Ms. Haley and other ambassadors standing with her, including envoys from Albania, Britain, France and South Korea, declined to take questions.

The United Nations General Assembly adopted a resolution in December – 113 in favor to 35 against, with 13 abstentions – that decided to “negotiate a legally binding instrument to prohibit nuclear weapons, leading towards their total elimination” and encouraged all member states to participate.

The talks, supported by more than 120 countries, were first announced in October and are led by Austria, Brazil, Ireland, Mexico, South Africa and Sweden. Disarmament groups strongly support the effort.

The United States and most other nuclear powers, including Russia, oppose the talks.

“You are going to see almost 40 countries that are not in the General Assembly today,” Haley said. “In this day and time we can’t honestly that say we can protect our people by allowing the bad actors to have them and those of us that are good, trying to keep peace and safety, not to have them.”

The talks come against the backdrop of increasing worries over the intentions of a reclusive North Korea, which has tested nuclear weapons and missiles that could conceivably carry them. Defying international sanctions, the North Koreans have threatened to strike the United States and its allies with what North Korea’s state news media has called the “nuclear sword of justice.”

“The UK is not attending the negotiations on a treaty to prohibit nuclear weapons because we do not believe that those negotiations will lead to effective progress on global nuclear disarmament.”

Ambassador Haley and Ambassador Rycroft emphasized that the U.S. and Britain have vastly reduced the size of their nuclear arsenals since the height of the Cold War.

“In the current perilous context, considering in particular the proliferation of weapons of mass destruction and their means of delivery, our countries continue to rely on nuclear deterrence for security and stability,” Lamek said.

Ms. Haley questioned whether countries favoring a weapons ban understood the nature of global threats. Referring to nations participating in the talks, she said, “You have to ask yourself, are they looking out for their people?”

Ms. Haley’s counterparts from Russia and China, both veto-wielding permanent members of the Security Council, did not join her protest group. But they are not participating in the talks.

Foreign Minister Sergey V. Lavrov of Russia said in Moscow last week that his government did not support a global nuclear weapons ban, essentially agreeing with the American position.

“Efforts to coerce nuclear powers to abandon nuclear weapons have intensified significantly recently,” Tass – the Russian government’s  news agency quoted him as saying. “It is absolutely clear that the time has not yet come for that.”

Compiled from news reports at The New York Times and Reuters published on March 27. Reprinted here for educational purposes only. May not be reproduced on other websites without permission.

2. a) Who is the U.S. Ambassador to the UN?
b) How did the Ambassador explain the reason for not joining the group that wants all countries to ban nuclear weapons?
c) Do you agree with Ambassador Haley? Explain your answer.

4. How did Britain’s Ambassador explain his government’s decision?

5. What did the French Ambassador say about a nuclear weapons ban treaty?

6. What has North Korea done recently that is of concern to the world?

7. Do you think the resolution adopted by 120 UN member countries to “negotiate a legally binding instrument to prohibit nuclear weapons, leading towards their total elimination” is a realistic, reasonable goal, or do you agree with the U.S. [Trump administration] and 40 others who oppose such a measure at this time? (Remember, for the U.S., this is a departure from the past 8 years under President Obama, who had a goal of creating a nuclear weapons-free world.) Explain your answer.

The following is an unofficial list of the 101 states that attended the organizational meeting on February 16, 2017 to prepare for negotiations on the treaty prohibiting nuclear weapons. There were also three observers: Holy See, Palestine and the European Union. (from the International Campaign to Abolish Nuclear Weapons website)