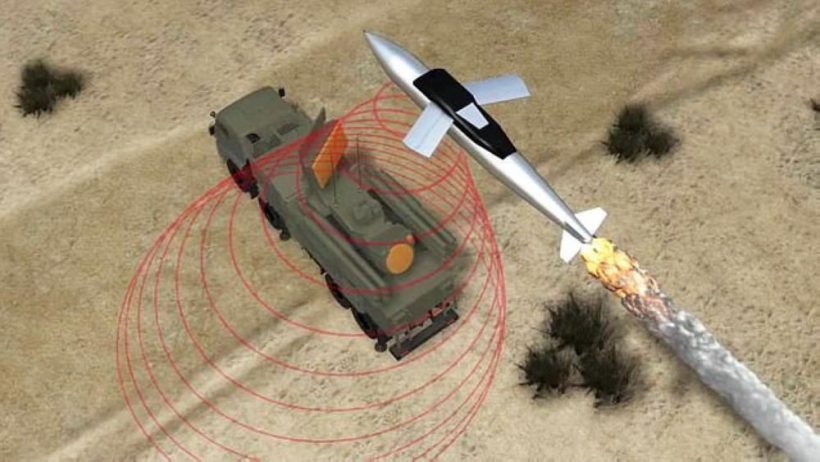 (by Ronald Kessler for UK Daily Mail) – The U.S. Air Force has deployed at least 20 missiles that could zap the military electronics of North Korea or Iran with high-power microwaves, rendering their military capabilities virtually useless without causing any fatalities….

Known as the Counter-Electronics High Power Microwave Advanced Missile Project (CHAMP), the missiles were built by Boeing’s Phantom Works for the U.S. Air Force Research Laboratory (AFRL) and tested successfully in 2012. They have not been operational until now.

The microwave weapons are fitted into an air-launched cruise missile and delivered from B-52 bombers. With a range of 700 miles, they can fly into enemy airspace at low altitude and emit sharp pulses of high power microwave (HPM) energy that fry computer chips, disabling any electronic devices targeted by the missiles without causing any collateral damage.

Mary Lou Robinson, the chief of the High Power Microwave Division of the Air Force Research Lab at Kirtland Air Force Base, confirmed that the missiles are now operational and ready to take out any target.

The missile is equipped with an electromagnetic pulse cannon. This uses a super-powerful microwave oven to generate a concentrated beam of energy. The energy causes voltage surges in electronic equipment, rendering them useless before surge protectors have the chance to react.

The project has been advancing secretly ever since the Air Force successfully tested a missile equipped with high power microwave (HPM) in 2012.

In the 2012 test, the CHAMP missile flew over a two-story building on the Utah Test and Firing Range.

The building in the west Utah desert was crammed with computers and security and surveillance systems. The microwaves took down the compound’s entire spectrum of electronic systems, including video cameras set up to film the test, without damaging anything else.

“We hit every target we wanted to,” Boeing’s CHAMP Program Manager Keith Colman said in a company press release. “Today we made science fiction into science fact.”

Until the announcement of the successful test, the project had been top secret. When it was announced, only a few trade publications ran the story. …

[Due to] sequestration budget cuts, the CHAMP missiles did not become operational under the Obama administration. But after I [reporter Ronald Kessler] emailed then Trump National Security Adviser H. R. McMaster in August 2017 information about CHAMP that I was about to include in my book,…he thanked me for letting him know about the capability, agreed to an interview, and ordered a briefing from the Pentagon.

As a result, the Pentagon funded the program and ordered Air Force training worldwide to deploy and operate the missile systems.

The beauty of the HPM missile is that its microwave beam can penetrate bunkers where facilities are hidden without harming humans inside.

Even if a bunker is buried in a mountain, HPM penetrates the facilities through its connections to power cables, communication lines, and antennas. Thus, HPM can penetrate any underground military facility and destroy its electronics.

Targeted at command and control centers, the missile could render any country’s military inoperable. And one missile can hit multiple targets in succession.

While North Korea or Iran may attempt to shield their equipment, U.S. officials doubt that would be effective against CHAMP.

Besides underground bunkers and command centers, HPM can quickly disable fighter planes, tanks, ships, and missile systems. And it can wipe out facilities for developing and testing nuclear weapons.

Most amazing of all, the missile renders inoperable any radar that might detect it as it flies to and from a target. Thus, a country cannot take out CHAMP before it strikes and has no way of knowing why its facilities have suddenly gone dead. …

The CHAMP missiles are entirely different from cyber-warfare designed to confuse computers. Unlike a cyberattack, CHAMP permanently fries electronic equipment.

CHAMP missiles emitting HPM also differ from an electromagnetic pulse (EMP) attack that is created by detonating a nuclear weapon in the atmosphere. Because it is targeted, HPM leaves intact civilian facilities needed to sustain life.

America’s national laboratories operated by the Department of Energy have been working on HPM capabilities for decades.

Published at UK DailyMail .com. Reprinted here for educational purposes only. May not be reproduced on other websites without permission from the Daily Mail.

2. What can Boeing/US Air Force CHAMP missiles do? Be specific.

3. How does the CHAMP missile work?

4. a) How do high power microwave missiles differ from cyber warfare?
b) How do they differ from EMPs?

“In response to a number of troubling and escalatory indications and warnings, the United States is deploying the USS Abraham Lincoln Carrier Strike Group and a bomber task force to the U.S. Central Command region to send a clear and unmistakable message to the Iranian regime that any attack on United States interests or on those of our allies will be met with unrelenting force,” National Security Adviser John Bolton said earlier this month. “The United States is not seeking war with the Iranian regime, but we are fully prepared to respond to any attack, whether by proxy, the Islamic Revolutionary Guard Corps, or regular Iranian forces.”

President Donald Trump will reportedly visit South Korea next month to discuss with South Korean President Moon Jae-in how to deal with the latest missile tests from North Korea.

a) Officials from North Korea and Iran are talking tough as their aggressive actions are met with firmness by the Trump administration.
Considering the constant threats from these rouge regimes, how do you think the leaders of these countries will react upon learning that the U.S. possesses such a weapon? (Would this cause them to think that it might be in their best interests to negotiate with the U.S., or would it cause them to carry out their threats? – If so, what should we do then?)

b) Both regimes have nuclear weapons programs they developed in secret in defiance of the United Nations Nuclear Non-Proliferation Treaty. They are not to be trusted. The CHAMP system was successfully tested in 2012 but then shelved by the Obama administration due to sequestration budget cuts. The Pentagon under Obama did not fund the program, or appear to prioritize it; the Pentagon under Trump funded it quickly. Considering the threats from Iran and North Korea, which have been continuous for decades, how important is it to have this new technology fully operational?

c) Do you think the U.S. should launch a pre-emptive attack (small or large) on Iran or North Korea’s nuclear facilities? Explain your answer.

6. Reporter Ronald Kessler writes in paragraphs 10-11:
[Due to] sequestration budget cuts, the CHAMP missiles did not become operational under the Obama administration. But after I [reporter Ronald Kessler] emailed then Trump National Security Adviser H. R. McMaster in August 2017 information about CHAMP that I was about to include in my book,…he thanked me for letting him know about the capability, agreed to an interview, and ordered a briefing from the Pentagon. As a result, the Pentagon funded the program and ordered Air Force training worldwide to deploy and operate the missile systems.

This is hard to believe. Did it really take this reporter to inform the Pentagon of this program? If the system is all Boeing and the Air Force says it is – warfare without casualties (collateral damage) – could it be possible that the people in the Pentagon did not work harder to make it operable once the 2012 test was a success? What do you think?