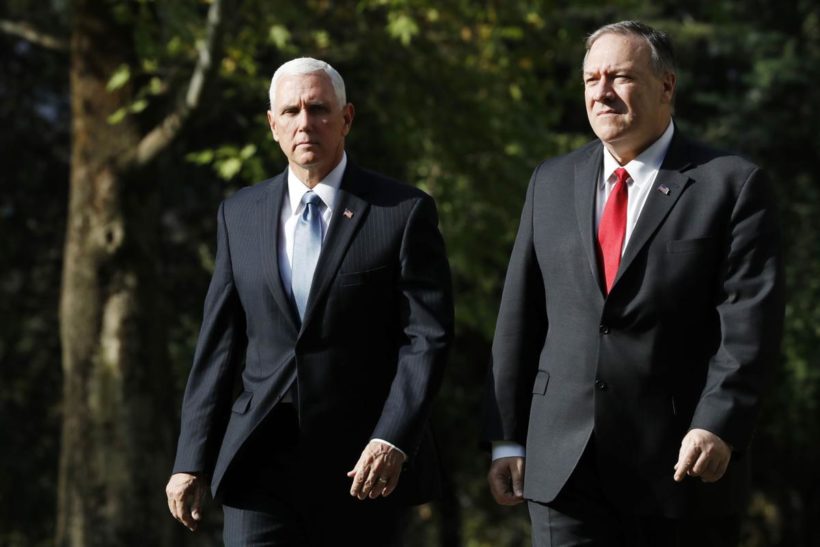 (by Nicholas Sakelaris, UPI) — U.S. officials said Thursday Turkish President Recep Tayyip Erdogan has agreed to stop its offensive in Syria, signaling an end to a military campaign that has so far killed dozens of Kurdish fighters and drawn international condemnation.

U.S. Vice President Mike Pence announced the agreement for a five-day cease-fire after hours of bilateral meetings in Ankara among U.S. and Turkish officials — which included Erdogan and Secretary of State Mike Pompeo. [The agreement mandates the ceasefire of military operations while the U.S. facilitates the withdrawal of YPG Kurds from the Safe Zone. Once completed, Turkey has agreed to a permanent ceasefire.] The situation will be re-evaluated at the end of the five-day deal. [President Trump will remove the economic sanctions he imposed once the permanent ceasefire is implemented.]

Erdogan’s forces began Operation Peace Spring a week ago in northeast Syria, to clear border territories of Kurdish fighters so Ankara can send back Syrian refugees who fled to Turkey. The Turkish leader has previously insisted he would accept no cease-fire.

“The United States and Turkey have both mutually committed to a peaceful resolution and future for the safe zone, working on an international basis to ensure that peace and security defines this border region with Syria,” Pence said.

Erdogan’s offensive was designed to create a “safe zone” for the return of thousands of Syrian refugees who’d fled to Turkey. It targeted Kurdish fighters in the border region, whom Ankara considers terrorist, to make way for the refugees’ repatriation. Turkish officials have said hundreds of Kurdish fighters have been “neutralized” since the incursion began a week ago.

U.S. President Donald Trump applauded the resolution, saying “millions of lives will be saved.” Earlier, he’d said the Turkish invasion is “not our problem.” …

Erdogan initially refused to meet with Pence and Pompeo Thursday, saying he would only deal diplomatically with Trump. He relented late Wednesday. 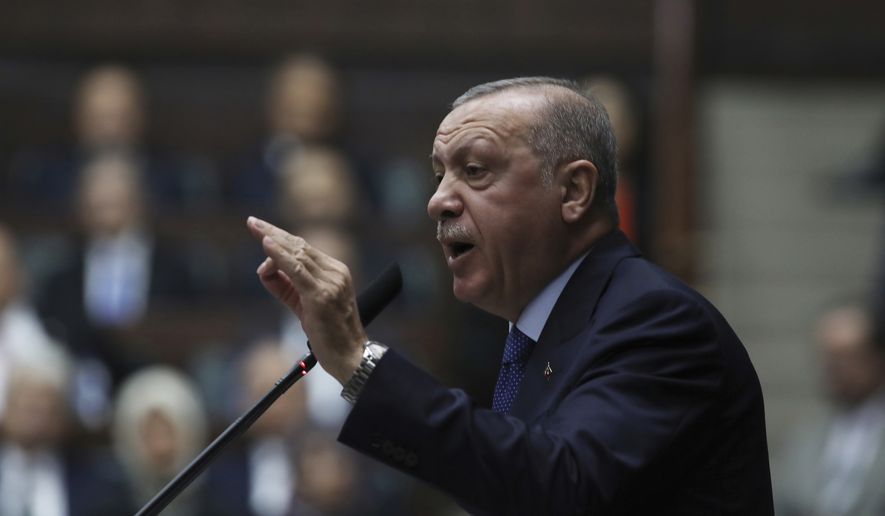 Turkish President Recep Tayyip Erdogan (above) said Wednesday he would refuse to meet with Vice President Mike Pence. “I’m not going to talk to them. …When Trump comes here, I’ll be talking” he said.
“We will never declare a cease-fire,” Mr. Erdogan also told reporters earlier in the week. “They [the U.S.] are pressuring us to stop the operation. They are announcing sanctions. Our goal is clear. We are not worried about any sanctions.”

“I don’t agree with his construct that Turkey’s invasion of Syria is of no concern,” the South Carolina senator said.

BBC News reported Thursday that Trump urged Erdogan, in a letter dated Oct. 9, against the military offensive in Syria.

The report said Erdogan “thoroughly rejected” the letter at the time and “put it in the [trash] bin.” (see letter under “Resources” below)

NOTE: Prior to departing for Turkey, Secretary Pompeo addressed criticism of the effectiveness of U.S. sanctions against Turkey. During an interview with Maria Bartoremo on Fox Business News he said:

“We have to remember, this is a complex situation Maria. You saw the initial set of sanctions that the president chose to put on Turkey. I think, frankly, the world has underappreciated the severity of those sanctions and how much impact they will ultimately have on the Turkish economy.”

CNBC reported: Trump on Monday had signed an executive order sanctioning Turkish officials, hiking tariffs on Turkish steel up to 50% and “immediately” halting trade negotiations with the country. Turkish markets the following day were relatively flat, with the country’s lira actually firming against the dollar as analysts described the penalties as “not very serious” and “window dressing.”

2. What will take place during the five day temporary cease-fire?

3. What has President Trump agreed to do once the permanent ceasefire is implemented?

4. a) What two things did President Erdogan initially refuse to do before quickly changing his mind?
b) Why do you think he reversed course?

5. a) What did President Trump urge/warn President Erdogan to do in a letter he sent to him on October 9?
b) How did Erdogan initially respond to Trump’s letter?

On October 14, President Trump announced he would issue an Executive Order authorizing the imposition of sanctions against Turkey over the Kurds in Syria. 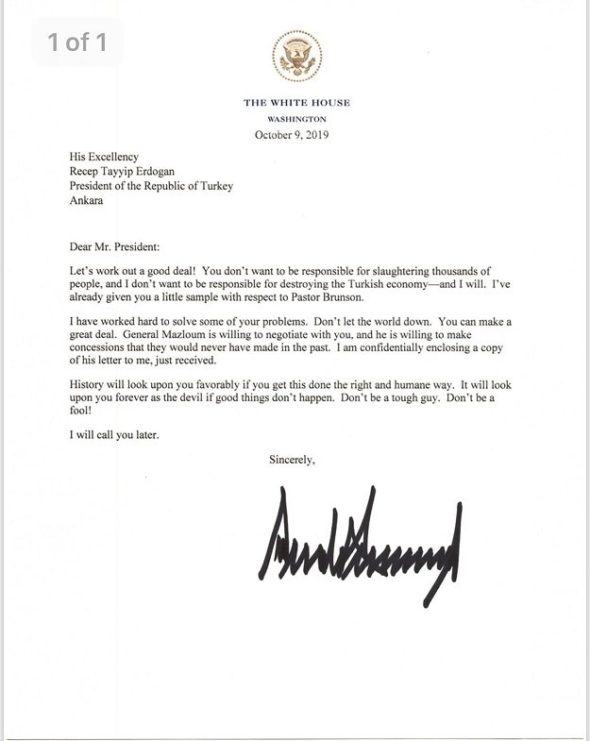 On Oct. 16, the White House released a copy of the letter President Trump sent to Turkey’s Preisdent Tayyip Erdogan, who when he received it reportedly “throughly rejected” the letter and “put it in the [trash] bin.”