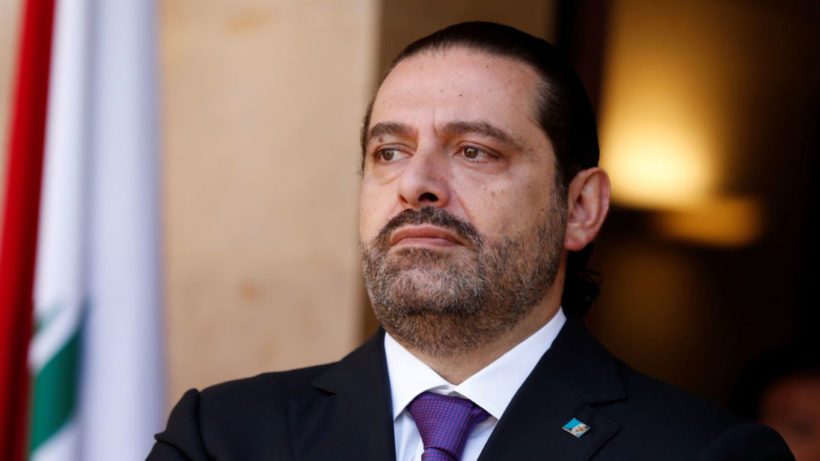 Lebanon's Prime Minister Saad al-Hariri is seen at the governmental palace in Beirut, Lebanon October 24, 2017. The PM resigned on Saturday, saying he believed that there is an assassination plot against him. (Photo: Reuters//Mohamed Azakir)

(Compiled from reports from BBC News and by Angus McDowall ay Reuters, Nov. 4) – Lebanese Prime Minister Saad al-Hariri (a Sunni Muslim) resigned on Saturday, saying in a televised broadcast from Saudi Arabia that he feared for his life, while also fiercely criticizing Iran.

He accused Iran of sowing “fear and destruction” in several countries, including Lebanon.

Mr. Hariri’s father, former Prime Minister Rafik al-Hariri, was assassinated in a 2005 Beirut bomb attack that pushed his son into politics and set off years of turmoil. A U.N.-backed tribunal has charged five Hezbollah members over the killing. (The Iranian and Syrian governments are also believed to be involved in Hariri’s assassination.)

Mr. Hariri has been prime minister since December 2016, after previously holding the position between 2009 and 2011.

“We are living in a climate similar to the atmosphere that prevailed before the assassination of [my father] martyr Rafik al-Hariri,” he said in the broadcast from the Saudi capital Riyadh.

“I have sensed what is being plotted covertly to target my life.”

The Saudi-owned pan-Arab television channel al-Arabiya al-Hadath reported that an assassination plot against Hariri was foiled in Beirut days ago, citing an unnamed source.

Saudi Arabia’s Gulf Affairs Minister Thamer al-Sabhan said in a television interview that Hariri’s personal security detail had “confirmed information” of a plot to kill him. Addressing “Iran and its followers” he said Lebanon would “cut off the hands that wickedly extend into it.”

It was not immediately clear who might succeed Hariri, Lebanon’s most influential Sunni politician. The prime minister must be a Sunni in Lebanon’s sectarian system. President Aoun must appoint the candidate with most support among MPs, who he is expected to consult in the coming days.

Hariri’s coalition, which took office last year, grouped nearly all of Lebanon’s main parties, including Hezbollah. It took office in a political deal that made Michel Aoun, a Maronite Christian and Hezbollah ally, president, and was seen as a victory for Iran. The resignation risks exacerbating sectarian tensions between Sunni and Shi‘ite Muslims and returning Lebanon to paralysis in government.

Sunni Muslim Saudi Arabia, a political ally of Hariri, is locked in a bitter tussle for power across the Middle East with Shi‘ite Iran and its allies, including Hezbollah.

Hariri said Hezbollah and Iran had brought Lebanon into the “eye of a storm” of international sanctions. Iran was sowing strife, destruction and ruin wherever it went and he accused it of a “deep hatred for the Arab nation.”

2.  a) list the who, what, where and when of the news item
b) For what reason are Iran and Hezbollah opposed to Prime Minister Hariri?
c) With what country is Mr. Hariri allied?
d) Why is Prime Minister Hariri’s resignation so concerning?
e) Read the “Background” below and watch the videos under “Resources.” List 3 facts you learned that you think are most important for people to know about this news story.

Hezbollah, whose name means “party of God,” is a terrorist group believed responsible for nearly 200 attacks since 1982 that have killed more than 800 people. It was founded in 1982 in Lebanon’s Bekaa Valley by a Shia clergyman educated in Iran. Hezbollah’s stated objectives include:

Hezbollah is an umbrella organization of various radical Islamic Shi’ite groups and organizations which receives substantial financial and philosophical support from Iran. Hezballah is supported by Syria and is financed by Iran. On the U.S. State Department’s list of terrorist organizations, Hezballah reportedly possesses an estimated 10,000 rockets capable of reaching major Israeli population centers.

In 2006, Hezbollah fighters raided an Israeli border post and kidnapped two soldiers. This touched off a war between Israel and Hezbollah that lasted a month until the Israeli and Lebanese governments agreed to a cease-fire under a United Nations Security Council deal, resolution 1701.