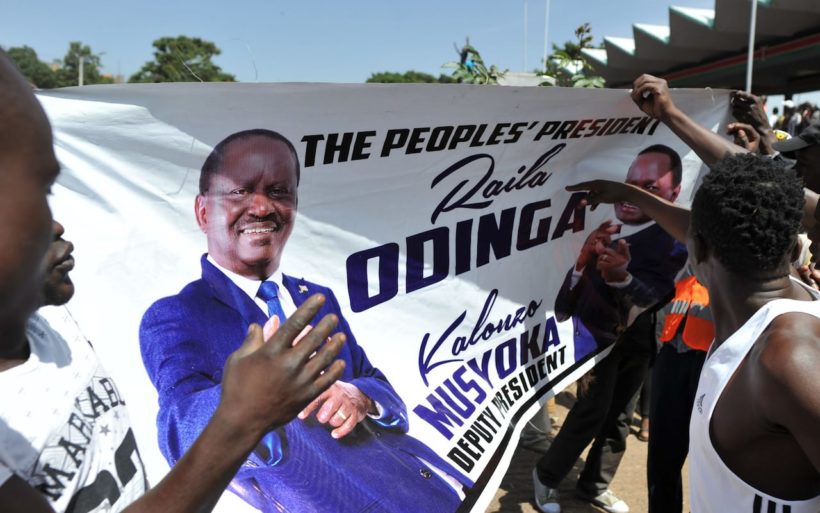 Kenya’s presidential elections were first held in August but the courts ordered a re-run, saying President Uhuru Kenyatta’s victory was marred by irregularities. Kenyatta won the election re-run in October, but his opponent Raila Odinga boycotted it. Kenyatta was sworn in for a second term in November.  In January, Odinga, at the urging of lawyer Miguna Miguna, declared himself the “people’s president” and held an inauguration ceremony for himself in the capital. Thousands of his supporters attended the event, despite a government warning that it amounted to treason. The authorities shut down TV stations that were covering the alternate inauguration.

(by Adrian Blomfield, UK Daily Telegraph) Nairobi — Kenya’s government ignored Western pressure and flouted its own judges Friday after it refused to suspend an unprecedented shutdown of independent television stations.

Escalating a broader clampdown, police also arrested a second prominent opposition figure, prompting a renewal of the political violence that has claimed scores of lives since Kenyans voted in a disputed election last August.

The country’s three largest independent television stations remained off the air for a fourth day as Uhuru Kenyatta, Kenya’s president, showed no sign of letting up in his campaign of vengeance against journalists who chose to defy him.

Despite personally being ordered not to by President Kenyatta, the three stations on Tuesday broadcast the build up the parallel inauguration of Raila Odinga, the opposition leader.

Mr. Odinga had himself sworn in as “the people’s president” after refusing to accept his rival’s victory in two elections last year, the first of which was overturned by the supreme court, the second boycotted by the opposition.

Ending an intense period of quiet diplomacy, the United States condemned what it characterised as a government attempt to “shut down, intimidate and restrict the media.”

“Freedom of expression, including for members of the media, is essential to democracy,” the State Department said in a statement.

“We urge the Government… to implement court orders calling for the restoration of television broadcasts.”

Britain has echoed the US call, although both states have also condemned Mr. Odinga for creating a parallel government. Although a Kenyan activist, Okiya Omtatah, won a court ruling suspending the shutdown, the government communications authority refused to receive the written order, raising fears about the rule of law in one of Africa’s most advanced democracies.

Police first detained a courier sent by Mr. Omtatah to deliver the order, and then ripped up a second copy he attempted to hand over in person.

[Following an order by] Mr. Kenyatta…police have also mounted a three-day stakeout of one television station, NTV, in an attempt to arrest three of the country’s best known broadcast journalists.

The three won a temporary reprieve when a court ordered police to question the journalists before arresting them on undisclosed charges.

An outspoken opposition figure involved in Mr. Odinga’s swearing was less fortunate after police allegedly blew open the doors of his house and seized him in an early morning raid.

…At least 92 people have been killed in election-related violence since August.

The article above published at UK Daily Telegraph on Feb. 2, 2018.

1. For KENYA, give the following information:

2. For KENYA:
a) list the who, what, where and when of the news item
b) Kenya is a democracy. Following a re-run of the presidential election, incumbent Kenyatta was declared the winner. Opponent Odinga didn’t like the results. What did he do to express his opposition?
c) Do you agree with either one or both (Odinga’s actions; Kenyatta’s response to the media)? Explain your answer.
d) How should each leader have reacted?

Read more about the crisis in Kenya at NPR