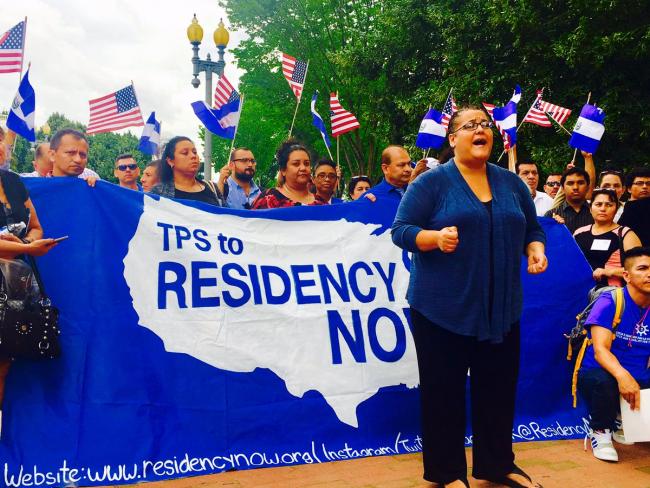 Special Note:
Due to illness, posting may be delayed or sporadic for the next week or so. Please bear with us until we are able to resume our regular posting schedule.

TEMPORARY PROTECTED STATUS: In 1990, as part of the Immigration Act of 1990 signed into law by President George H.W. Bush, Congress established a procedure by which the Attorney General may provide temporary protected status to immigrants in the United States who are temporarily unable to safely return to their home country because of ongoing armed conflict, an environmental disaster, or other extraordinary and temporary conditions. (from wikipedia)

(by Anna Giarrtelli, Washington Examiner) – The Trump administration will rescind temporary protected status for 262,500 people from El Salvador who were granted permission to live and work in the United States after two earthquakes rocked their country, senior administration officials announced Monday morning.

Salvadorans who have been in the country for up to 16 years will now be given 18 months to return to home. Recipients will be permitted to renew their TPS (Temporary Protected) status between now and Sept. 9, 2019.

Secretary of Homeland Security Kirstjen Nielsen consulted with the Salvadoran foreign minister, ambassador to the U.S., and President Sánchez Cerén about the decision, DHS said in a release.

“The conditions on the ground are what we look at, not the economic impact on the United States,” one official told reporters in a call Monday morning.

“[O]fficials in the Trump administration say the only criteria the government should consider is whether the original reason for the designation — in this case, damage from the earthquakes — still exists. The homeland security secretary decided that enough of the damage had been repaired 17 years later, and so the protections should end,” DHS said in a statement.

DHS originally granted TPS to the group of Salvadorans following two earthquakes that devastated the Central American country in 2001. TPS provides temporary lawful status and work authorizations to people who arrived in the U.S. due to armed conflict, natural disaster, or other reasons back in their home countries.

The El Salvador program has repeatedly been renewed under former presidents George W. Bush and Barack Obama. Obama last renewed it in 2016, citing drought, poverty and widespread gang violence as reasons to continue the program.

Over the past two years, approximately 39,000 Salvadorans have been repatriated [returned back to their own country].

A senior administration official had told the Washington Examiner in December to expect actions on TPS programs for El Salvador and Syria in 2018.

DHS announced in December that TPS programs for Nicaraguans would conclude in the coming months, though the Salvadoran program has seen the largest number of TPS recipients. The Trump administration must decide by early June whether to continue temporary protected status for the 57,000 Hondurans who were shielded from deportation after Hurricane Mitch struck Central America in 1998.

In November, the administration announced Hondurans would be given a six-month extension of the Jan. 5, 2018, expiration date as it decides the fate of the program. However, 2,500 Nicaraguan TPS beneficiaries were given 14 months from November to leave the U.S. or apply for a different visa that would allow them to remain in the country.

Similarly, the administration said it would end provisional residency status for 59,000 Haitians who were allowed to work in the U.S. following the 2010 earthquake.

Published at Washington Examiner on January 8, 2018.

1. For EL SALVADOR, give the following information:

2. For EL SALVADOR:
a) list the who, what, where and when of the news item
b) What is TPS?
c) What criteria does the government consider when deciding whether to extend or end temporary protected status for any country’s citizens?
d) Who is the Secretary of Homeland Security? What did the Secretary determine when deciding about the TPS for Salvadorans?
e) Consider the amount of time other groups have been here under the TPS program or others. How much time is enough time following a natural disaster?
f) Instead of granting TPS for reasons such as poverty or gang violence, what could and/or should the U.S. government do to help these countries? Should we give more than the billions of dollars we give to aid programs around the world through our funding of the United Nations and our own US AID program? Or do you think TPS is the best way to help some people from other countries who have problems? Is TPS a good program?

NOTE: In 1990, as part of the Immigration Act of 1990 signed into law by President George H.W. Bush, Congress established a procedure by which the Attorney General may provide temporary protected status to immigrants in the United States who are temporarily unable to safely return to their home country because of ongoing armed conflict, an environmental disaster, or other extraordinary and temporary conditions. (from wikipedia)

The Secretary of Homeland Security may designate a foreign country for TPS due to conditions in the country that temporarily prevent the country’s nationals from returning safely, or in certain circumstances, where the country is unable to handle the return of its nationals adequately.  …

The Secretary may designate a country for TPS due to the following temporary conditions in the country:

During a designated period, individuals who are TPS beneficiaries or who are found preliminarily eligible for TPS upon initial review of their cases (prima facie eligible):

Once granted TPS, an individual also cannot be detained by DHS on the basis of his or her immigration status in the United States.

TPS is a temporary benefit that does not lead to lawful permanent resident status or give any other immigration status. However, registration for TPS does not prevent you from:

… Read more about TPS at the DHS webpage.