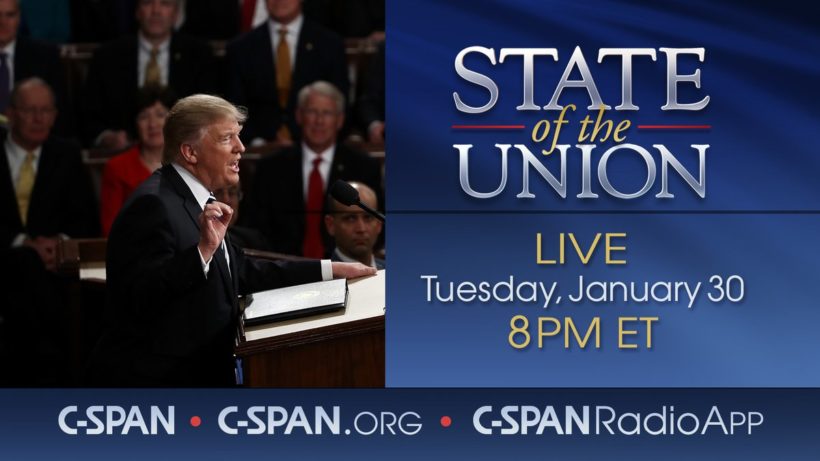 (by Emily Goodin and Alexander Mallin, ABC News) – President Trump will talk about “building a safe, strong and proud America” in his State of the Union address on Tuesday, according to the White House. That will be the theme of his speech, which focus on domestic and national security issues.

Additionally, “the tone will be one of bipartisanship and it will be very forward looking,” according to a senior administration official who briefed reporters at the White House on Friday. President Trump will be “unifying” and speak “from the heart.”

…Mr. Trump will address five major areas in his remarks: jobs and the economy, infrastructure, immigration, trade and national security.

Few details…were offered about these issue areas. The president’s remarks on immigration are expected to reflect the White House plan released on Thursday that will offer a pathway to citizenship for Dreamers, the children brought to this country illegally, in exchange for billions of dollars in and tighter restrictions on legal immigration.

Infrastructure has long been touted as an issue both parties can get behind – and President Trump will offer a trillion dollar proposal on that – but the issue often gets bogged down in other politics. The president will also emphasize “fair and reciprocal trade,” according to the briefing, and talk about rebuilding the military, using a policy “of peace through strength.”

Mr. Trump will also address the opioid crisis affecting the nation. At least one of the guests in the first lady’s box will be reflective of that, while other guests will be people who benefited from the Republicans’ The Tax Cuts and Jobs Act.

Tuesday will be Trump’s first formal time at bat. He gave a speech to Congress on February 27, about a month after he was inaugurated, but that occasion is referred to as an address to a joint session given the short amount of time a president is in office at that point.

In his February address, President Trump pledged to “soon begin the construction of a great, great wall along our southern border.” He also called on Congress to repeal and replace Obamacare. …

Members of Congress, the Cabinet, Chairmen of the Joint Chiefs, members of the Diplomatic Corps and the justices of the Supreme Court attend the State of the Union, which takes place in the U.S. House chamber. Applause from the president’s party and occasional boos from the other party are a normal part of the event, which is televised across all news networks. The members of the court, the military and diplomatic corps traditionally do not clap to show their impartiality. …

Additionally, at least four members of Congress who dislike the President [and have called him a racist and a liar among other things] — Rep. John Lewis, (D-Ga.), Rep. Maxine Waters, (D-Calif.), Rep. Frederica Wilson, (D-Fla.), and Rep. Pramila Jayapal, (D-Wash.), — said they will not attend the speech…

Including Trump’s 2017 address, there have been a total of 95 in-person Annual Messages/State of the Union Addresses made to Congress, according to the U.S. House Historian’s office. Additionally, the first radio broadcast was President Calvin Coolidge in 1923. Harry Truman in 1947 had the first television broadcast and George W. Bush in 2002 had the first webcast on the Internet.

One Cabinet member skips the speech in order to ensure the continuity of government in case of a disaster. That person is usually announced the day of the address. …

Reprinted here for educational purposes only. May not be reproduced on other websites without permission from ABC News.

3. What will be the tone of the President’s address, according to White House officials?

4. List the 5 major areas President Trump will cover in his address.

5. a) What policy will President Trump pursue as he details rebuilding the military?
b) Peace through strength is “a philosophy that guided the U.S. to victory in the Cold War.” From wikipedia: “Peace through strength” is a phrase which suggests that military power can help preserve peace. It is quite old and has famously been used by many leaders from Roman Emperor Hadrian in the first century AD to conservative President Ronald Reagan in the 1980s. Ask a parent or grandparent, “Do you support a U.S. policy of “peace through strength”? Please explain your answer.

6. President Trump’s address will focus on domestic and national security issues. Which of the following do you think are most important for President Trump to include in his State of the Union address? Explain your answer.

1.  Tone is the attitude a speaker takes towards a subject. What was the tone of President Trump’s 2018 State of the Union address?

3.  a) What general statement did President Trump make about the economy in his address to the nation?
b) What is your reaction to this encouraging statement?
c) Ask a parent the same question.

10. Watch/read the Democratic response to the President’s State of the Union on live TV following the President’s SOTU or at c-span.org. The response speech is shorter and often given as a rebuttal to the opposition party’s ideas and plans. This practice began once television became a major part of politics. According to the Senate’s website, the first opposition party response to a State of the Union speech was in 1966 when then-Senate Majority Leader Everett Dirksen (R-Illinois) and House Minority Leader Gerald Ford (R-Michigan) gave a response to President Lyndon Johnson’s State of the Union address. What do you think of Massachusetts Rep. Joe Kennedy III’s response?