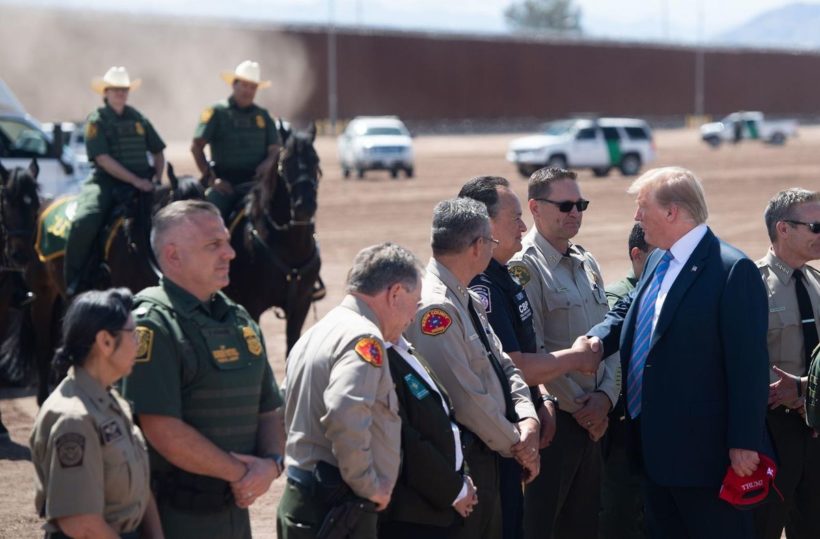 (NBC7 Dallas-Fort Worth) — President Donald Trump visited the U.S.-Mexico border in Calexico, California, Friday and touted the effectiveness of a newly replaced stretch of border wall, calling it “better, faster and less expensive,” than the portion of fence it replaced.

The president flew into Naval Air Facility El Centro aboard Air Force One and was greeted to cheers from border patrol agents, military troops and their families before boarding a motorcade en route to the border town. On the road to Calexico, supporters stood cheering, waving flags and holding signs thanking Trump and supporting the wall.

At the Calexico station, the president was joined for a quick media briefing by law enforcement agency officials from border jurisdictions from San Diego to Arizona.

El Centro Sector CBP Chief Gloria Chavez said, “We’re very appreciative of this wall. These men and women out here in the area of two miles were experiencing a high number of assaults and use-of-force incidents. This was prior to this wall being built.”

Chavez said the see-through design of the new barrier gives agents a huge advantage because they can now see what’s on the other side.

Chavez said agents would have rocks and other items thrown at them on a daily basis, but those threats have stopped since the new barrier was erected. According to Chavez, assaults on agents have dropped 65 percent in that two-mile stretch and illegal entries have decreased by 75 percent.

The president said the majority of breaches in the area happen at points along the border still lined with the old fence. When the entire area is lined with the new style fence, he predicted illegal entries in Chavez’s area would be down 99.9 percent.

Three sheriffs from counties in California’s central valley were also at the briefing, saying they feel the impact of porous border defense from 400 miles away.

“I just want to take this opportunity to thank this president for doing the right thing and standing up for law enforcement in this country. It is greatly appreciated,” Kern County Sheriff Donny Youngblood said.

Sherrif representatives from Arizona who joined the president also thanked him for his commitment to border security, and said they neutralize threats from the other side of the southern border every day.

“Anyone who would suggest that we do not have a crisis on our southern border is being intellectually dishonest to the point of being dishonest with malice. We have a humanitarian crisis which is very clear and compelling, we have a compelling crisis of public safety with human trafficking, drug trafficking, sex trafficking coming through the border. This is not make believe, this is something that we live with every day as border sheriffs, so we applaud the efforts of the current administration to secure our border,” Pima County Sheriff Mark D. Napier said.

Ahead of the tour, the president first sat down for a roundtable with U.S. Customs and Border Patrol and Department of Homeland Security officials. Border Patrol Chief Chavez said that the renovated section of wall – which is now 30-foot steel fencing – accounted for a drop in illegal entries by 75 percent in fiscal year ’19 (including both Central American and Indain nationals apprehended along that segment).

“We need the border barrier, we need to provide the requirements that meet our need, in this case for us its 30 feet high,” Chavez said. “That’s what we asked for and that’s what was provided, so thank you on behalf of the border patrol here for allowing that to happen.”

With the renovation, the section became the tallest border barrier along the southern United States, standing at 30 feet tall, according to Chavez.

The White House says it’s the first section of his proposed border wall to be built….

“There is indeed an emergency on our southern border,” Trump said at the briefing, adding that there has been a sharp uptick in illegal crossings. “It’s a colossal surge, and it’s overwhelming our immigration system. We can’t take you anymore. Our country is full.”

Published at nbcdfw .com on April 5. Reprinted here for educational purposes only. May not be reproduced on other websites without permission from NBC7 Dallas Fort-Worth.

2. Watch the videos under “Resources” below.  Why do you think it is important for people to have seen these meetings? Explain your answer.  (NOTE: below the videos is a link to the 52 minute roundtable with President Trump and border patrol officials and agents. You may watch this as well if you want to really understand what’s going on).

3. Overall, what do the men and women who met with the President say about a border wall/fence?

4. During the roundtable, the several Border Patrol and law enforcement agents spoke. Watch the clip of Gloria Chavez, U.S. Border Patrol, El Centro (California) Sector Chief. What did she say about the following?
a) How many fake families (people who aren’t related but pretending to be a family) have they identified so far in FY19 (fiscal year 2019)?
b) What does she say about the 58 miles of border barrier in her sector?
c) What does she say about each:
-stats for numbers overall
-numbers coming from Central America
-numbers of Indian nationals coming across the border in her sector
-use of force incidents

5. News outlets publish numerous stories on family separations at the border and the hardships faced by people traveling from Central America to enter the U.S. illegally, or those who are claiming asylum. President Trump has pointed out that many people claiming asylum are not eligible, but rather use that loophole to gain access to the U.S.
First, do a search for news reports on Mr. Trump replacing Department of Homeland Security (DHS) Secretary Kirstjen Nielsen on Sunday. How many major media outlets had one (or more reports) on this story?
Then, do a search for news reports from major media (CNN, ABC, NBC, CBS, NYTimes, Washington Post…) on the President’s trip to the border Friday, including reports on what Border Patrol and sheriffs were saying. If you find any, what slant do they take (positive, negative or balanced?) Why do you think the media is not giving their audience (viewers and readers of the news) balanced reports on this national emergency, including interviewing border patrol agents and officials?

To date, the U.S. Army Corps of Engineers has updated about 82 miles of barriers throughout the Southwest border, said 54th Chief of Engineers and Commanding General Lt. Gen. Todd Semonite.

By the end of this year about 97 miles of border fencing is expected to have been updated, with an additional 277 miles of upgrades expected in 2020 as well, Semonite said.

Calexico Police Department Chief Gonzalo Gerardo said he has seen firsthand how the barrier has improved public safety in the border city since it was initially installed in the 1990s.

Watch the entire April 5 roundtable with President Trump and members of Border Patrol and law enforcement who have been working at the border for years: c-span.