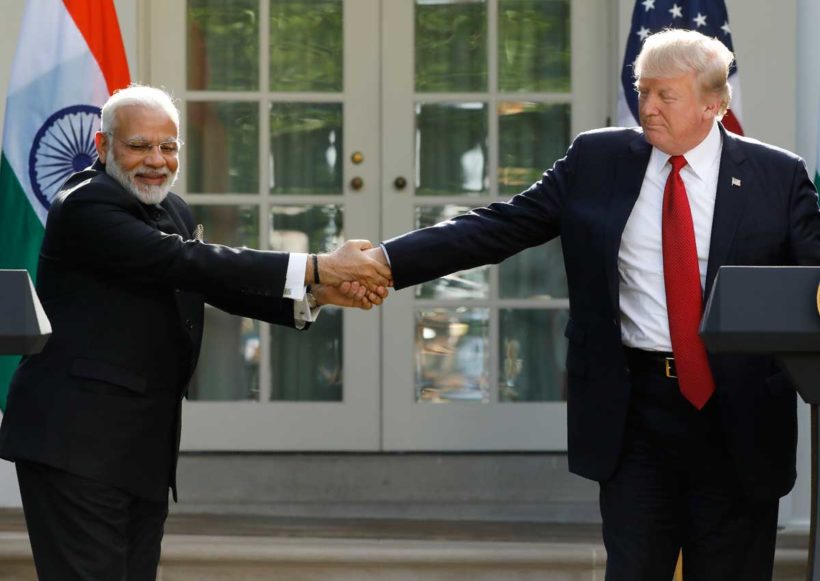 NOTE: A tariff is a tax on imports, often known as a duty or a trade barrier. The purpose of a tariff is to protect domestic production and jobs.

(by Darryl Coote, UPI) — The Trump administration has said it will terminate its preferential trade status to India and Turkey as the White House [works to fulfill the President’s promise to fix] imbalanced trade relations.

On Monday, the Office of the U.S. Trade Representative issued a statement that said India’s and Turkey’s designations as beneficiary developing countries under the Generalized System of Preferences (GSP) program would be canceled due to non-compliance. …

Specifically, it said India had implemented trade barriers that have negatively impacted the United States, and it has not taken measures to fix it.

“I am taking this step because, after intensive engagement between the United States and the government of India, I have determined that India has not assured the United States that it will provide equitable and reasonable access to the markets of India,” Trump wrote to congressional leaders.

Turkey’s designation was terminated [because it is] “economically developed and should no longer benefit from preferential market access.”

Turkey was given the designation by the United States in 1975 and since then, its gross national income per capita, declining poverty rates and export diversification show that it no longer warrants preferential treatment, it said. … President of Turkey Recep Tayyip Erdogan (L) with President Trump during a meeting in Washington D.C. on May 16, 2017. (Photo: Olivier Douliery/AFP/Getty Images)

The statement says the designation terminations were at the behest of President Trump, who is currently [negotiating a trade deal] with China.

The president has long said that the United States has been on the wrong side of trade deficits and his administration made it a major goal to fix that.

Most recently, Mr. Trump called off a scheduled tariff increase on China due to trade talks progressing. He said if a trade deal is completed, he’d invite Chinese President Xi Jinping to his Florida Mar-a-Lago resort to sign it.

The designation removal will not take effect for 60 days after notifications are sent to Congress as well as to the governments of Turkey and India. It will then be enacted by a Presidential Proclamation, the statement said.

Published at UPI .com on March 5. Reprinted here for educational purposes only. May not be reproduced on other websites without permission from United Press International.

2. What is the preferential trade status India and Turkey have been receiving?

4. Why is President Trump renegotiating trade deals and/or ending special trade privileges with our trading partners around the world?

5. Watch the video clips under “Resources” below as President Trump briefly explains his position. Ask a parent: what do you think of the tariff issue with India and other countries? Please explain your answer.

From a March 4 Reuters article:

What is the Generalized System of Preferences (GSP)?

U.S. trade preference programs such as the Generalized System of Preferences (GSP) provide opportunities for many of the world’s poorest countries to use trade to grow their economies and climb out of poverty. GSP is the largest and oldest U.S. trade preference program. Established by the Trade Act of 1974, GSP promotes economic development by eliminating duties (tax charged by a government, especially on imports) on thousands of products when imported from one of 120 designated beneficiary countries and territories. The GSP Guidebook provides basic information on the program. (from ustr.gov)

India
The United States launched an eligibility review of India’s compliance with the GSP market access criterion in April 2018. India has implemented a wide array of trade barriers that create serious negative effects on United States commerce. Despite intensive engagement, India has failed to take the necessary steps to meet the GSP criterion.

Turkey
The United States designated Turkey as a GSP beneficiary developing country in 1975. An increase in Gross National Income (GNI) per capita, declining poverty rates, and export diversification, by trading partner and by sector, are evidence of Turkey’s higher level of economic development.