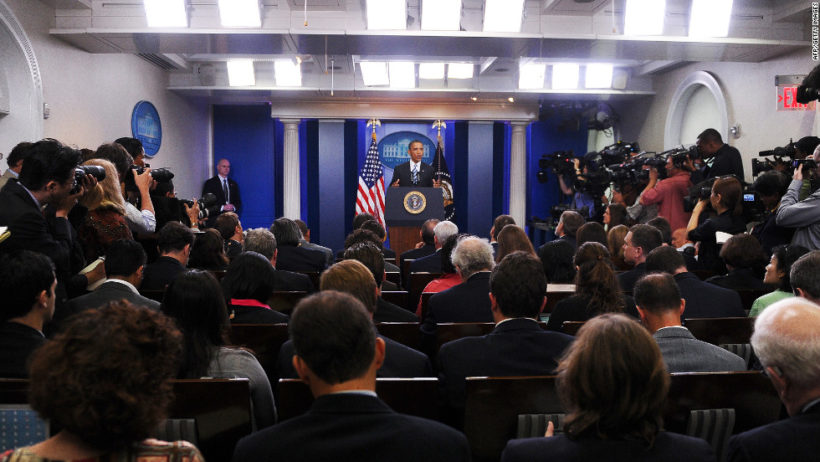 President Barack Obama holds a news conference in the James S. Brady Press Briefing Room at the White House. Built in 1970 during the Nixon administration, the briefing room replaced a swimming pool that was installed for President Franklin D. Roosevelt in 1934. (CNN)

“This is about greater accessibility, more people in the process,” Sean Spicer said Sunday on Fox News Channel’s “Media Buzz.” Involving more people, including bloggers and others who aren’t from the mainstream media, “should be seen as a welcome change,” he said.

Spicer and other Trump officials said no decisions had been made.

Their comments followed a report Saturday by Esquire, citing unidentified officials from the transition team, that the new administration may move the press corps out of the main White House building altogether because of antagonism between Trump and the media.

Any change would be made for logistical reasons, in response to heavy demand from media organizations, Vice President-elect Mike Pence said Sunday.

“The briefing room is open now to all reporters who request access,” White House Correspondents’ Association President Jeff Mason said in a statement Sunday. “We object strenuously to any move that would shield the president and his advisers from the scrutiny of an on-site White House press corps.”

Mason said he was meeting with Spicer “to try to get more clarity on exactly what” the proposal is.

“There’s such a tremendous amount of interest in this incoming administration that they’re giving some consideration to finding a larger venue on the 18 acres in the White House complex, to accommodate that extraordinary interest,” Pence said on CBS News’ “Face the Nation.”

“The interest of the team is to make sure that we accommodate the broadest number of people who are interested and media from around the country and around the world,” Pence said.

On ABC’s “This Week,” incoming White House chief of staff Reince Priebus said demand for press-conference credentials far exceeds the “49 people” who can fit into the current briefing room.

“The one thing that we discussed was whether or not we want to move the initial press conferences into the Executive Office Building,” Priebus said, adding, “you can fit four times the amount of people.”

“I know that some of the folks in the press are uptight about this, and I understand,” Priebus said. He didn’t address whether a change was being mulled only for briefings or also for the media’s daily working arrangements. The briefing room sits between the offices of White House communications staff and those of major news organizations, and is steps from the president’s Oval Office.

After “500 or 600” people attended Trump’s press conference in New York on Jan. 11, the president-elect’s first since the election, “we started thinking, man alive, if we have more people involved instead of less people involved, wouldn’t that be a good thing,” Priebus said.

Although located across the street [see map under “Resources” below], the Executive Office Building is still “the White House,” he said.

NOTE: Today’s article was originally published on January 15th. In an interview on January 18th, President-elect Trump said they will not move the Press Briefing Room. Watch the interview under “Resources” below.

Reprinted here for educational purposes only. May not be reproduced on other websites without permission from Bloomberg News.

NOTE:  Before answering the questions, read the “Background” and view maps of West Wing and White House/Executive office under “Resources” below.

2. What is the White House Press Corps?

4. a) How many reporters can fit into the current press briefing room? What did incoming White House Chief of Staff Reince Priebus say about a possible change in press briefings location? Be specific.
b) How did he address the Press Corps’ concern over the possible move?

5. What did Vice President-elect Mike Pence say about the possible move? Be specific.

7. White House Correspondents’ Association President Jeff Mason responded to the news in a statement Sunday: “The briefing room is open now to all reporters who request access. We object strenuously to any move that would shield the president and his advisers from the scrutiny of an on-site White House press corps.”
a) What do you think: would this move open up press briefings to more reporters and be a good thing for transparency, or would it shield the president from scrutiny?
b) Whatever political party you support, which do you think is a better way to provide transparency for the American people?

The White House press corps is the group of journalists or correspondents usually stationed at the White House to cover the President, White House events, and news briefings. Their offices are located in the West Wing.

NOTE: Today’s article was published on January 15th. In an interview on January 18th, President-elect Trump said they would not be moving the Press Briefing Room. Watch the January 18th interview below: