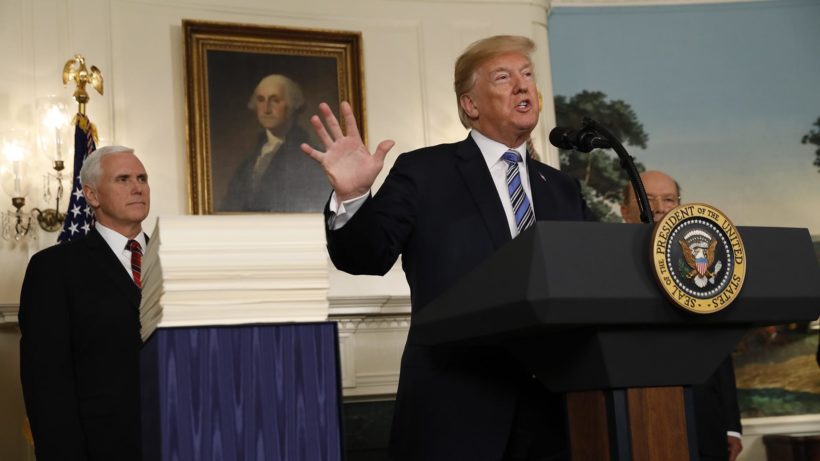 President Trump stands next to Congress’ $1.3 trillion spending bill during a ceremony in the Diplomatic Room of the White House in Washington. (NY Post)

(Compiled from Sara Boboltz, Huffington Post and Susan McFarland and Danielle Haynes, UPI) – President Donald Trump said Friday that he had signed the 2,232-page, $1.3 trillion spending bill that the House and Senate approved this week, [which] fund the government through September.

The announcement came hours after the president threatened to veto the bill because it did not provide enough funding for his border wall or a solution for immigrants brought to the country as children under the Deferred Action for Childhood Arrivals, or DACA, program.

Trump called the bill a “ridiculous situation” while speaking at a White House press conference, pointing to a large stack of papers that represented the package. But he said he had decided against a veto because the bill [increases military spending, which is imperitive, including a pay raise for troops. It was also reported later that Secretary of Defense James Mattis strongly urged the president not to do so as it could “flatline defense.”]

“So while we’re very disappointed in the 1.3 trillion, there’s nobody more disappointed than me because the number is so large…. We had no choice but to fund our military because we have to have by far the strongest military in the world. And this will be by far the strongest military that we’ve ever had. So when you look all of these pages, a lot of that is devoted — a lot — to the military.

“Our military will be far superior than to any military anywhere in the world. That’s very import for us. You see the players out there, you see what we’re dealing with [North Korea, Iran, China, Russia, other rogue regimes, various terrorists…].

The bill provides $1.6 billion for border security measures including secondary fencing, levee fencing, pedestrian fencing and replacement fencing. Yet that amount falls far short of the $25 billion the White House had requested to construct a full wall along the border between the U.S. and Mexico.

The package also provides a 2.4 percent pay raise for the military and a 1.9 percent increase for civilian government employees. It allocates $144 billion for Pentagon spending, along with increases for both U.S. Customs and Border Protection and U.S. Immigration and Customs Enforcement.

Along with money to boost the military, the package includes $2.8 billion to fight the opioid epidemic and pay for more than $21 billion in infrastructure projects. The bill also includes about $700 million for election security, giving more money to the FBI to better conduct counter-intelligence to fight Russian cyberattacks. It also includes an effort to strengthen the background check process for gun purchases.

The president called on Congress to end the practice of delaying votes with filibusters [so the Senate could pass a budget with a simple majority] and to [give him line-item veto power on the budget, which would] grant him the power to reject individual provisions of government spending bills so he could prevent future budget problems.

According to Trump, only President Barack Obama has signed a larger spending bill.  “And I’m sure he wasn’t too happy about it, either,” Trump said.

Toward the end of his speech he addressed the DACA recipients:

“I say this to DACA recipients:  the Republicans are with you, they want to get your situation taken care of. The Democrats just fought every single inch of the way. They did not want DACA in this bill. And as you know, DACA is also tied to the wall for the major funding, the $25 billion for the wall and other things. So I think that will be coming up very soon. But I do want the hispanic community to know and DACA recipients to know that Republicans are much more on your side than the Democrats who are using you for their own purposes.”

The spending bill passed the House 256-167 on Thursday, and passed the Senate 65-32 early Friday.

Sen. Rand Paul, R-Ky., tweeted throughout the evening and at one point called it a night: “I shared 600 pages tonight. I’m done tweeting them for the evening. If they insist on voting, I will vote no because it spends to much and there’s just too little time to read the bill and let everyone know what’s actually in it.” Sen. Rand Paul holds the spending bill: $1.3 Trillion, 2,232 Pages, One Messy Process.
On March 22, Sen. Paul tweeted “Well here it is, all 2,232 budget-busting pages. The House already started votes on it. The Senate is expected to soon. No one has read it. Congress is broken…”

1. Why did President Trump threaten to veto the bill before signing it?

2. Why did the president decide not to veto it but instead sign the bill? Be specific.

3. This spending bill will be in effect until September. What warning did President Trump give Congress about future spending bills?

4. What two things did President Trump call on Congress to do going forward to be used with future spending bills?

5. Republicans control the House and the Senate. Why do you think they capitulated so easily to the demands of the Democrats, who are very happy that they got much of what they wanted in the spending bill?

7. Read the “Background” below. President Trump decided not to veto the bill over the concern that in a new spending bill the Pentagon would not get the money needed for re-building the military (in this bill Congress allocated more than the president even asked for).
a) Considering the threats posed by Iran, North Korea, China, Russia, rogue regimes and terrorists, do you think the President made the right choice? Explain your answer.
b) Building the wall (and receiving the funding to do so from Congress) is a number one priority for President Trump (and his voters). Was making the concession to fund the military the right thing to do? Explain your answer.

8. Before the president signed the bill, conservative talk show host Rush Limbaugh said, “Stop thinking of Congress as Republicans and Democrats. You’ve got to think of that as one unified group of people, establishmentarians who are working in a coordinated way to thwart and nullify the election and agenda of the Trump presidency.”
In an attempt to get around Congress (where many Republicans appear to be unified with Democrats against President Trump) the president suggested in a tweet on Sunday that he could build the wall using the military as it is a matter of national security and the military now has the funds to do so. What is your reaction to this?

More from President Trump’s speech on the bill:

So we have many elements in the bill that we wanted. Just to look at a few of them, we’re providing $654.6 billion in total discretionary funding for defense. It’s a record. …

We’re spending a lot of money on nuclear, our nuclear systems, to upgrade, and in some cases, brand new, whether it’s submarines, nuclear submarines and others. So we’ll have by far the most powerful nuclear force on Earth. …

Some of the many things that we’re buying in the military:

We’re spending tremendous money on missile defense. You understand what that means? Everybody does. With what we have out there [threats from Iran, North Korea, China, Russia, rogue regimes and terrorists], missile defense is very, very important.