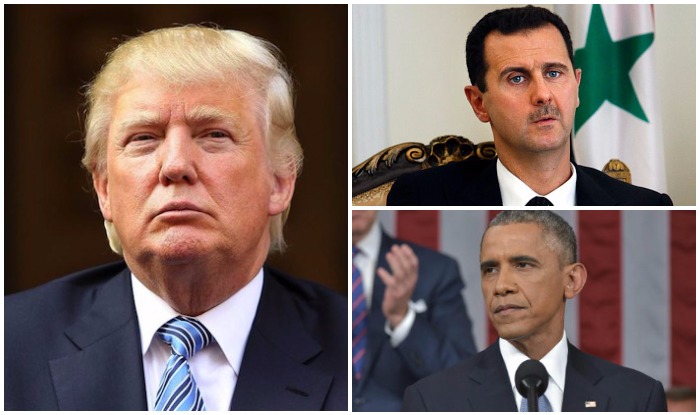 President Trump has said Syrian President Bashar al-Assad (top right) has gone "beyond a red line" with a poison gas attack on civilians. He said the attack "crosses many, many lines," an allusion to his predecessor Barack Obama's threat to topple Assad with air strikes if he used such weapons, which he did not carry through on.

(by Jeff Mason and Tom Perry, Reuters)  WASHINGTON/BEIRUT — U.S. President Donald Trump accused Syrian President Bashar al-Assad’s government of going “beyond a red line” with a poison gas attack on civilians and said his attitude toward Syria and Assad had changed, but gave no indication of how he would respond.

President Trump said the attack, which killed at least 70 people, many of them children, “crosses many, many lines,” an allusion to his predecessor Barack Obama’s threat to topple Assad with air strikes if he used such weapons. (Assad continued to use chemical weapons; President Obama failed to follow through on his threat.)  Mr. Trump’s accusations against Assad put him directly at odds with Moscow, the Syrian president’s principal backer.

“I will tell you, what happened yesterday is unacceptable to me,” President Trump told reporters at a news conference with Jordan’s King Abdullah on Wednesday.

“And I will tell you, it’s already happened that my attitude toward Syria and Assad has changed very much,” though when asked at an earlier meeting whether he was formulating a new policy on Syria, Mr. Trump said: “You’ll see.”

Vice President Mike Pence, when asked whether it was time to renew the call for Assad to be ousted and safe zones be established, told Fox News: “But let me be clear, all options are on the table,” without elaborating.

U.S. officials rejected Russia’s assertion that Syrian rebels were to blame for the attack.

President Trump’s comments, which came just a few days after Washington said it was no longer focused on making Assad leave power, suggested a clash between the Kremlin and Mr. Trump’s White House after initial signals of warmer ties. President Trump did not mention Russia in his comments on Wednesday but Secretary of State Rex Tillerson said it was time for Russia to think carefully about its support for Assad.

Vice President Pence said the time had come for Moscow to “keep the word that they made to see to the elimination of chemical weapons so that they no longer threaten the people in that country.”

Western countries, including the United States, blamed Assad’s armed forces for the worst chemical attack in Syria for more than four years.

U.S. intelligence officials, based on a preliminary assessment, said the deaths were most likely caused by sarin nerve gas dropped by Syrian aircraft on the town of Khan Sheikhoun on Tuesday. A senior State Department official said Washington had not yet ascertained it was sarin. Moscow offered an alternative explanation that would shield Assad: that the poison gas belonged to rebels and had leaked from an insurgent weapons depot hit by Syrian bombs.

A senior White House official, speaking on condition of anonymity, said the Russian explanation was not credible. “We don’t believe it,” the official said.

Following the attack, the United States, Britain and France have proposed a draft U.N. Security Council resolution that would condemn the attack; the Russian Foreign Ministry called it “unacceptable” and said it was based on “fake information.” Moscow has proposed its own draft.

The U.S. Ambassador to the United Nations, Nikki Haley, issued what appeared to be a threat of unilateral action if Security Council members could not agree.

“When the United Nations consistently fails in its duty to act collectively, there are times in the life of states that we are compelled to take our own action,” she told the council, without elaborating.

President Trump described the attack as “horrible” and “unspeakable.” He faulted President Obama for failing to carry through on his “red line” threat and when asked if he had responsibility to respond to the attack, said: “I now have responsibility.”

Video uploaded to social media showed civilians sprawled on the ground, some in convulsions, others lifeless. Rescue workers hose down the limp bodies of small children, trying to wash away chemicals. People wail and pound on the chests of victims.

The incident is the first time U.S. intelligence officials have accused Assad of using sarin since 2013, when hundreds of people died in an attack on a Damascus suburb. At that time, Washington said Assad had crossed a “red line” set by then-President Obama.

President Obama threatened an air campaign to topple Assad but called it off at the last minute when the Syrian leader agreed to give up his chemical arsenal under a deal brokered by Moscow, a decision which Mr. Trump has long said proved Mr. Obama’s weakness. (It is obvious now that Assad did not eliminate his chemical weapons stockpile.)

Excerpted from Reuters .com. Reprinted here for educational purposes only. May not be reproduced on other websites without permission from Thomson Reuters.

1. How many people are known to have been killed by a chemical weapons (poison gas) attack on Syrian civilians this week?

3. What did President Trump’s Vice President, Mike Pence, say about the attack and Russia?

4. What did President Trump’s Secretary of State, Rex Tillerson, say about Russia’s support for Assad?

5. What did President Trump’s Ambassador to the UN, Nikki Haley, say about the attack and UN response?

6. The Reuters reporters point out in paragraphs 1, 5 and 16 that President Trump “gave no indication of how he would respond” and Vice President Pence and Ambassador Haley commented “without elaborating.”
Watch President Trump’s comments in the video under “Resources” below.
a) Do you think this is a wise, strategic policy or should all details of the Trump administration’s plan be publicized in advance of any possible action? Explain your answer.
b) Ask a parent the same question. Discuss your answers.

President Obama on Bashar Assad’s use of chemical weapons:

On August 20, 2012, President Obama stated that the use of chemical weapons by Syria’s President Asad would be a “red line for us.” He was specifically answering a question whether he would ever “envision using U.S. military” force in Syria.

Obama’s “red line” wasn’t an offhand remark. The president repeated the line several times and his staff used in official communications with the U.S. Congress:

Because of our concern about the deteriorating situation in Syria, the president has made it clear that the use of chemical weapons — or transfer of chemical weapons to terrorist groups — is a red line for the United States of America. The Obama administration has communicated that message publicly and privately to governments around the world, including the Assad regime.

Obama’s “red line” made headlines around the globe. Every one believed that if Syria’ s dictator Bashir al-Assad used chemical weapons, Obama would order military strikes. [After the President’s remarks, Assad] started with a small, deniable use of chemical weapons. The president’s [aides] quickly said the evidence was inconclusive, speculative and even dangerous. So progressively larger chemical weapons attacks followed—until U.N. inspectors and other international observers found the evidence to be so overwhelming that it couldn’t be denied any longer.

The President….denied drawing any red line and claimed it was the responsibility of Congress or the international community to do something. His hands were tied, he said, he couldn’t act alone. (from forbes.com)

Note:  Prior to September 2013 the Syrian government had not publicly admitted to possessing chemical weapons, although Western intelligence services believed it to hold one of the world’s largest stockpiles. (Read more at Wikipedia post “Use of chemical weapons in the Syrian civil war”)

Watch President Trump’s remarks on how he will respond to the Syrian government’s chemical attack: