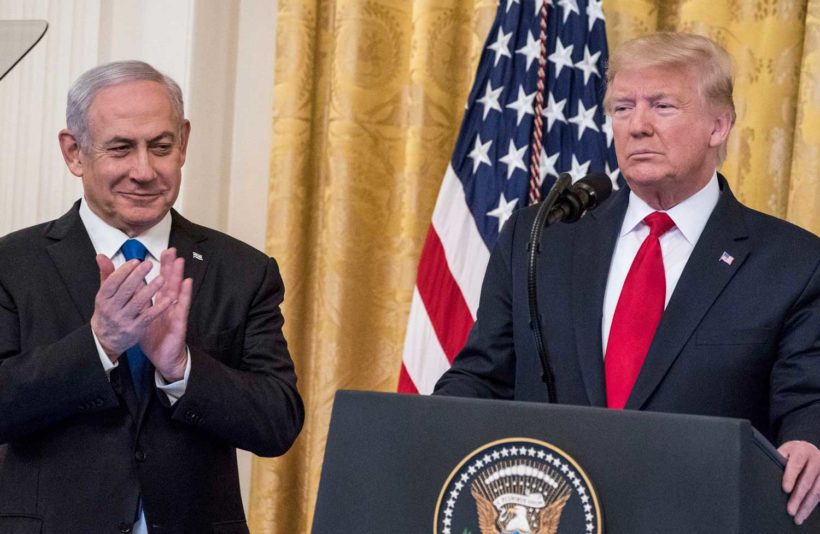 (by Shannon Pettypiece, NBC News) WASHINGTON — President Donald Trump on Tuesday released a long-promised Middle East peace plan that, if implemented, would create a conditional path to statehood for Palestinians while recognizing Israeli sovereignty over a significant portion of the West Bank.

The president briefly outlined elements of the proposal, which included a future Palestinian state with its capital in east Jerusalem, at a White House event with Israeli Prime Minister Benjamin Netanyahu at his side. Trump said the long-shot plan, which lacks Palestinian support, would require both sides to make concessions.

“Our proposal provides precise technical solutions to make Israelis, Palestinians and the region safer and much more prosperous,” Trump said. “As I have seen throughout my long career as a deal-maker, complex problems require nuanced, fact-based remedies.”

The White House later said that Israel had agreed to a four-year “land freeze” for areas the plan would designate as part of a possible Palestinian state — though it appeared that would not apply to settlements in areas that could remain under permanent Israeli control under the proposal, which one official said could include as much as 30 percent of the West Bank.

U.S. ambassador to Israel David Friedman added that preconditions for Palestinian statehood would include “a complete dismantling of Hamas, Islamic Jihad, other terrorist groups” and the development of a system of government that meets international standards for human rights, freedom of religion, rule of law and the fight against corruption.

Trump has called the proposal, whose development was spearheaded by son-in-law and White House senior adviser Jared Kushner, “the deal of the century,” touting the prospect of brokering an agreement between the Israelis and the Palestinian as one of his top priorities since the first day of his administration — even as most observers have said the plan is effectively dead on arrival.

Palestinians, who publicly criticized the plan, have not been involved in the process, refusing to meet with Trump administration officials since the president’s December 2017 announcement that the U.S. would recognize Jerusalem as Israel’s capital.

Jordanian officials also expressed reservations about major elements of the proposal, and officials from that country, along with Egypt — the only two Arab nations that have peace treaties with Israel — were not present at the White House event.

Still, several Persian Gulf countries sent ambassadors to Tuesday’s White House event, including the United Arab Emirates, Oman and Bahrain, in an early sign that the plan may get some cautious support from a few states.

Shortly after Trump’s remarks, the U.S. embassy in Jerusalem issued a security alert warning U.S. government employees and their families not to travel to certain parts of the country due to “widespread calls [by Palestinian leaders] for demonstrations in Jerusalem, the West Bank and Gaza” in reaction to the plan.

The details released by the White House raised questions about how much sovereignty a Palestinian state would have under the plan. The proposal envisions it as being surrounded by Israeli territory and not sharing a border with a neighboring Arab country, since Israel would get control of the Jordan Valley, the region that lies on the eastern portion of the West Bank bordering Jordan.

Similar uncertainty surrounded the final status of Jerusalem: While Trump said Tuesday the city would remain united, the plan also calls for Palestinians to have a capital in the eastern part of the city. 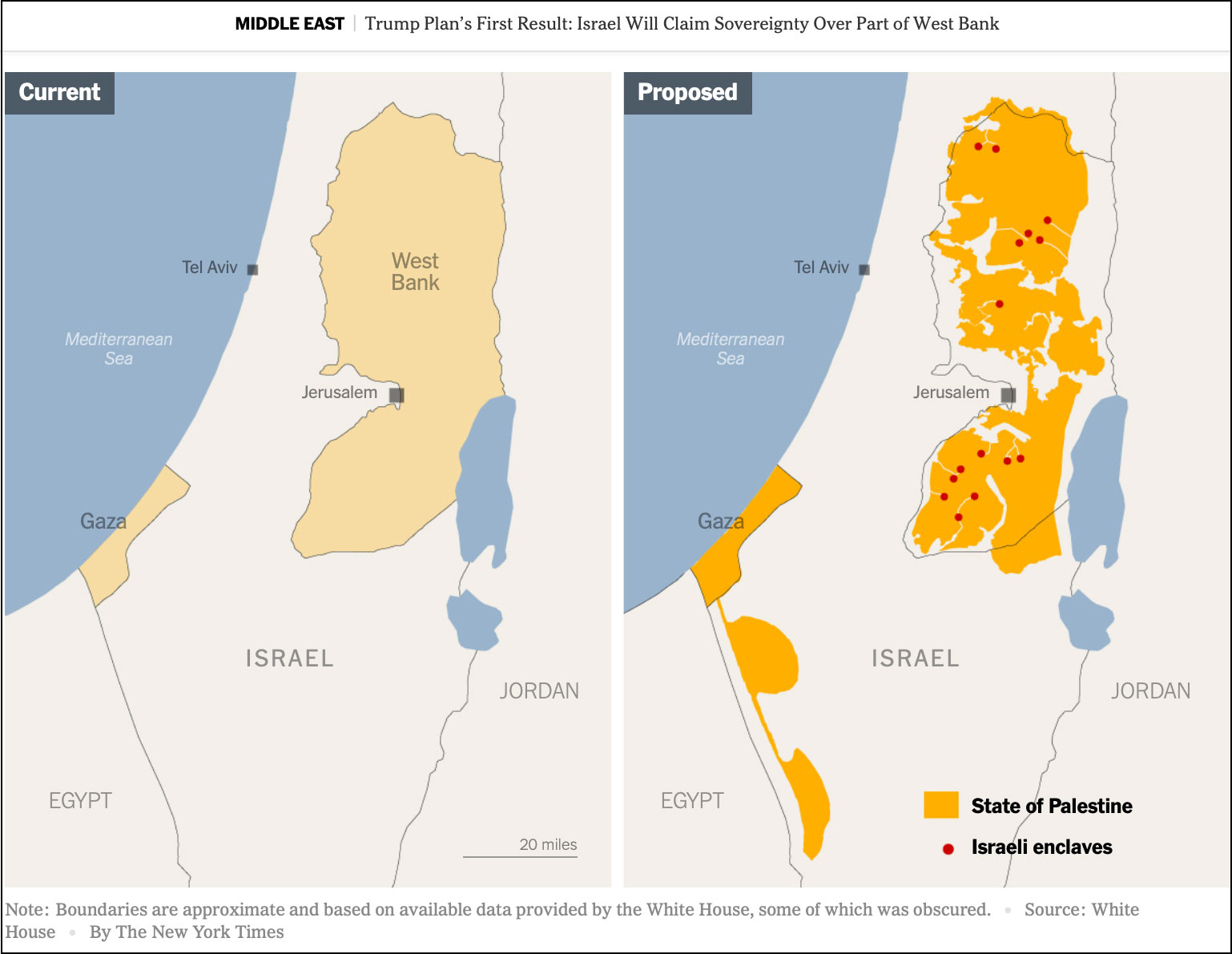 The White House emphasized that the Palestinians have four years to decide whether they want to agree to the terms of the deal — the length of time for the land freeze by Israel.

“We’re hoping to capture the imagination of the Palestinian people,” Friedman said. “We think we’re offering them a lot. It’s a significant expansion of their footprint and statehood and financing.”

…Trump said on Monday, ahead of the plan’s release, that the deal was “overly good” for the Palestinians. He added that he anticipated that the Palestinians would reject the plan, while predicting they would ultimately embrace it.

“We think we will ultimately have the support of the Palestinians,” Trump said Monday. “But we’re going to see. And if we do, it’ll be a tremendous tribute to everybody. And if we don’t, life goes on.”

…In June, the White House, without much fanfare, released the economic portion of the peace plan that promised tens of billions of dollars for the Palestinian economy if a political solution was reached. The Palestinians and their backers in the Arab world rejected it as unworkable.

2. What did President Trump say about the benefit of his proposed peace plan for the region?

3. a) Define preconditions.
b) Palestinian statehood is included in the plan. What preconditions are included, according to U.S. ambassador to Israel David Friedman?

4. How do “most observers” regard the Trump administration’s Middle-east peace plan, according to the NBC reporter?

5. Describe the Palestinian reaction to the plan, as detailed in the article.

6. Jordan and Egypt, the only two Arab countries that have peace treaties with Israel, did not attend the roll-out of the peace plan. Which countries did send ambassadors to the event? Ask a parent or a grandparent: Why do you think the two didn’t attend, while three others did?

7. Re-read paragraph #11: “The details released by the White House raised questions about how much sovereignty a Palestinian state would have under the plan. The proposal envisions it as being surrounded by Israeli territory and not sharing a border with a neighboring Arab country, since Israel would get control of the Jordan Valley, the region that lies on the eastern portion of the West Bank bordering Jordan.”
Why do you think Israel needs to control the borders? (Ask a parent if you are not sure.)

8. Prior to the plan’s release on Monday, what did President Trump say about it?

The proposal calls for a two-state solution, turns over chunks of the West Bank to the Palestinians and makes a conditional offer to place the Palestine capital in a part of East Jerusalem. Trump and Netanyahu said the plan is a “realistic” path to peace, but they didn’t include Palestinian leaders in drawing up the framework of the proposal.

“We say a thousand times: No, no and no to the ‘deal of the century,'” Abbas said, vowing that the U.S. plan “will not come to pass” and that “our people will send it to the dustbins of history.”

In return for accepting the proposal and renouncing the “terrorism” of the Palestinian militant organization Hamas, Trump and Netanyahu have offered $50 billion in aid.

Abbas, however, said the offer amounts to a bribe, asserting that “Jerusalem is not for sale” and that the Palestinian people’s “rights are not for sale or bartering.”

“Will we accept a state without Jerusalem? It is impossible for any Palestinian, Arab, Muslim or Christian child to accept that,” he said.

Turkish President Recep Tayyip Erdogan said any deal in which the Palestinians are denied a say over Jerusalem was “unacceptable.”

“Jerusalem is sacred for Muslims,” he said. “The plan to give Jerusalem to Israel is absolutely unacceptable. This plan ignores Palestinians’ rights and is aimed at legitimizing Israel’s occupation.”

a) Based on these reactions, do you think it is possible to ever have peace between Israel and the Palestinians? Explain your answer.

b) What do you think of the Trump administration’s attempt to negotiate a peace deal?

Read the Trump administration’s proposed plan: “Peace to Prosperity: A Vision to Improve the Lives of the Palestinian and Israeli People at whitehouse.gov/peacetoprosperity.