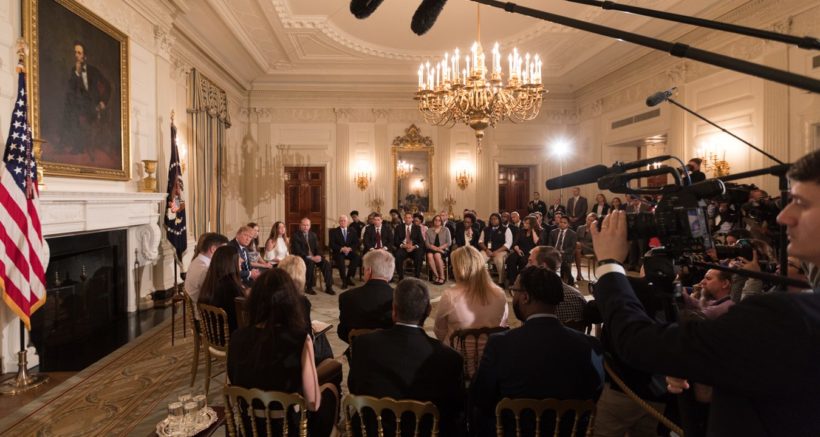 During the meeting, which was expected to lay groundwork for future change, President Trump took suggestions from survivors of the shooting at Marjory Stoneman Douglas High School in Parkland that killed 17 people last week. Also attending were representatives from the shootings at Columbine High School in 1999 and Sandy Hook Elementary School in 2012.

“We’re going to be very strong on background checks,” Trump told the room of students, parents and education officials. “It’s not going to be talk like it has been in the past. It’s been going on too long. Too many instances, and were going to get it done.”

A day earlier President Trump announced he signed a directive calling on Attorney General Jeff Sessions and the Justice Department to craft legislation banning bump stocks and other devices that turn semi-automatic firearms into automatic weapons.

After Mr. Trump addressed the crowd, attendees shared their stories and offered solutions for gun violence in schools. …

Andrew Pollack, whose daughter Meadow Pollack was killed in the Parkland shooting asked “how many children have to get shot” before the issue is resolved.

“It should have been one school shooting, and we should have fixed it, and I’m pissed,” he said.

“It’s not about gun laws right now — that’s another fight, another battle,” he said. “We need our children safe.”

Frederick Abt, father of Parkland survivor Carson Abt, suggested having teachers volunteer to receive training and keep firearms “safely locked in the classroom” or hire armed undercover police officers as custodians or cafeteria workers on campus.

President Trump said he and legislators will discuss the idea of allowing teachers with firearm experience to carry concealed weapons on campus to limit response time in the event of a shooting.

“This would be obviously only for people who were very adept at handling a gun, and it would be, it’s called concealed carry, where a teacher would have a concealed gun on them. They’d go for special training and they would be there and you would no longer have a gun-free zone,” Trump said. “Gun-free zone to a maniac — because they’re all cowards — a gun-free zone is ‘let’s go in and let’s attack because bullets aren’t coming back at us.”

…Trump also called for more mental institutions and hospitals citing the lack of a “middle ground” for people who exhibit signs of mental illness but haven’t committed a crime.

“Today if you catch somebody they don’t know what to do with him, he hasn’t committed the crime but he may very well and there’s no mental institution there’s no place to bring them,” he said.

Nicole Hockley, whose 6-year-old son was killed at Sandy Hook, called for mental health services to identify individuals with a lack of “mental wellness,” which she said is characterized by anger and fear, and can’t be diagnosed.

“Rather than arm [teachers] with a firearm, I would rather arm them with the knowledge of how to prevent these acts from happening in the first place,” she said.

“The Second Amendment I believe was for defense and I fully respect that, but these are not weapons of defense, these are weapons of war,” he said. “And I still can’t fathom that I am able to purchase one.” …

From UPI .com. First published Feb. 21, 2018. Reprinted here for educational purposes only. May not be reproduced on other websites without permission from United Press International.

NOTE TO STUDENTS: This is a controversial issue for many Americans, especially those who feel strongly one way or the other about the Second Amendment. Be polite to those with whom you disagree when discussing these types of issues and always give the other person a chance to explain his/her point of view. Also, learn how to recognize when it is no longer productive to discuss an issue on which you strongly disagree.

BEFORE answering the questions, read the “Background” and watch the videos under “Resources” below.

1. What type of meeting did President Trump hold in Washington for survivors of the Parkland, Florida school shooting and families of victims of other school shootings?

2. What was the purpose of the meeting? – What did attendees talk about?

3. What did President Trump say about background checks for firearms? What promise did he make?

4. What did the president call on Attorney General Jeff Sessions to do earlier this week?

5. What do you think of President Trump’s listening session? (Was it effective?)

6. Solutions that have been suggested to prevent a school shooting from happening again include:
-ban assault weapons
-enforce existing gun laws
-raise the minimum age for purchasing a gun to 21
-allow teachers or school employees who are adept/experienced at handling a gun to carry concealed weapons on campus
-install metal detectors in every school and/or with only one entry point (pointed out that since Israel has done this they have had no school attacks)
-place more than one armed security guard in every school
-regular active shooter drills in every school
-address the issue of troubled students who threaten to harm others
-address the prescription drug issue, as almost all school shootings were committed by young men on certain types of medication (Note: Father of Columbine High School victim Rachel Scott said the issues is about connectedness – that most teens facing mental health issues are non-violent)
-require people who have been deemed a potential threat to others to get medical help/counseling or possible involuntary hospitalization

Many people either blame the guns or prescription medications. The father and brothers of Meadow Pollack, who was killed in the Parkland shooting, urged all sides to come together, to listen to all sides, and come up with the solution(s) that will keep kids safe. What do you think of this suggestion?

President Donald J. Trump, Vice President Mike Pence, and Secretary of Education Betsy DeVos sat down yesterday afternoon with a large group of students, teachers, and community leaders to discuss how America must improve safety at schools across the country.

The meeting drew numerous participants from the Parkland, Florida, community. For much of the afternoon, students led the discussion. Fifteen-year-old Justin Gruber reminded attendees that 19 years ago, one of America’s most high-profile mass school shootings happened at Columbine High School. “I was born into a world where I never got to experience safety and peace,” he said.

That needs to change. President Trump has pledged more than just action—he has committed his Administration to finding real, workable solutions to end the violence. “It’s not going to be talk like it has been in the past,” the President told students and families yesterday. “It’s been going on too long. . . . We’re going to get it done.”

That starts with making sure that every voice is heard. … (from WhiteHouse.gov, Feb. 22)

Watch 3 clips from the meeting: