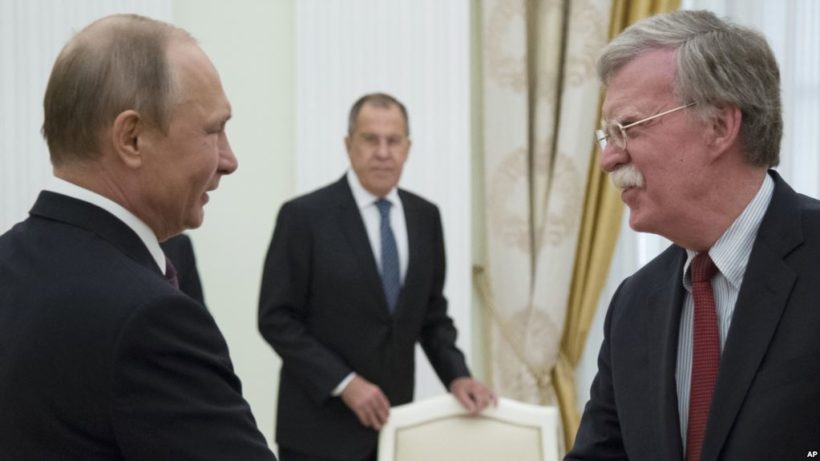 In this June 27, 2018 photo, Russian President Vladimir Putin, left, and U.S. National security adviser John Bolton greet each other as Russian Foreign Minister Sergey Lavrov looks on during their meeting in the Kremlin in Moscow.

(by Susan McFarland, UPI) — President Donald Trump on Saturday said the United States will pull out of a decades-long nuclear deal signed between Washington and Moscow during the Cold War.

Before a campaign rally in Nevada, Trump told reporters unless Russia quits violating the INF, the United States will terminate the agreement.

When asked by a reporter if pulling out of the agreement would lead to the United States developing the weapons, Trump said yes.

“If others get smart and say let’s not develop these horrible nuclear weapons I would be extremely happy with that. But as long as someone is violating that agreement we’re not going to be the only ones to adhere to it,” Trump said.

The New York Times reported on Friday that the Trump administration will tell Russian leaders [this] week about the plan to exit the landmark treaty, partly to enable the United States to counter a Chinese arms buildup in the Pacific.

From United Press International (UPI .com). Reprinted here for educational purposes only. May not be reproduced on other websites without permission from UPI. From an Oct. 20 report.

3. For what reason will the U.S. pull out of the treaty?

4. What did President Trump say would cause the U.S. to stay in the treaty?

5. What will the U.S. do regarding weapons development if the treaty is cancelled?

6. What will ending the INF with Russia allow the U.S. to do in regards to Chinese aggression?

7. Some news reports focus on Russia’s reaction “Russia says very dangerous” …
Some observers suggest the Trump administration is trying to get Russia to come into compliance and abide by the treaty.
a) Considering the fact that Russia has violated the treaty for many years, do you think President Trump’s threat to cancel the treaty is too strong, too weak or the right thing to do? Explain your answer.
b) Ask a parent the same question. Discuss your answers.

The U.S. accused Russia of violating treaty terms with the testing of the SSC-8 cruise missile as early as 2008. The accusation was brought up again in 2014 and 2017. Also in 2013, reports came out that Russia has tested and planned to continue testing two missiles in ways that could violate the terms of the treaty: the SS-25 road mobile intercontinental ballistic missile and the newer RS-26 ICBM.

Russia claims that the American decision to establish bases capable of launching Tomahawk missiles in Poland and Romania [to counter the Russian threat] is a violation of the treaty. (from wikipedia)

Trump was right to pull out of arms treaty:

…In testimony given to the Senate…in April 2017, Admiral Harry Harris observed that Communist China’s People’s Liberation Army’s Rocket Force (PLARF) has developed the largest and most diverse missile force in the world. Approximately 95% of the PLARF’s missiles would violate the terms of the INF Treaty if China were a signatory….

From the American perspective, the problem is not China seeking the means to defend its mainland. No country would seriously consider an unprovoked attack against Chinese cities. The concern is China using its rapidly growing and increasingly lethal land-based missiles to warn off American and allied counter-responses should the PLA decide to invade Taiwan, or else entrench Chinese claims in the East and South China Seas. …

[A] speech by Vice President Mike Pence earlier this month confirms competing with China and preventing Beijing from using its power in ways that adversely affect American interests is the long game. Given this mindset, the INF Treaty which restricts a wide array of missiles will increasingly be perceived as an intolerable restriction on American forces. …

China has said it is “wrong” for the US to cite competition with China as one reason to pull out of the treaty and warns that doing so may well adversely affect the global strategic balance and stability. Closer to the truth is that Trump’s announcement will send a shiver down its spine. It is further indication that America will no longer compete with one hand tied behind its back. (excerpted from an Oct. 22 commentary by John Lee at CNN)