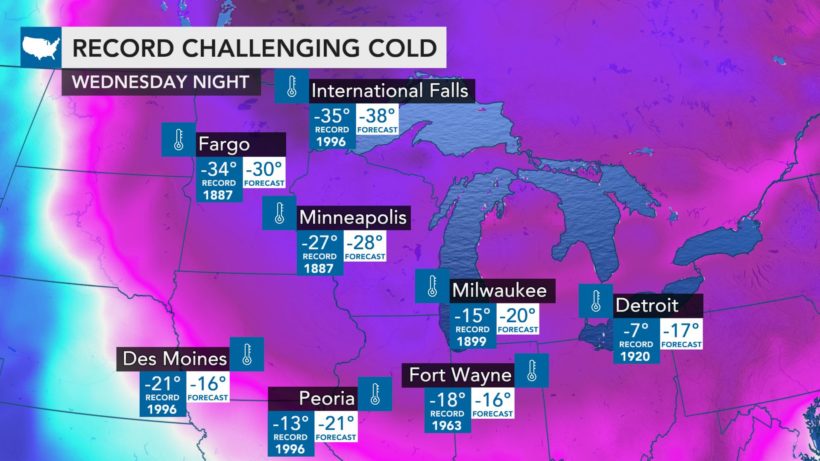 (Associated Press at ABC 7 News) – A deadly arctic deep freeze [has] enveloped the Midwest, forcing widespread closure of schools [and] offices and prompting the U.S. Postal Service to take the rare step of suspending mail delivery to a wide swath of the region because of the cold.

Many normal activities [have] shut down and residents huddled inside as the National Weather Service forecast plunging temperatures from one of the coldest air masses in years. The bitter cold is the result of a split in the polar vortex that allowed temperatures to plunge much further south than normal.

Officials throughout the region were focused on protecting vulnerable people from the cold, including the homeless, seniors and those living in substandard housing.

Some buses were turned into mobile warming shelters to encourage the homeless to come off the streets in Chicago, where the forecast for Wednesday night called for temperatures as low as minus 21 degrees, with wind chills to minus 40.

Major Chicago attractions including the Lincoln Park Zoo, Art Institute and Field Museum weren’t opening Wednesday. Governors in Illinois, Wisconsin and Michigan declared emergencies as the worst of the cold threatened on Wednesday.

“These (conditions) are actually a public health risk and you need to treat it appropriately,” Chicago Mayor Rahm Emanuel said Tuesday. “They are life-threatening conditions and temperatures.”

A wind chill of minus 25 can freeze skin within 15 minutes, according to the National Weather Service.

In Michigan, homeless shelters in Lansing were becoming “overloaded,” Mayor Andy Schor said. They also were filling up in Detroit, [where the weather forecast] for Wednesday is overnight lows around minus 12, with wind chills dropping to minus 35.

…The U.S. Postal Service said it would suspend mail delivery on Wednesday in parts or all of several Midwest states including North and South Dakota, Nebraska, Kansas, Minnesota, Wisconsin, Iowa and Illinois. …

Chicago was turning five buses into makeshift warming centers moving around the city, some with nurses aboard, to encourage the homeless to come in from the cold.

“We’re bringing the warming shelters to them, so they can stay near all of their stuff and still warm up,” said Cristina Villarreal, spokeswoman for the city’s Department of Family and Support Services.

Shelters, churches and city departments in Detroit worked together to help get vulnerable people out of the cold, offering the message to those who refused help that “you’re going to freeze or lose a limb,” said Terra DeFoe, a senior adviser to Detroit Mayor Mike Duggan.

Hundreds of public schools and several large universities from North Dakota to Pennsylvania canceled classes Tuesday or planned to do so Wednesday. …

The cold weather was even affecting beer deliveries, with a pair of western Wisconsin distributors saying they would delay or suspend shipments for fear that beer would freeze in their trucks.

But it wasn’t stopping one of America’s most formidable endurance tests, however – the three-day Arrowhead 135 was going on as scheduled in northeastern Minnesota. Competitors can cover the race route by bicycle, cross-country skis or just running. …

From an Associated Press report at ABC7ny .com. Reprinted here for educational purposes only. May not be reproduced on other websites without permission from ABC 7 News.

1. How has this week’s deep freeze affected the Midwest? (List at least 3)

2. What groups of people need help during the deep freeze?

3. In what states has the U.S. Postal Service suspended all or partial mail delivery?

4. a) How are officials in Chicago helping the homeless?
b) In addition to city agencies, what other groups are helping get people off the streets?
c) What are the predictions for Wednesday night’s temperature and wind chill in Chicago and in Detroit?
d) How does wind chill affect a person who is in it for more than 15 minutes?

OPTIONAL: Visit the website for the Pacific Garden Mission, a homeless shelter in Chicago that has been helping homeless people for over 100 years.

What is Polar Vortex?