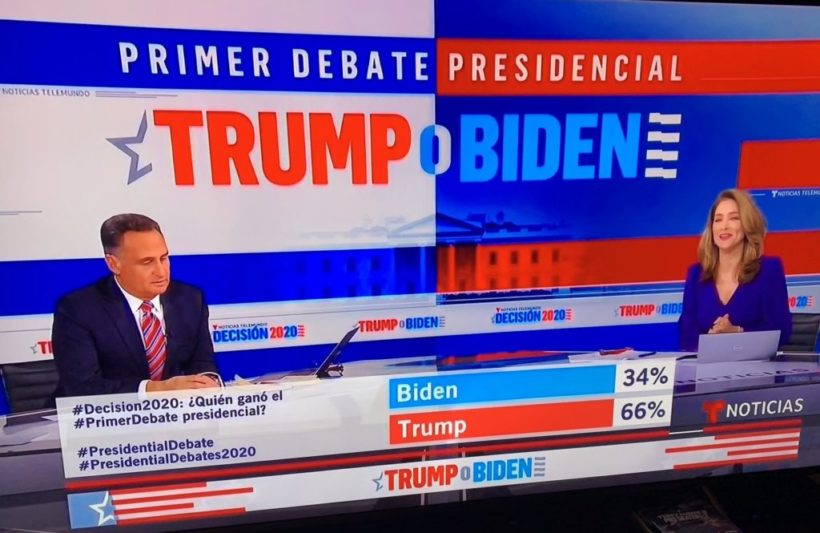 Both candidates have campaigned heavily in the Latino community. Trump’s campaign has attempted to [appeal to] Latino supporters with his Latinos for Trump initiative. Biden made an appearance at a September Hispanic Heritage Month celebration in Florida. Work by the Trump campaign to attract Latino voters may be paying off.

In a poll conducted after the debate, 66 percent of participants told Telemundo they believed Trump won the debate. Only 34 percent of poll participants thought Biden made a better showing in Tuesday’s debate. Telemundo hosts warned the poll was “not scientific” but was based on the responses on the participation of its followers on Twitter.

“Like other news organizations, Noticias Telemundo conducted a Twitter opinion poll last night to capture instant online reaction to the first presidential debate,” a Telemundo spokesperson said in a statement provided to Newsweek. “When the final results were announced on air, Noticias Telemundo prefaced the results by explaining the numbers did not reflect a scientific survey, but instead a real-time online poll among Twitter users.”

[An NBC/Marist poll released in early September showed Biden was dramatically underperforming with Latino voters in the state of Florida. Among Florida Latino voters, which Clinton won by 27 points in 2016 and still lost the state, Trump leads with 50 percent compared to Biden’s 46]. [Recently the president] has touted his popularity with the Latino voting demographic. “We’ve done really well with Hispanics,” Trump said during a July roundtable meeting with leaders from the Latino community. “We like them, they like me, and we’ve helped them a lot with the jobs. Whether it’s jobs, education, or so many other things, it’s been really good.”

“I’ll tell you what,” Biden said. “If I had the talent of any one of these people, I’d be elected president by acclamation.”

Many observers considered Biden’s “Despacito” moment to be cringeworthy. Latinos for Trump used the moment in an advertisement that featured Biden on two separate occasions leaning in to kiss younger women. The English translation of some the song’s lyrics were shown at the bottom of the footage: “Want to slowly breathe on your neck/Let me whisper in your ear.”

Trump’s administration has made obtaining U.S. citizenship more difficult for immigrants by implementing new rules. Those seeking to become naturalized must now prove that they are not likely to wind up on social benefit programs. Biden has promised to roll back Trump’s changes.

“If I’m elected president, we’re going to immediately end Trump’s assault on the dignity of immigrant communities,” Biden said during his nomination acceptance speech at the Democratic National Convention. “We’re going to restore our moral standing in the world and our historic role as a safe haven for refugees and asylum seekers.”

Published at newsweek .com. Reprinted here for educational purposes only. May not be reproduced on other websites without permission from the Newsweek.

About 12% of Latino voters remain undecided this year, the new survey finds.

The Journal/NBC/Telemundo poll includes some warning signs for Mr. Biden: Mr. Trump’s favorability among Latino voters has improved from four years ago. In September 2016, 78% had a negative view of him, compared with 56% today.

2. a) What did the Telemundo anchors tell viewers to consider about the outcome of the Trump-Biden debate poll?
b) Do you think the reporters would have said the same had a large majority of Twitter respondents said they believed Biden won the debate? Explain your answer.

3. a) How has President Trump’s overall favorability rating among Latino voters changed since 2016, according to a September 20 Wall Street Journal/NBC/Telemundo poll?
b) Why do you think this is so?

4. Roll Call reports: Latinos are expected to be the largest minority in this year’s election, with 13 percent of eligible voters. They tend to back Democrats, according to the Pew Research Center.

Recent Pew polling shows Biden losing ground with Latino communities in Florida, where there are approximately 3.1 million eligible Latino voters from diverse backgrounds and countries like Cuba, the Dominican Republic and Venezuela. In a state that’s historically won by thin margins, Biden’s pull with Latinos there could mean the difference between Florida going for Trump or Biden.

An NBC News/Marist poll, released on Sept. 8 shows 50% of Latinos supporting the president over Biden’s 46%. A Quinnipiac poll released on July 23 showed Biden with 50% and Trump at 33% percent of support among Latinos in the state.

Advocates say that although polls can fluctuate as the election nears, when compared with the last presidential election, Biden is underperforming with Latinos in Florida. Hillary Clinton lost Florida to Trump by 1% in 2016 but defeated him among Latinos there 62% to 35%, according to exit polls.

Watch a clip from the Telemundo broadcast: