(Back on Jan. 14) – Teen vaping declared an epidemic 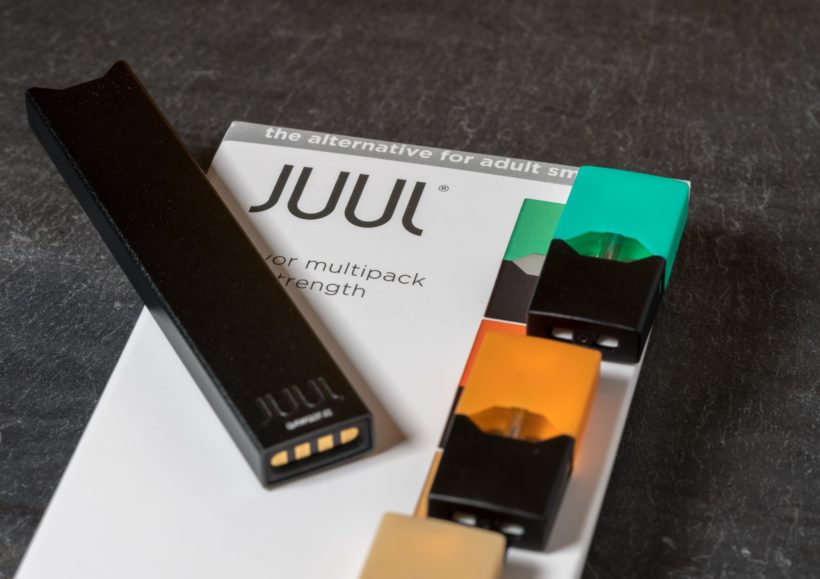 The U.S. surgeon general on Tuesday issued a strong warning against e-cigarette use by young people, called it “unsafe” in any form and termed vaping an “epidemic.”

“Two years after my predecessor sounded the alarm bells, youth e-cigarette use has skyrocketed — so much so today that I am officially declaring e-cigarette use among youth an epidemic in the United States,” said U.S. Surgeon General Jerome Adams….

“And I don’t want there to be any misconceptions about this. I don’t use that word, epidemic, which means a sudden increase above normally expected numbers, I do not use that word lightly,” Adams said.

It’s a considerably sterner and more specific warning than the one Adams referenced from 2016, when the same federal office identified vaping as an emerging public health concern. Since then, studies have shown a sharp uptick among young people using the devices and companies that sell the liquid nicotine in flavors that appeal to teens.

Adams was joined by Health and Human Services Secretary Alex Azar, who emphasized data showing a historic increase in e-cigarette use that outpaces youth use of any other substance.

“The bottom line is that in the data sets we use, we’ve never seen use of any substance, and by America’s young people, rise this rapidly. This is an unprecedented challenge,” Azar said.

According to Adams, of particular concern is the availability of new products, including ones shaped like a USB flash drive. The office has released photos of what the devices look like as a resource to parents.

One such device made by the company JUUL saw a 600 percent surge in sales in recent years, according to Adams. And a typical JUUL cartridge, or “pod,” contains about as much nicotine as a pack of 20 regular cigarettes, his office stated.

“Today, we must protect our nation’s young people from a lifetime of nicotine addiction and associated problems by immediately addressing youth e-cigarette use,” Adams said. “We’re far too often, in health and in public health, late to the game. But now is the time to take action.”

JUUL has said its goal is to help adult smokers by providing them with a “true alternative” to [tobacco] cigarettes. The company has rolled out an age-verification system for its products and [following a threat from the government to ban flavored pods] offered to rein in sales of flavored vaping devices popular with younger consumers, including mango, creme and cucumber.

But the industry’s response wasn’t enough to preempt the surgeon general from issuing its official nationwide warning Tuesday.

“These products also use nicotine salts, which allow particularly high levels of nicotine to be inhaled more easily and with less irritation than the free-base nicotine that has traditionally been used in tobacco products, including e-cigarettes,” according to the surgeon general.

“This is of particular concern for young people, because it could make it easier for them to initiate the use of nicotine through these products and also could make it easier to progress to regular e-cigarette use and nicotine dependence. However, despite these risks, approximately two- thirds of JUUL users aged 15-24 do not know that JUUL always contains nicotine,” the office added.

…E-cigarettes are battery-powered devices that turn liquid nicotine into an vapor that can be inhaled. E-cigarettes have been pushed by manufacturers as an alternative to tobacco cigarettes because it doesn’t produce tar.

Those benefits to the country’s shrinking population of smokers are largely outweighed by the harms posed to the growing population of young vape users, said Dr. Jacques Fontaine, a lung specialist and surgeon at the Moffitt Cancer Center.

“E-cigarettes are just as [chemically] addictive as regular cigarettes,” Fontaine told ABC News. “They are more addictive in the sense that people feel they’re safe.”

As a general rule, doctors say it’s not safe to casually inhale any type of smoke or chemical vapor. In addition to its addictiveness, nicotine can have damaging developmental effects on the human brain for people younger than 25, according to health experts.

The Centers for Disease Control estimates 1 in 5 high school students use the products. That’s more than 3 million current e-cigarette users in the nations high schools, up from 220,000 students in 2011, according to the CDC.

The U.S. Food and Drug Administration has imposed fines on e-cigarette retailers for unlawfully selling e-cigarette products to minors.

From ABCNews .com. Reprinted here for educational purposes only. May not be reproduced on other websites without permission from ABC News.

2. a) Who is the U.S. Surgeon General? Why did he call teen vaping an epidemic?
b) What did Alex Azar, Secretary of Health and Human Services say about teen use of e-cigarettes?

3. a) How many high school students currently use JUUL or similar products?
b) How much nicotine is in one JUUL pod?
c) What percentage of JUUL users aged 15-24 do not know that JUUL always contains nicotine?

6. How are e-cigarettes more addictive than tobacco cigarettes, according to Dr. Jacques Fontaine, a lung specialist and surgeon at the Moffitt Cancer Center in Tampa?

7. a) How do you think most teens will react to the Surgeon General’s warning?
b) Would raising the age to purchase / use JUUL products to 21 reduce the number of teens who vape? Explain your answer.

CHALLENGE: Test your knowledge. Take a quiz at the Surgeon General’s website (scroll down to find the quiz).