(from Citizen-Times.com, Associated Press) FORT COLLINS, Colo. – Talk about a teacher’s dream: No more slouching, no more wiggly little boys and no more snoozing at desks. 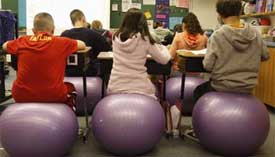 All teachers have to do is ditch the classroom chair. A growing number are replacing them with exercise stability balls more associated with pilates classes than schoolroom lectures as an innovative way to improve student posture and attention.

“They’re awesome,” gushed 10-year-old James Howell, a fourth grader at Bauder Elementary School whose class switched to purple stability balls in January. “They help you focus, they help you keep your structure. And sometimes you get to bounce on them, get the wiggles out.”

The kids in Tiffany Miller’s class sound like little pilates teachers when they talk about their new chairs, dropping phrases like “strengthen your core” and “engage your center.” They don’t roll around wildly or play games with them except in gym class. Instead, they’ve taken to their rubbery seats as naturally as older office workers who sit on stability balls to alleviate back pain.

“The whole theory with the brain is that when your body’s engaged, your brain’s engaged,” Miller said. “I call it actively sitting. They’re maybe moving their legs a little, wiggling some. But their upper body, they’re focused on writing, on the teacher. It really works.”

Research is starting to back up that theory. John Kilbourne, a professor in the Department of Movement Science at Grand Valley State University in Allendale, Mich., switched to stability balls in his college courses last semester and surveyed 52 students on the change.

Nearly all said they preferred sitting on the balls. Students mentioned improvement in their ability to pay attention, concentrate, take notes, engage in classroom discussions and take exams.

“They said the balls improved their focus and their attention, that just everything was better,” said Kilbourne, whose research is published in February’s Chronicle of Kinesiology and Physical Education in Higher Education. “I think it could revolutionize the way we design classrooms.”

Some scientists warn the balls aren’t a miracle cure for bad posture. When people sit on them for long periods of time, bad habits can reappear. And because they don’t have backs, the balls don’t allow sitters to lean back and take pressure off the tailbone, said Fabio Camana, an exercise physiologist at the American Council on Exercise.

“There are certainly some benefits to it,” Camana said. “But it’s got to be used appropriately.”

Camana said the balls have been used for two decades but news reports of classroom teachers using them instead of chairs show a dramatic uptick in the last five years or so. Kids as young as 5 or 6 are using the balls, Camana said, but he worries that without vigilant instructors, pupils may be developing bad habits.

“The intentions are good. But if you’re just going to ask the kid to sit on this thing, more than sort of 10 to 15 minutes, you may be contributing to poor posture,” Camana said.

Back at Bauder Elementary, Miller says she is constantly looking for slouching. Her kids get up at least every half hour, if just for a short stretch.

“You have to work hard at it all day,” Miller said. “They’re kids. You have to constantly remind them to check their posture, keep their feet flat on the floor. And every half-hour or so, we’ll just stop and I’ll say, ‘OK, stand up. Reach to the sky. Touch your toes. OK, sit back down.’ And then we’ll keep going.”

Teachers who use the balls say it’s impractical to expect kids to sit still for hours at a stretch.

“It helps especially for active boys. It gives them an active outlet without taking away from learning,” said Jenny Borovsky, a teacher at St. Paul Academy and Summit School in St. Paul, Minn., who has used stability balls in her seventh and eighth grade math classes for three years.

Perhaps the biggest problem, teachers say, is persuading administrators or parents to go for the change. At L.D. Williams Elementary School in Mitchell, S.D., students who want to use the balls have to bring their own, at a cost of about $30. Fourth-grade teacher Amanda Chada introduced the balls last fall – but she has only three for children to share if they don’t have their own.

“More kids all the time are bringing balls,” says Chada, who rotates the three classroom balls during the day for students without one. “They like that they can move a little bit. They say they’re more comfortable.”

Adults are slowly catching on, said Dottie Powell, who received a county grant this year to put stability balls in her fifth grade class at Orchard View Intermediate School in Martinsburg, W.Va.

“We had a Valentine’s Day party and a grandma came, and she was definitely skeptical and wanted to know why they were sitting on these balls. And then she sat in one and stayed the whole party and loved it,” Powell said.

The best ambassadors for the balls are the pupils themselves.

“Before we couldn’t move on our seats,” said Ana Elliott, a 10-year-old in Miller’s class. “So, really, we just couldn’t learn as well.”

Reprinted here for educational purposes only. May not be reproduced on other websites without permission from The Ashville Citizen-Times.  Visit the website at citizen-times.com.

1. Why are a growing number of teachers replacing classroom chairs with exercise stability balls?

2. How did the students interviewed for this article respond to using stability balls instead of chairs? What did they like or not like about the balls?

3. What problems might arise from the use of stability balls in the classroom, according to Fabio Camana of the American Council on Exercise?

4. Why do teachers who use them like the stability balls? (NOTE: The reporter did not provide information on whether there are teachers who tried using the balls, but then stopped, and their reason(s) for doing so.)

5. Do you think using exercise stability balls as a substitute for chairs is a good idea?  Explain your answer.

6. Should school districts pay for the exercise balls if teachers want to use them? Explain your answer.