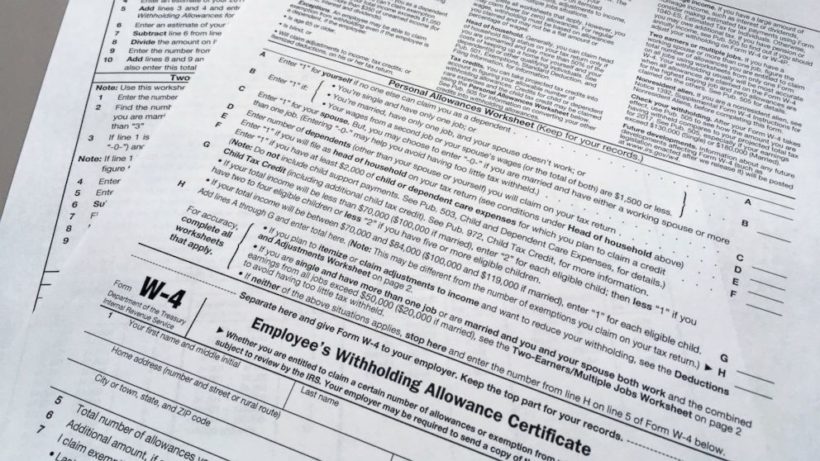 (by Sarah Skidmore Sell, Associated Press – APNews.com) – The [Trump] tax overhaul is beginning to deliver a change that many will welcome — bigger paychecks.

Workers are starting to see more take-home pay as employers implement the new withholding guidelines from the IRS, which dictate how much employers withhold from pay for federal taxes. Those whose checks have remained the same shouldn’t fret — employers have until Feb. 15 to make the changes.

Treasury Secretary Steven Mnuchin has estimated that the new rules will mean more take-home pay for about 90 percent of American workers.

How much extra cash? It depends on several factors, such as workers’ income, how often they are paid and the number of withholdings allowances they claim on their IRS Form W-4 with their employer.

Those whose employers were quick to make the change welcomed the extra money — anywhere from a few dollars to a few hundred dollars [per paycheck].

Wayne Love, who works in managed care in Spring Hill, Florida, got an extra $200 in his paycheck last week, which he said will help offset a $300 increase in the cost of his health insurance.

“I have heard time and again [from the Democrats in Congress] that the middle class is getting crumbs, but I’ll take it!” Love said by email.

Julia Ketchum, a secretary at a public high school in Lancaster, Pennsylvania, said she was pleasantly surprised her pay went up $1.50 a week. She didn’t think her pay would go up at all, let alone this soon. That adds up to $78 a year, which she said will more than cover her Costco membership for the year.

And Todd Anderson of Texas and his fiance, who are both educators, got an extra $200 in their paychecks combined….

…Experts suggest that all taxpayers take a look the new IRS calculator when it becomes available later in February to ensure they are having the correct amount withheld. And they should update the information on their W-4 after the IRS releases a revised version later this year.

For most people though, no change will be needed.

The IRS said the new withholding tables should produce an accurate withholding amount for people with simpler tax situations. But tax experts say those who will still itemize, have larger families or more complicated tax situations may want to take a closer look.

“If they haven’t done it before, this is a really good year to talk to your tax professional,” said Pete Isberg, vice president of government relations for ADP, a payroll provider.

The IRS, payroll and tax professionals have been scrambling to react to the passage of the new tax law. And the IRS says it plans to make further changes involving withholding matters in 2019. Many in the industry say they expect the IRS to update the W-4 form in 2019 in a more dramatic fashion to fully reflect the scope of the law.  …..

AP Economics Writer Josh Boak in Washington contributed to this report. From APNews .com. Reprinted here for educational purposes only. May not be reproduced on other websites without permission from Thomson Reuters.

1. By what date do employers have to implement the new withholding guidelines from the IRS?

3. What will determine how much extra cash an individual taxpayer receives in their paychecks following the implementation of the Trump tax reform?

4. What do tax experts recommend all taxpayers do regarding the tax reform bill?

5. Ask a parent: have you seen an increase in your paycheck? Why do you think this is so?

For a list from Jan. 26 of companies that are increasing pay or giving their employees bonuses, go to foxbusiness.com