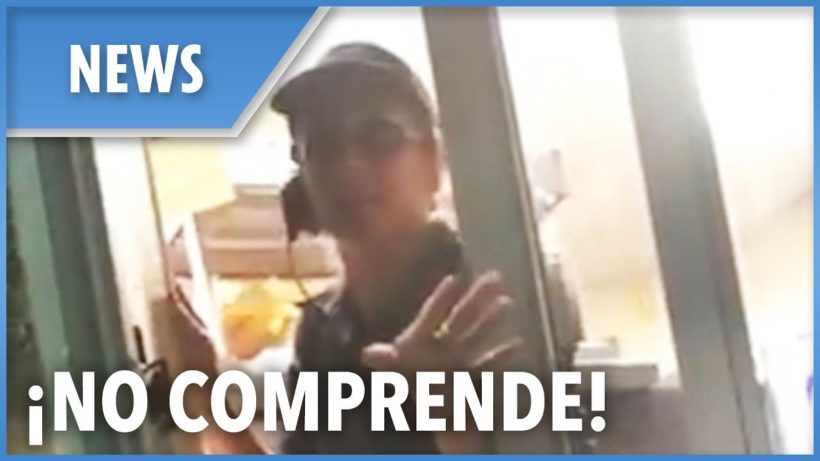 (Compiled from articles by By Mario J. Pentón, Miami Herald and Christopher Brito, CBS News) — An employee of a Taco Bell in Hialeah, Florida refused to take the order of a woman who did not speak Spanish.

The incident occured last Wednesday night, when Alexandria Montgomery was trying to place an order — in English — at a Taco Bell drive thru window. The employee refused to take her order because she wasn’t speaking Spanish.

Montgomery pulled up at the Taco Bell drive-thru in Hialeah to order a quesadilla, CBS Miami reports. She couldn’t place her order over the intercom because she couldn’t understand what the employee was saying. She pulled up to the window, hoping to communicate better face-to-face –– but that only made things more frustrating, as shown by a three-minute video shot by Montgomery. In the video, which was posted Thursday night, Montgomery asked the annoyed woman, “Do you have a manager here?”

“She is in her house sleeping,” the employee replied in Spanish in a dismissive tone. There was no one else to take the order, the employee claimed.

“[Mi vida] Honey, I have a car behind you,” the employee says in Spanish and closes the window. “Can you move please? I have an order behind you. There is no one who speaks English,” the woman tells Montgomery in the video and threatens to call the police.

“This is Hialeah, I’m sorry,” she said in Spanish. — “That doesn’t mean nothing ‘Because this is Hialeah,’” Montgomery said. “This is America!”

Two other Taco Bell workers approached the drive thru window when they heard the altercation, but apparently they did not try to help the customer.

Finally, the customers had to leave without [being helped].

“This incident happened Wednesday night around 10:30 p.m. I contacted the manager and after explaining to her what happened all she did was apologize and say thank you and the call was disconnected,” Montgomery told el Nuevo Herald [the Spanish-language paper associated with the Miami Herald].

She then voiced her concerns with corporate leaders too, saying she thought it’s important for the community to know that these language and cultural barriers exist, and more should be done to knock them down.

“I want this to get out so people can know and be aware of situations like this so it does not happen again,” Montgomery said.

“It really made me feel like I don’t belong here and I grew up here my whole life,” she told CBS Miami on Friday.

A later statement from Taco Bell’s corporate office stated: “This does not meet our customer experience expectations. We have worked quickly to resolve with the customer to ensure this doesn’t happen again. The individual no longer works for the brand.”

In addition to that, Montgomery told NBC6 that the chain offered her a $100 gift card in response to the incident.

“A gift card is not gonna just solve the problem, it’s not gonna give me justice,” she said. “Don’t try to like sweep it under the rug.”

Comments on Facebook were mostly supportive of Montgomery, who described the incident as ‘racist.’

“Hialeah is still part of Florida and, as far as I remember, correct me if I’m wrong, Florida is part of the UNITED STATES OF AMERICA, it’s a country where English is the language we speak. This is a shame for the Hispanic / Latino community,“ commented a Facebook user.

Hialeah is considered the city with the largest Hispanic population in the United States. About 89 percent of its residents speak Spanish as their first or second language and more than 94 percent consider themselves Hispanic or Latino, according to the 2010 census.

Compiled from news reports at the Miami Herald on Sept. 14 and CBS News on Sept. 17.

2. How did the employee reply to customer Alexandria Montgomery’s request to speak to a manager?

3. a) What did the employee suggest the customer should do to be able to purchase food?
b) From paragraph 7: “Two other Taco Bell workers approached the drive thru window when they heard the altercation, but apparently they did not try to help the customer.” What do you think of these employees’ response?

4. a) How did the manager respond to Ms. Montgomery’s phone call the next day?
b) What do you think of the manager’s response?

5. a) How did Taco Bell corporate office respond to Ms. Montgomery’s concerns over her experience?
b) What do you think of corporate’s response?

6. Watch the interview with Ms. Montgomery, as well as the 3-minute video she took while at the Taco Bell drive through.
a) How would you have reacted if you had experienced Ms. Montgomery (and her passenger’s) denial of service?
b) Do you think the employee should have been fired? Explain your answer.

7. Should employees in the U.S. be required to speak English to their customers (and to their fellow employees), or should the customers be required to learn the language of the employees? (Spanish, Portuguese, Chinese [Mandarin or Cantonese], Hindi, Urdu, Arabic, Korean, et al). Explain your answer.