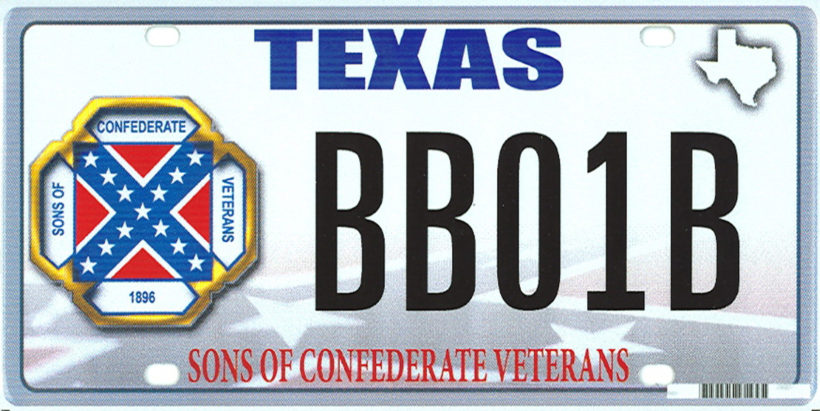 (By Mark Sherman, Associated Press) WASHINGTON – The U.S. Supreme Court heard arguments [last] Monday [in Walker v. Sons of Confederate Veterans, a case originating in Texas that will test whether it is the government or drivers who are “speaking” on specialty license plates – and what either might be allowed to say.

The case goes back to 2009, when the Texas branch of the Sons of Confederate Veterans (SCV), which honors soldiers who fought for the Confederacy in the Civil War, submitted a design proposal for a specialty license plate to the Texas Department of Motor Vehicles that included a Confederate flag. The DMV board that voted on the proposals fielded angry public comments and twice rejected the plate as an offensive celebration of slavery.

Texas – which does celebrate an annual Confederate Heroes Day – asserted in a case brief that it “is fully within its rights to exclude swastikas, sacrilege, and overt racism from state-issued license plates that bear the State’s name and imprimatur.”

In its own brief, the SCV [argued] that having the annual holiday shows that “The State apparently does not believe that the ‘message’ of the Confederate flag is offensive to the public, or, if it is offensive, the State certainly does not shy away from its expression because of such offense.”] [At the heart of the Texas case is the nature of the license plates. Texas argues that as government property, the state has the right to control the language on the plates, and citizens have the right to display (or not display) the vanity plates.

The SCV says that the state, by starting the specialty license plate program, has made it a venue for private speech. Using a “reasonable test” theory, it argues that any person seeing the plate would know that the vehicle owner made a decision to display it, to express their own personal viewpoint.]

Nine other states allow drivers to display plates with the flag, an image that some Southerners see as part of their heritage but many view as a symbol of slavery and repression.

Specialty license plates are big business in Texas. They brought in $17.6 million last year, and state officials said there are now nearly 450 messages to choose from.

The state rarely rejects a specialty plate, but it did turn down a request by the Texas division of the Sons of Confederate Veterans for a license plate with its logo bearing the battle flag. The group’s lawsuit led to Monday’s hearing.

The justices seemed uncomfortable with arguments advanced by the state in defense of its actions – but also by the Sons of Confederate Veterans’ argument.

If the court finds the state must permit the battle flag on license plates, several justices wanted to know if a swastika, a racial slur and a call for jihad would be allowed if someone requested them.

Yes, lawyer R. James George Jr. said on behalf of the veterans group. “I just don’t think the government can discriminate based on content,” he said.

The result of such a ruling, Justice Anthony Kennedy said, probably would end the state’s program of allowing many specialized license plates. “If you prevail, it’s going to prevent a lot of Texans from conveying a message,” Kennedy said.

More skeptical about the state’s argument, Chief Justice John Roberts and Justice Samuel Alito said the sheer number of messages and their wide range show that the state’s only interest is money.

“They’re only doing this to get the money,” Roberts said.

Texas Solicitor General Scott Keller said the state makes the plates and owns them. “Texas has its name on every license plate,” Keller said.

Car owners remain free to express any message they wish by attaching bumper stickers or painting their cars, he said.

Texas commemorates the Confederacy in many ways. The battle flag is etched on a century-old Civil War monument on the grounds of the state Capitol in Austin.

“In a free society, offensive speech should not just be tolerated, its regular presence should be celebrated as a symbol of democratic health — however odorous the products of a democracy may be,” Hentoff, O’Rourke and others said in a brief backing the group.

First published March 23, 2015. Reprinted here for educational purposes only. May not be reproduced on other websites without permission from the AP. (Bracketed excerpts are from a Bloomberg News story and The National Constitution Center.)

1. a) What is the SCV?
b) What case did the U.S. Supreme Court hear last Monday involving the SCV?

3. a) What question did several justices ask?
b) What concern did Justice Kennedy present?

4. Why did Chief Justice Roberts and Justice Alito express skepticism about the state’s argument?

5. In a brief backing the SCV, several groups including the ACLU wrote, “In a free society, offensive speech should not just be tolerated, its regular presence should be celebrated as a symbol of democratic health — however odorous the products of a democracy may be.” What do you think?

7. This is an issue of whether an individual’s constitutional rights are being violated (not whether some are offended by others’ speech). But apart from the constitutional rights issue, should one side give in and try to understand the other’s point of view? If so, which one? Do you think the SCV is racist for wanting to honor their ancestors who fought for the Confederacy? Do you think either side is being unreasonable? Do you think your opinion would be different based on whether you are from the North or the South? or based on your race? Explain your answers.

From the National Constitution Center:  The Court is considering two questions.

First, does the specialty license plate program constitute private speech under the First Amendment or is it government speech?

And if the license plate program is private speech, is the rejection of the Confederate Flag plate an impermissible “viewpoint discrimination” or is it a reasonable “content discrimination”?

The Courts have decided in the past that the government can restrict free-speech content, but only in a very narrow way and if there is a compelling state interest. In this case, the argument from Texas will be that it can control all messages on specialty license plates, regardless of their viewpoint, through its government speech powers. It also will argue that if the plates represent private speech, it can’t be forced to take part in a debate “regarding the proper understanding or significance of the Confederate battle flag.”

And the Sons of Confederate Veterans will point to the Texas DMV Board policy that it can reject designs that “might be offensive to any member of the public” as clear discrimination against almost any private viewpoint. (read more at: constitutioncenter.org/2015/03/supreme-court-hears-confederate-license-plate-case-today)

Read the transcript of the oral arguments at the Supreme Court: supremecourt.gov/oral_arguments/argument_transcripts/14-144_5i36.pdf