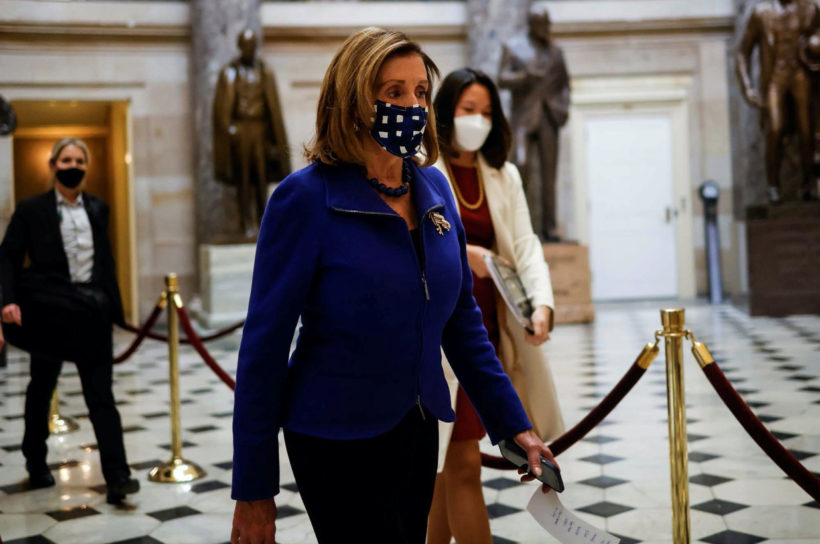 (Compiled from The Hill, NY Post, Epoch Times) — Republicans from the Committee on House Administration on Friday requested that the House Sergeant at Arms impose a fine on House Speaker Nancy Pelosi (D-Calif.) for breaking her own rule by allegedly bypassing a metal detector on her way into the House chamber.

“Speaker Pelosi broke her own rules this week by entering the House Chamber without going through security. We are demanding she face the same fines as every other member of Congress,” the House Admin Committee tweeted, along with a copy of the letter.

“What was observed was a clear violation of House Resolution 73 [which was put in place Feb. 2 by Pelosi] and you are required by House Rules to impose this fine. Please inform us once the fine has been assessed.”

The speaker put the rule in place specifically targeting Republican members who have ignored her orders to go through the metal detectors she installed outside the House chamber following the incursion into the Capitol by protesters on January 6. House Democrats then voted with Pelosi last week to impose the $5,000 fine for first offense and $10,000 for the second for members who fail to comply with the new screenings (those who choose to bypass the metal detectors).

Many Republicans criticized the move to install the metal detectors, arguing the threat was coming from outside the building — not members. Several GOP lawmakers opted to bypass the detectors, so Democrats passed the measure implementing the huge fines for those who bypass the screening.

Earlier Friday, The Post reported that Reps. Louie Gohmert (R-Texas) and Andrew Clyde (R-Ga.) were the first House members hit with the exorbitant fine, which is taken directly from their $174,000 salaries (more than one week’s salary).

Gohmert said he will appeal, noting that he usually complies with the metal detectors, but didn’t on a single occasion after stepping out to use the bathroom.

“Unlike in the movie ‘The Godfather,’ there are no toilets with tanks where one could hide a gun, so my reentry onto the House floor should have been a non-issue. Since I had been complying with the metal detector requirement despite the Constitutional issue, I was surprised to receive a notice today stating that I had not complied with their policy and that I would be fined $5,000.

“I will be appealing the fine and taking whatever action is necessary, especially considering this policy is unconstitutional,” Gohmert said in a statement.

Blodgett responded to the Committee’s request to fine the Speaker by telling the members that he has not received a complaint from the Capitol Police about a violation by Pelosi.

“House Sergeant at Arms imposes the fine after receiving an unusual occurrence report from the United States Capitol Police (USCP)… Only the USCP can determine whether an individual has failed to complete security screening as only the USCP has sufficient training to determine compliance with USCP screening procedures,” the Sergeant at Arms wrote.

The text of the resolution does not require a report from the USCP for a fine to be imposed but does authorize the Sergeant at Arms to establish policies and procedures to implement the resolution.

Rep. Gohmert asked on Twitter, “Why isn’t the Speaker of the House being fined for skirting the metal detector?”

“Speaker Pelosi made the rules. She must live by her rules like everyone else,” Rep. Andy Biggs (R-Ariz.) wrote on Twitter.

Rep. Debbie Lesko tweeted, “Pelosi once again pushing ‘Do as I say, not as I do’ placing fines on Republicans, but not her for same action. Hope America sees this for what it is… Abuse of Power.”

[Prior to installing the metal detectors outside the House chambers, Speaker Pelosi imposed fines for those [Republicans] who fail to wear face masks in the House; $500 fine on the first offense and a $2,500 for a second offense. These fines will also be deducted directly from members’ salaries].

Compiled from articles byJuliegrace Brufke, The Hill, Laura Italiano, New York Post and Ivan Pentchoukov, The Epoch Times. Reprinted here for educational purposes only. May not be reproduced on other websites without permission.

1. What rule did Democratic Speaker of the House Nancy Pelosi implement last week?

2. a) For what reason did Speaker Pelosi install metal detectors at the entrance to the House chamber?
b) How did Republicans refute this claim?

3. a) What is the fine for breaking the rule?
b) Why did Speaker Pelosi and her Democratic colleagues impose fines for Congress members who bypass the metal detectors?

4. a) How much were two House Republicans fined on Friday?
b) What was Speaker Pelosi seen by multiple House members doing later the same day?

6. Do an internet search for this news story. How many of the following reported it? CNN, ABC, NBC, CBS, NY Times, Washington Post, LA Times, any state news outlet…?

7. a) Why do you think the Capitol Police did not report Pelosi’s violation of her own rule to the Sergeant at Arms, as they should have done to follow proper procedure? Explain your answer.
b) Speaker Pelosi was already caught having her hair done inside a salon, without a mask, when salons were closed for all other California residents and masks were mandated. What do you think of Speaker Pelosi’s refusal to follow rules she imposes upon others?
c) What do you think of Pelosi’s implementation of a $5,000 then $10,000 fine for her colleagues who will not comply with her orders? Explain your answer.

Duties include overseeing the House floor and galleries, the House Appointments Desk, the House garages and parking lots, as well as administering all staff identification badges. (from house.gov)

The Committee oversees the management of the Library of Congress, Smithsonian Institution (including the National Zoo), Chief Administrative Officer, Clerk of the House, Sergeant at Arms, House Inspector General, United States Capitol Police, Government Publishing Office, Architect of the Capitol, and the Office of Congressional Accessibility Services. (from cha.house.gov)

More to the story:
When several House members ignored the metal detectors and entered through what’s known as “the speaker’s lobby,” Pelosi began issuing fines for evading the metal detectors. Rep. Louis Gohmert was fined $5,000 after briefly leaving the floor to go to the bathroom.

But Pelosi herself is guilty of the exact same thing. Rep. Rodney Davis caught Pelosi entering through the speaker’s lobby while evading the detectors.

“She opened the session on the floor, she came through what is known as the Speaker’s lobby,” Davis said. “We are all told, one Republican was fined for doing this just yesterday, that you cannot walk through those entrances unless you are disabled.”

Crenshaw said Pelosi should pay the fine because her action was “against her own rules.”

“Now is this a smart rule? No. Is this a rule that makes sense? No of course not. But that’s not the point, the point is they’re her rules. She’s literally confiscated property in the form of money, which we think is unconstitutional, but in any case they’re doing it,” the Texas Republican continued.

“She won’t abide by the rules herself so we’re going to make a huge push for her to actually have to pay that fine,” Crenshaw said.

Davis called the Capitol Police to report the incident. The police are then supposed to send a report to the acting Sergeant-at-Arms, Timothy Blodgett, so he could issue the fine. [But the Capitol Police] never reported the incident. “Capitol Police cannot only file reports of violations on Republicans and look the other way when the most powerful person in the House, the speaker, flouts her own rules,” Davis said. 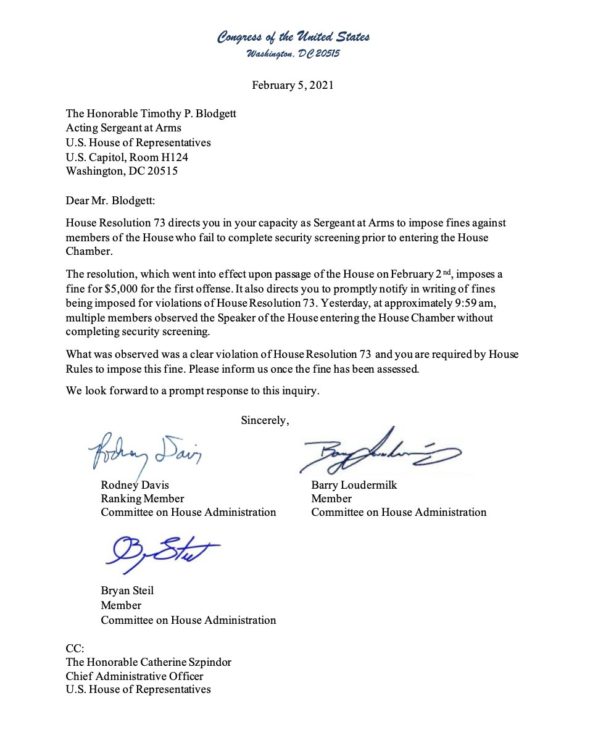