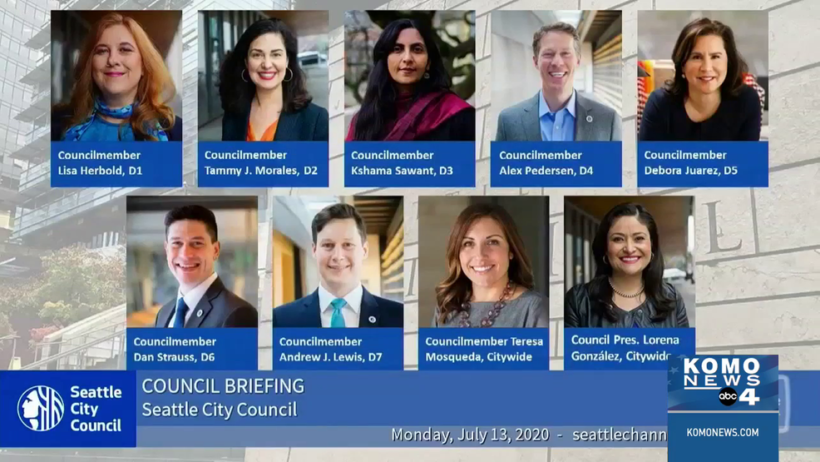 (by Louis Casiano, New York Post) — Seattle Mayor Jenny Durkan plans to sign a new city budget that will cut the police budget by 18% despite homicides reaching record highs not seen in a decade.

Council members overwhelmingly voted last week to cut funds for police training and overtime and to eliminate dozens of vacant positions within the Seattle Police Department after months of contentious talks. The reductions fall short of the 50% that local activists demanded amid nationwide protests against [what they see as widespread] police brutality and racial injustice.

The council also decided to transfer parking enforcement officers, mental health workers and 911 dispatchers out of the police department.

“I believe we are laying the groundwork to make systemic and lasting changes to policing,” Durkan said in a statement last week. “We have rightly put forward a plan that seeks to ensure SPD has enough officers to meet 911 response and investigative needs throughout the city, while acknowledging and addressing the disproportionate impacts policing has had on communities of color, particularly Black communities.

“I applaud the City Council for taking a more deliberate and measured approach to the 2021 Seattle Police Department budget than occurred this summer which led to the resignation of former SPD Chief Carmen Best,” Durkan said in the statement.

The budget also directs the city to invest up to $100 million for projects in communities of color and the hiring of 100 police recruits next year. …

The new budget comes as the city marked its 55th murder of the year Monday with the fatal shooting of a man in the North Beacon Hill neighborhood. Another man was also shot in the same incident but survived.

Like other big cities [which are run by progressive Democrats], Seattle is seeing a sharp rise in violent crime. The city recorded 28 homicide victims last year and 32 in 2018, according to police figures. Going back to 2008, the last year of data available, murders never topped 30 prior to 2018.

Burglaries are also up. This year, the police department has reported 8,418 burglary incidents, compared to 7,634 in 2019.

Calls to cut police funding intensified in June after the killing of George Floyd [as he was being arrested by] Minneapolis police [officers]. That same month, demonstrators occupied several blocks in the city’s Capital Hill neighborhood, [declaring it autonomous zone and naming] it the Capitol Hill Organized Protest area or CHOP.

Incidents inside the zone included a fatal shooting, vandalism and other forms of violence…

Best stepped down in August after disagreements with city leaders over the potential slashing of police budgets and proposals to cut around 100 officers.

“I believe 100% that they were putting me in a position destined to fail. Cutting a police department that already had low staffing numbers, that was already struggling to keep up with the demand,” Best told NPR after she stepped down. “How are we going to provide for adequate public safety in that environment?”

3. Re-read Mayor Durkan’s statement in paragraph #4. What do you think of her viewpoint? –
a) Will cutting the department’s budget allow police “to meet 911 response and investigative needs throughout the city?” Explain your answer.
b) What do you think the mayor means when she states that the cuts to the police budget “acknowledges and addresses the disproportionate impacts policing has had on communities of color, particularly Black communities”?
c) Do you think cutting the police budget will have a positive, negative or no impact on the police department’s ability to protect and serve the residents of the city? Explain your answer.

4. What additional provisions are included in Seattle’s budget?

5. a) How has the murder rate, as well as the burglary rate, changed in Seattle in the past two years?
b) What effect, if any, do you think the ongoing protests and opposition to the police (by citizens as well as the city council and mayor) have on the crime rate?

6. a) By how much did local activists want the police budget to be cut?
b) Do you support or oppose this idea? Explain your answer.

CHALLENGE: Police, government officials, billionaire tech CEO’s, students, teachers, employees, bosses, citizens… – all operate under the rule of law. What do you know about the Rule of Law? – What is it?