Across the country, passengers simmered over being forced to choose scans by full-body image detectors or probing pat-downs. Top federal security officials said Monday that the procedures were safe and necessary sacrifices to ward off terror attacks.

Despite officials’ insistence that they had taken care to prepare the American flying public, the flurry of criticism from private citizens to airline pilots’ groups suggested that Napolitano and other federal officials had been caught off guard. 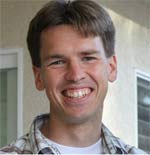 At the San Diego airport, a software engineer posted an Internet blog item saying he had been ejected after being threatened with a fine and lawsuit for refusing a groin check after turning down a full-body scan. The passenger, John Tyner (see photo), said he told a federal Transportation Security Administration worker, “If you touch my [groin], I’m gonna have you arrested.”

Tyner’s individual protest quickly became a web sensation, but questions also came from travel business groups, civil liberties activists and pilots, raising concerns both about the procedures themselves and about the possibility of delays caused by passengers reluctant to accept the new procedures.

“Almost to a person, travel managers are concerned that TSA is going too far and without proper procedures and sufficient oversight,” said Kevin Mitchell, chairman of the Business Travel Coalition, an advocacy group representing corporate travel departments. “Travel managers are hearing from their travelers about this virtually on a daily basis.”

Jeffrey Price, an aviation professor at Metropolitan State College of Denver, said two trends are converging: the regular holiday security increases and the addition of body scanners and new heightened measures stemming from the recent attempted cargo bombings. Also, several airports are short-staffed, which will add to delays, Price said.

Homeland Security and the TSA have moved forcefully to shift airport screening from familiar scanners [metal detectors] to full-body detection machines. The new machines show the [naked] body’s contours on a computer stationed in a private room removed from the security checkpoints. A person’s face is never shown and the person’s identity is supposedly not known to the screener reviewing the computer images.  [Some passengers have expressed concern that it is also possible to save the images.]

Concerns about privacy and low-level radiation emitted by the machines have led some passengers to refuse screening. Under TSA rules, those who decline must submit to rigorous pat-down inspections [called “enhanced pat-downs”] that include checks of the inside of travelers’ thighs [in their groin area] and buttocks. The American Civil Liberties Union has denounced the machines as a “virtual strip search.” …..

Douglas R. Laird, a former security director for Northwest Airlines, said it’s the resistance to these measures that will cause the most delays. The new enhanced pat-downs, an alternative to body scanners, take more time – about 2 minutes compared with a 30-second scan. Delays could multiply if many travelers opt for a pat-down or contest certain new procedures.

Beyond the scanning process, passengers will also be subject to greater scrutiny of their luggage and personal identification and stricter enforcement of long-standing rules like the ban on carry-on liquids over 3 ounces.

On Monday, top security officials were out in force to defend the new policies. Napolitano wrote an op-ed piece in USA Today insisting that the body scanners used at many airports were safe and any images were viewed by federal airport workers in private settings.

Napolitano later said in a news conference at Ronald Reagan National Airport that she regretted the growing opposition to moves by the federal government to make flying safer. But she said the changes were necessary to deal with emerging terrorist threats such as a Nigerian man’s alleged attempt to blow up a jetliner bound from Amsterdam to Detroit last Christmas Day using hard-to-detect explosives. Authorities allege that the explosives were hidden in the suspect’s underwear.

There are some 300 full-body scanners now operational in 60 U.S. airports. TSA is on track to deploy approximately 500 units by the end of 2010.

1. What choice are airline passengers being forced to make that has many upset?

2. What did California passenger John Tyner do that resulted in the TSA threatening him with a lawsuit and an $11,000 fine (TSA first threatened him with a $10,000 fine)?

3. How do travel companies view the TSA’s new enhanced screening?

4. Why don’t passengers want to be subjected to going through the full-body scanner?

5. How long does an enhanced pat-down take?

6. After having him escorted out of the security area to leave the airport, the TSA supervisor told John Tyner that he was facing a fine for leaving security. The supervisor said that once a person enters security and begins the screening process, he is not permitted to leave until he is screened. What do you think of this regulation? Explain your answer.

ON THE USE OF WHOLE-BODY SCANNERS IN U.S. AIRPORTS:

The Transportation Security Administration, (TSA) was formed immediately following the tragedies of Sept. 11. The agency is a component of the Department of Homeland Security and is responsible for security of the nation’s transportation systems.  Read the TSA’s explanation of their “whole-body imaging” machines used for airport security at tsa.gov/approach/tech/ait/index.shtm.

Read about the Privacy Coalition’s “National Opt-Out Day” and their May 2009 letter to DHS Secretary Janet Napolitano at privacycoalition.org/stopwholebodyimaging.

The Electronic Privacy Information Center (EPIC) is a public interest research center in Washington, D.C. established in 1994 to focus public attention on emerging civil liberties issues and to protect privacy, the First Amendment, and constitutional values.  EPIC announced a national campaign on May 18, 2009 to suspend the use of “Whole Body Imaging” — devices that photograph American air travellers stripped naked in US airports. The campaign responds to a policy reversal by the TSA which would now make the the “virtual strip search” mandatory, instead of voluntary as originally announced. EPIC and others say that there are inadequate safeguards to prevent the misuse of the images. They are asking Homeland Security Secretary Janet Napolitano to suspend the program and to allow for public comment.  Read an article posted at StudentNewsDaily on EPIC’s campaign at studentnewsdaily.com/daily-news-article/airport-security-bares-all-or-does-it.