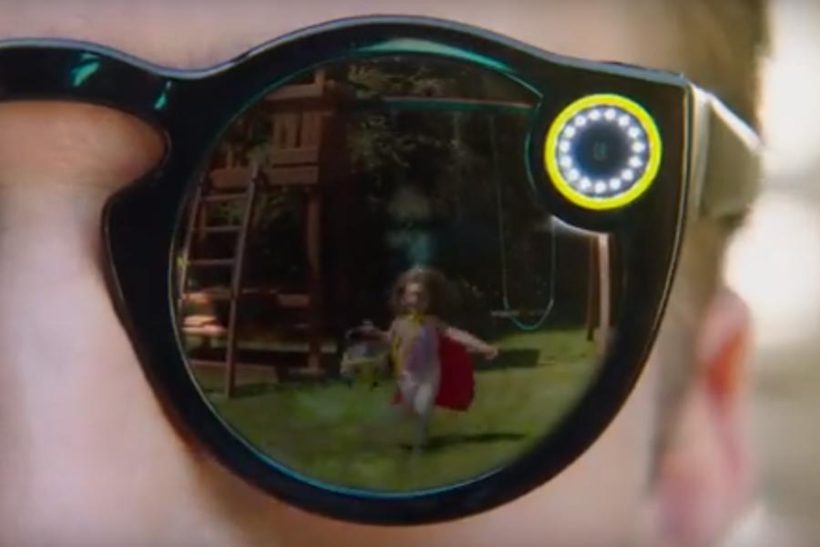 The camera in Spectacles has a 115-degree field of view, which is wider than that of a normal smartphone camera, located on the frames near the left eye.

“Imagine one of your favorite memories. What if you could go back and see that memory the way you experienced it? That’s why we built Spectacles,” the company said in a blog post.

Spectacles, or Specs for short, can record up to 30 seconds of video at a time. Lights on the inside and outside of the frame turn on to let other people know you’re recording.

Footage can be uploaded directly to a user’s Snapchat account in the Memories folder using Bluetooth or Wi-Fi. The videos are also stored on the sunglasses, so you don’t need your phone nearby while recording.

The sunglasses come in a rechargeable case that can hold a week’s worth of use when fully charged. The sunglasses themselves can last a full day on a single charge.

Spectacles will cost $130, and will be available in limited quantities later in the fall. There will be three options: black, blue and coral.

In a separate blog post, founder Evan Spiegel explained why he’s dropping the word “chat” like this: “When we were just getting started it made sense to name our company Snapchat Inc., because Snapchat was our only product! Now that we are developing other products, like Spectacles, we need a name that goes beyond just one product.”

The change also has a more serious business purpose — to make it easier for people to distinguish the company from its services. The name of the app will stay the same, for example, but if people want to search for news about the company specifically, they’ll have to look for Snap Inc.

Snapchat launched five years ago and is estimated to be worth as much as $22.7 billion.

The company famously turned down a $3 billion buyout offer from Facebook in 2013 and has plans to go public.

CNNMoney (New York) First published September 24, 2016. Reprinted here for educational purposes only. May not be reproduced on other websites without permission from CNN Money. For the original article, visit the CNN Money website.

1. a) What are Spectacles?
b) How do they work? Describe the features of this new product.

2. How much will Spectacles cost?

3. Why did the company build Spectacles?

4. For what reasons did Snapchat change its name?

5. Read an excerpt from a September 26 Time article:

But Google shelved the $1,500 gadget only a few years later.

Widely panned as functionally unhelpful and visually dorky, Glass never reached mainstream adoption. (The company is said to be working on a new version aimed at business customers rather than everyday consumers.)

Sony, Epson, and a handful of other companies have also tried their hand at “intelligent glasses.” And yet a future in which we’re all walking around with digitally enhanced eyewear seems as far off as ever before.

Evan Spiegel, the 26-year-old founder of Snapchat, is now betting he [can succeed with] camera-equipped eyeglasses called Spectacles.

Spectacles are different from Google Glass and similar devices in several important ways:

Speaking to The Wall Street Journal, Spiegel described Spectacles as a “toy” ideal capturing occasions like barbecues and outdoor concerts. Perhaps the most important difference between them and Glass: Spectacles actually look like regular sunglasses….

Google Glass, meanwhile, was meant to be more than just a wearable camera. Glass is better described as a miniature face-mounted computer. Complete with tiny display, Glass worked with users’ smartphones to show information like incoming texts, GPS directions, and even cooking recipes.

Google pitched Glass as a high-tech fashion accessory, a wearable camera for adrenaline junkies and photography enthusiasts and a hands-free computer for the workplace all rolled into one. That might have been its biggest problem. Glass did many things, but did few of them particularly well. That left it without any single use case impressive enough to help it break into the mainstream. (Its overtly sci-fi design and creepiness factor didn’t help.)

Spiegel’s gadget may be different than Glass, but his firm faces a similar challenge in convincing people to wear a gadget on their face. Snap Inc. has a few advantages here. Unlike Glass, Spectacles are a simple, focused and relatively affordable product designed to do one thing well. Meanwhile, Snap Inc. is creating the specialized camera inside its glasses, potentially allowing the firm to create apps and experiences specifically tailored for its photographic output. Having some kind of “killer app” might help convince consumers to give Spectacles a try.

Still, Snap Inc. will likely come up against what may have ultimately been the death knell for Google Glass. The idea of a face-mounted camera was viewed as a privacy nightmare by some, since it wasn’t always clear when it was recording. The devices were banned from some bars, restaurants and theaters, especially in the tech-forward Silicon Valley area.

How Snap Inc. learns from Google’s experience in terms of the “creepiness factor” will in part determine how Spectacles are received by the public.