Russian spy ship off US coast acting in ‘unsafe manner’ 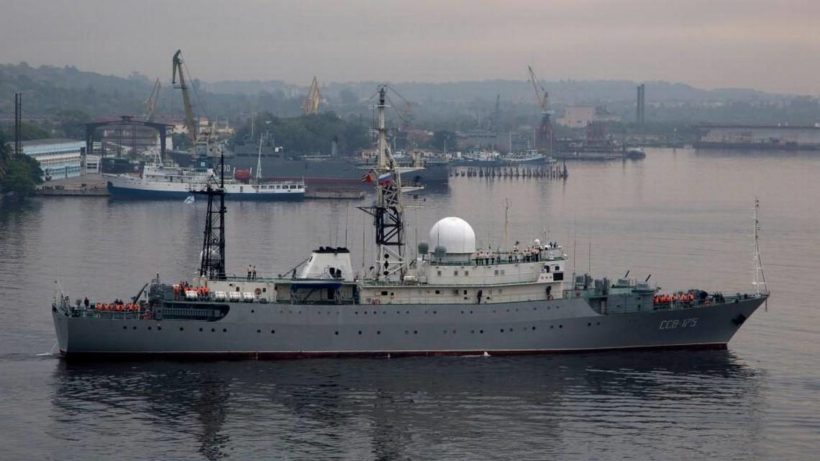 A Russian surveillance ship called the Victor Leonov, shown in Cuba in 2015, has been “operating in an unsafe manner” off the Southeast coast between Florida and South Carolina, according to the United States Coast Guard. (Photo: Desmond Boylan / AP)

(by Ryan Browne, CNN) — A Russian spy-ship has returned to international waters off the southeastern coast of the United States and is operating in what two US officials told CNN is an “unsafe manner.”

The Viktor Leonov, a Russian surveillance ship, has been sailing off the coast of South Carolina and Florida in the last few days, officials tell CNN, adding that the ship’s actions were determined to be unsafe because it is not using running lights in low visibility weather and it is not responding to commercial vessels’ attempts to communicate to avoid potential accidents.

The official said the Vishnya-class spy ship was also engaged in “other erratic maneuvers.”

A spokesperson for the US Coast Guard confirmed to CNN that the Coast Guard was broadcasting a “Marine Safety Information Bulletin” to alert mariners in the area to the Russian ship’s presence and its behavior.

“The United States Coast Guard has received reports indicating that the RFN VIKTOR LEONOV (AGI-175) has been operating in an unsafe manner off the coast of South Carolina and Georgia. This unsafe operation includes not energizing running lights while in reduced visibility conditions, not responding to hails by commercial vessels attempting to coordinate safe passage and other erratic movements,” the bulletin said.

“Vessels transiting these waters should maintain a sharp lookout and use extreme caution when navigating in proximity to this vessel. Mariners should make reports of any unsafe situations to the United States Coast Guard,” it added.

A defense official told CNN that the US Navy’s USS Mahan, an Arleigh Burke-class destroyer, was operating close to the Russian ship.

The Viktor Leonov regularly patrols in international waters along the eastern coast of the US, having done so every year since 2015.

The Russian vessel also routinely operates in the Caribbean, including Cuba and Trinidad and Tobago.

The Russian ship’s presence off the US coast comes as the US Navy’s Arleigh Burke-class guided-missile destroyer the USS Ross visited Constanta, Romania, Monday for what the Navy called “a scheduled port visit,” part of the US effort to bolster its presence in the Black Sea and support regional partners such as NATO ally Romania.

Russia has boosted its military presence in that area since it seized Crimea from Ukraine in 2014 and it regularly shadows American warships while they operate in the Black Sea.

“Crimea has really more or less, according to our civil society folks, has become an armed camp,” the US State Department’s Assistant Secretary for Democracy, Human Rights, and Labor Rob Destro, told reporters Monday as he discussed “the militarization of Crimea.”

Tensions between Moscow and Washington remain high. Just days ago Russian Foreign Minister Sergey Lavrov visited the White House and repeatedly raised Russian concerns about the US potentially dismantling the last remaining nuclear arms treaty between the two powers, a move that could reignite a US-Russia arms race.

Published by CNN .com on December 17, 2019.  Reprinted here for educational purposes only. May not be reproduced on other websites without permission from CNN.

2. What unsafe actions did the Russian ship engage in?

3. What warning did the US Coast Guard give mariners in the area?

4. What is the US response to the Russian ship’s actions?

5. For how long has the Viktor Leonov been patrolling the international waters along the eastern coast of the U.S.?

6. a) Read the “Background” below. Do you think the U.S. should be concerned about Russian military aggression, or are they just trying to make a little noise to show they’re still in the game? If not, what do you think is their motive for these patrols? Explain your answer.
b) Do you know anyone who is or was in the military? If so, ask the same question and discuss your answers.

In other news on the Russian navy, Russia’s only aircraft carrier suffered a massive fire Thursday (Dec. 12, 2019) that killed two crew members, injured another 11 people and significantly damaged the ship that has seen multiple incidents throughout its service since its launch in 1985.

Last week’s fire on the Admiral Kuznetsov broke out during welding work at a shipyard in the Arctic port of Murmansk and spread quickly through the carrier’s internal compartments. The fire will further push back the work to fit the ship with modern control systems and new weapons.

Belching black smoke when underway, the Admiral Kuznetsov looks outdated compared with the nuclear-powered carriers of the United States. However, the Kremlin has used it to project military might far from Russia’s shores.

In 2016, the Admiral Kuznetsov was deployed to the eastern Mediterranean as part of Russia’s campaign in Syria, launching the first carrier-mounted attacks in Russian naval history.

It lost two carrier-launched fighters in incidents during the Syria mission. (from a Dec. 13 Associated Press report at Navy Times)

Watch a similar CNN report from 2018: