Republicans fear for their safety as Obamacare protests grow 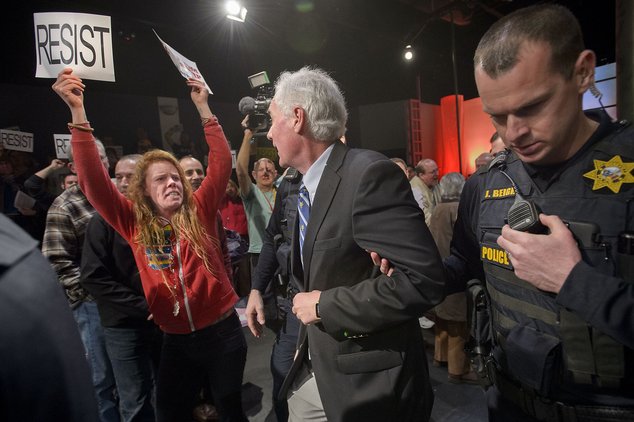 (by Susan B. Glasser, Politico) – House Republicans during a closed door meeting Tuesday discussed how to protect themselves and their staffs from protesters storming town halls and offices in opposition to repealing Obamacare, sources in the room told Politico.

House GOP Conference Chairwoman Cathy McMorris Rodgers invited Rep. David Reichert, a former county sheriff, to present lawmakers with protective measures they should have in place. Among the suggestions: having a physical exit strategy at town halls, or a backdoor in congressional offices to slip out of, in case demonstrations turn violent; having local police monitor town halls; replacing any glass office-door entrances with heavy doors and deadbolts; and setting up intercoms to ensure those entering congressional offices are there for appointments, not to cause chaos.

“The message was: One, be careful for security purposes. Watch your back. And two, be receptive. Honor the First Amendment, engage, be friendly, be nice,” said Republican Study Committee Chairman Mark Walker (R-N.C.). “Because it is toxic out there right now. Even some of the guys who have been around here a lot longer than I have, have never seen it to this level.”

He later added: “For those of us who have children in grade school and that kind of thing, there’s a factor in all of this, saying: How far will the progressive movement go to try to intimidate us?”

The conference discussion comes as Democratic activists around the nation ramp up protests against Republican efforts to repeal Obamacare. Protesters have disrupted town halls and other public events, jeering and yelling at Republican [representatives]…

Last weekend, conservative Rep. Tom McClintock (R-Calif.) similarly had to be escorted out of a town hall meeting by a half-dozen police officers after the crowd turned angry. And just as Republicans were leaving their conference meeting Tuesday, more than 100 protesters showed up at one of Rep. Martha McSally’s Arizona congressional offices, according to the Arizona Daily Star. Congressman Tom McClintock, R-Calif., fields questions from an audience in Roseville, Calif., Saturday, Feb. 4, 2017. McClintock faced the rowdy crowd at the packed town hall meeting, and had to be escorted out by police as protesters followed him, shouting.

Also discussed at the closed-door conference meeting was how to engage Democratic constituents to ensure they feel they’re being heard. After Reichert (R-Wash.) spoke about the security side, Speaker Paul Ryan (R-Wis.) stood up to talk about how to engage constituents in a “congenial” manner. …

Democrats, meanwhile, dismissed Republicans’ security ramp-up as an attempt to shield themselves from criticism.

“I think what you’re seeing is Republicans trying to use security to try to hide themselves from their constituents because they have no plan for a replacement and very little support from Donald Trump,” said Rep. Ruben Gallego (D-Ariz.). “They’re going to use so-called security to keep people away.”

But the potential for violence is serious enough that the House sergeant-at-arms has asked congressional offices to notify the office of any potential threat, sources told Politico. The office will also be passing out manuals of best practices to keep staffers safe.

McMorris Rodgers last week pulled together a group of lawmakers, including Reichert, to strategize on how to best manage and respond to the spreading protests. The Washington Republican — who during an early January speech was drowned out by protesters shouting “Save our care!” — asked Reichert to present some pointers to the full conference.

Reichert, in a brief interview after the conference meeting, said lawmakers are dealing with more than just unruly town hall meetings. He said organizers [protesters] are coming into their offices unannounced, showing up with signs and flooding offices with phone calls. Reichert said he told lawmakers they should “make sure you have a back door in your office if there is some sort of danger.”

“It’s not that you run from protesters, but if someone presents some sort of physical threat or are espousing a verbal threat that could lead to a physical threat, if you feel that you’re in danger and your staff is in danger, call 911 and leave and go out the back door,” he said.

Reichert also encouraged them to “make sure you have a hard door, not a glass door” that can shatter, and install an “intercom system with a camera at the front so you can see who is there.”

“The world is sometimes not a friendly place,” he said… “There is a mission out there right now amongst some people to disrupt the offices of certain members … to make us look inaccessible, unresponsive and like we’re not doing anything. … There is a list of things you can do to make sure your people are safe.”

Reichert also recounted how several angry constituents “bum-rushed” into his office several years ago, blowing past a staffer. Afterward, his office reached out to the organizers of the local group and asked them to come back in groups of eight to 10 to hear their concerns. He suggested lawmakers take a similar diplomatic tack in their own districts.

“The biggest thing we can do is reach out to these people,” Reichert said. “When you have 40 to 50 people show[ing] up with protest signs, there is no way we’re going to have an opportunity to exchange ideas and thoughts. So you’ve got to build a relationship so you don’t get to the level where they feel they need to threaten or antagonize you or try to get you upset and get a YouTube moment.”

At one point, GOP leaders showed a video of what happened to McClintock (R-Calif.) this weekend during his town hall meeting. … But then the conversation turned back to safety precautions.

One member who asked not to be named said the meeting also touched on threats against lawmakers.

The presentation was particularly important, those in attendance said, because it’s not just the most politically vulnerable, moderate members being targeted by protesters. Conservatives have also seen Democratic activists show up at events, including one recently hosted by Rep. Dave Brat (R-Va.), who ousted former Majority Leader Eric Cantor. Many of these lawmakers in safe districts have never dealt with [orchestrated progressive protests].

Rep. Bill Flores (R-Texas) said it was important to address the matter.

“If you look at what the left is doing,” he said, “they can endanger your constituents or your staff” who are just trying to do their jobs.

Reprinted here for educational purposes only. May not be reproduced on other websites without permission from Politico.

2. List the measures Congressman David Reichert (who is a former county sheriff) recommended fellow representatives put in place to protect themselves and staffers.

3. What did Congressman Mark Walker say about the safety issue?

4. a) How have Democratic lawmakers responded to Republicans’ concerns for their safety?
b) Do you agree with this assertion? Explain your answer.

5. During a brief interview after the meeting, what further recommendations did Rep. Reichert say he made to fellow lawmakers?

6. How did Reichert recommend lawmakers respond to groups who show up at a Congress member’s office to protest an issue?

The purpose of a town hall meeting is an informal public meeting…derived from the traditional town meetings of Colonial America. Typically open to everybody in a town community and held at the local municipal building, attendees generally present ideas, voice their opinions, ask questions of the public figures, elected officials, or political candidates at the town hall. (from wikipedia)

Rep. McClintock believes that many of the protesters who shut down his town hall did not live in his district. He said, “We were advised by both the Capitol Police and the Roseville Police Department that the event was targeted by outside agitators and to be aware.”

How do you think lawmakers should respond to critics (angry constituents or agitators from outside the district) who attend a meeting to shout them down or shut it down?

CHALLENGE: Read this week’s editorial “A Thought Experiment About Republicans” by Scott Adams, the creator of the Dilbert comic strip.
a) What assertions does he make?
b) Do you agree or disagree with the premise of Adams’ commentary? Explain your answer.

California Congressman Tom McClintock was evacuated by police, after hundreds flocked to his Town Hall meeting in Roseville on Saturday. The meeting was one of many Congressman McClintock does every year, but this time, things became unruly inside the event as well as outside. McClintock  (R-CA 4th District), told FOX40, “We were told the situation was deteriorating and becoming dangerous and they wanted me out.”

McClintock said he wanted to stay and talk to a second group who could not get into the packed theater, but police advised against it. He also believes many in the crowd did not live in his district. “We were advised several days ago by both the Capitol Police and the Roseville Police Department that the event was targeted by outside agitators and to be aware,” McClintock told FOX40.

Watch as Rep. Tom McClintock is escorted by police from his Townhall. One viewer commented: “I think it’s obvious why they were not let in.”