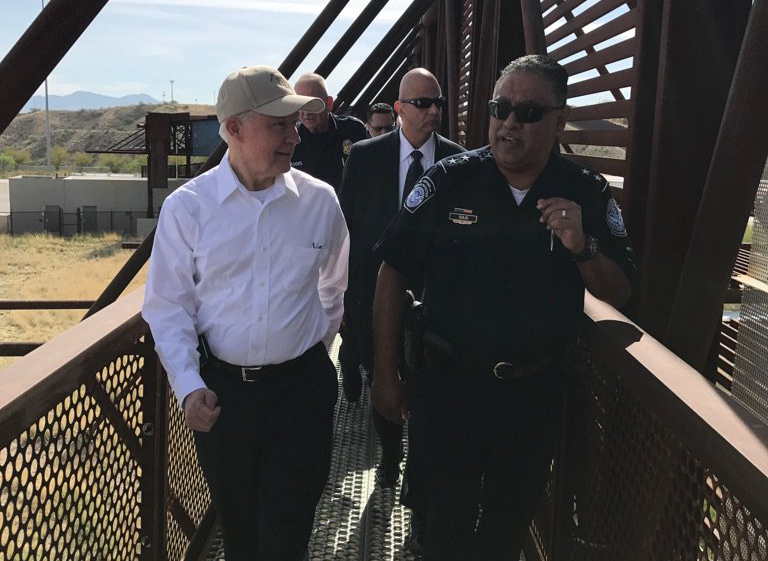 (Compiled from reports at NY Post and LA Times) – U.S. Attorney General Jeff Sessions has directed federal prosecutors in the states bordering Mexico to crack down on immigrants who repeatedly enter the country illegally.

A memorandum made public Tuesday morning orders each of the five federal Southwest border districts — spanning California, Arizona, New Mexico and Texas — to appoint a “border security coordinator” to oversee “the investigation and prosecution” of migrants under the new policy.

The crime of improper entry by a migrant is currently a misdemeanor. Under the new policy, it will be prosecuted as a felony for migrants who already have two such misdemeanor convictions or for those with one conviction if there are aggravating circumstances, such as gang affiliation.

In his directive to federal prosecutors, Sessions said felony prosecutions would be recommended for repeat illegal immigrants, “especially where indicators of gang affiliation, a risk to public safety or criminal history are present.”

Speaking to a group of Customs and Border Protection agents in his first trip to the border as the nation’s top prosecutor, Sessions said the new policy is aimed at preventing drug cartel workers from entering the country.

“For those that continue to seek improper and illegal entry into this country, be forewarned: This is a new era. This is the Trump era,” Sessions said Tuesday in a speech at the Nogales port of entry in Arizona. “The lawlessness, the abdication of duty to​ enforce​​ our laws, and the catch-and-release policies of the past are over​.”

Cartels are “criminal organizations that turn cities and suburbs into war zones, that rape and kill innocent citizens, and who profit by smuggling poison and other human beings across our borders,” he said.

Putting into action many of President Trump’s campaign promises on illegal immigration, Sessions ordered federal prosecutors to pursue charges against illegal immigrants who commit crimes, who illegally and repeatedly cross the border and those with drug cartel and gang affiliations or who have criminal histories.

He also said all adult illegal immigrants caught at the border will be detained and ordered a “surge” of 25 immigration judges to detention centers along the border to support the effort.

Sessions also said he will add 125 immigration judges over the next two years to “reduce​ ​the significant​ ​backlog in our immigration​ courts​  — backlogs and​ ​catch-and-release policies​ ​have​ ​undermined the effectiveness of our law officers’ work.”

“The battle is far from over. We must follow up on the successes we [are having] so far, and here on the border, we will do so,” ​Sessions said.

From January to February, crossings fell by 40 percent and in March showed a 72 percent drop from the month before, the lowest figure in 17 years, Sessions said.

​”This is no accident, this is what happens when you have a ​president ​who understands the threat, who is not afraid to ​publicly identify the threat and stand up to it and who makes c​lear​ to law ​enforcement ​that the leadersh​i​p of th​ei​r country finally has their back​ -​ and tells the whole world the illegality is over​,” he said.​

The policy is part of a broader plan to toughen immigration laws and speed deportations, said David Lapan, a spokesman for the Department of Homeland Security.

Compiled from news reports published on April 11 by Mark Moore at the New York Post and Nigel Duara at the Los Angeles Times.  Reprinted here for educational purposes only. May not be reproduced on other websites without permission.

2. What is the difference between a felony and a misdemeanor?

3. The crime of improper entry by a migrant is currently a misdemeanor. For what reasons will some now be charged with a felony? Be specific.

5. a) What do you think of the Trump administration’s crackdown on those who repeatedly enter the U.S. illegally?
b) If you waited on line and obtained the paperwork necessary to emigrate to the U.S. legally, do you think you would have a different answer to a)? Explain your answer.

6. Watch the Attorney General’s news conference under “Resources” below. Consider the role of the U.S. Attorney General. What is your reaction to the new directives from the AG? (optimistic, pessimistic? heartened? dismayed?) Explain your answer.

Read the transcript of remarks made by Attorney General Sessions to Customs and Border Protection personnel.