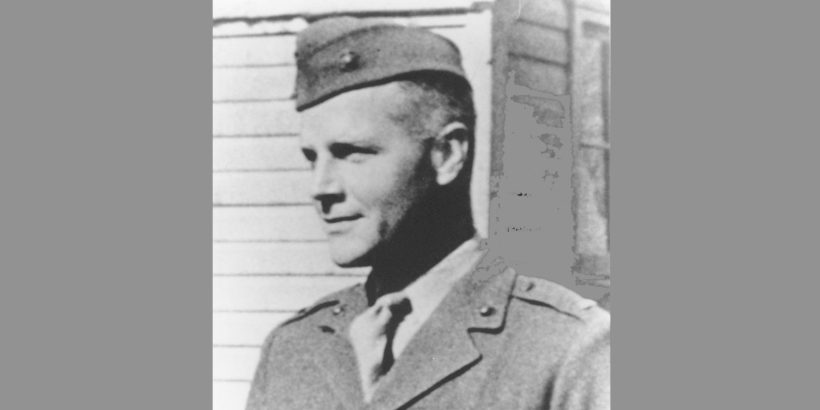 (by John Shearer, KnoxNews.com) — The recently identified remains of a Marine hailed for his bravery in battle were returned home 72 years after he was killed on a remote Pacific atoll during World War II.

First Lt. Alexander “Sandy” Bonnyman died at age 33 while leading Marines against entrenched Japanese forces during a three-day fight for the strategically important island of Tarawa in 1943. He was posthumously awarded the Medal of Honor in 1947, but his remains weren’t found until earlier this year by a nonprofit organization called History Flight that has been searching for missing servicemen.

Bonnyman was among 36 unidentified servicemen the group History Flight exhumed in Tarawa in the Republic of Kiribati earlier this year. The remains were brought to Hawaii for identification in July.  The Department of Defense POW/MIA Accounting Agency then announced it had identified Bonnyman using dental records and other evidence. Knoxville native Marine 1st Lt. Alexander “Sandy” Bonnyman, Jr., stands atop the bunker where he was killed during the battle of Tarawa on Nov. 22, 1943. Bonnyman, center at the top of the makeshift ladder, was awarded a Congressional Medal of Honor for his bravery.

On Sept. 27, Bonnyman’s remains were laid to rest in a family plot in West Knoxville.

Some 200-300 people plus a Marine honor unit and band were on hand for the unique burial service, which was nearly 72 years after the first lieutenant died leading an assault on a Japanese bomb shelter on the Pacific atoll of Tarawa.

Marines and civilians, the young and old, and family members and strangers gathered to pay respects during the brief ceremony.

“It doesn’t matter what generation they serve, they are a brother and you’ve got to come out and support them,” said Josh Burnett, who served in the Marines from 2000-04. “They are family.”

Donna Buswell said after the service that she also felt a pull to come and salute him. “This is a once-in-a-lifetime event, so I had to see it,” she said. “It was beautiful.”

The formal service included a procession led by a Civil War-style caisson wagon operated by Burroughs Battery of Blaine in Grainger County, a missing man formation flyover, a 21-gun salute, the playing of “Taps” and a Marine band musical salute.

Bonnyman’s grandson, Clay Bonnyman Evans, who has researched his grandfather’s life and was at Tarawa when his remains were found, said the Marine’s parents, Alexander and Frances Bonnyman, would have felt peace Sunday.

“It broke their hearts when he died, and as a small measure, they wanted to get him back to Knoxville,” he said during a reception for family and friends at Berry Highland Memorial Funeral Home off Kingston Pike after the burial.

Also on hand were two of Bonnyman’s daughters, Fran Evans and Alexandra Prejean.

Prejean, now living in Hawaii and only 2 when her father died, said she had been to Tarawa and called it a beautiful place. But she felt Knoxville is where he should be buried. “He’s home in Knoxville,” she said at the reception.

Her older sister was 9 years old when her father died and remembers the family living in Santa Fe, N.M., while he operated a copper mine after leaving Knoxville. She recalled that they would go to church in Santa Fe and go to a local pharmacy afterward for lunch, and it was there that he heard the news about the attack on Pearl Harbor.

“He was very distressed and agitated,” she said. “It was very, very memorable.”

Although he did not have to serve due to his work with the copper mine, Bonnyman soon enlisted and eventually met his unfortunate death in the Pacific. Fran Evans accepted her father’s Medal of Honor in 1947 from Secretary of Navy/Defense James Forrestal and said Sunday that she still has vivid memories of the long train ride from New Mexico to Washington, D.C., and the ceremony.

Bonnyman’s nephew, Robert McKeon, who led the liturgies along with Anne Bonnyman, a niece, recalled after the service that the noted Marine had a very likable manner.

“He was a very pleasant guy,” he said. “He was so good he could sell coal to a coal mine. He had a great personality and a leadership quality that all of us looked up to.”

Reprinted here for educational purposes only. May not be reproduced on other websites without permission from KnoxNews .co.. For the original article, visit the KnoxNews website.

2. Why was Lt. Bonnyman awarded the Medal of Honor in 1947? What did the citation say?

3. What type of ceremony was held for Lt. Bonnyman when his remains were buried in Knoxville, TN last week? — Who attended the service?

4. What did Bonnyman’s daughter Fran remember about her father’s reaction to the Japanese attack on Pearl Harbor?

5. Read the “Background” below and watch the video under “Resources.” What surprises you most about Lt. Bonnyman’s story and/or the Battle of Tawara?

ABOUT THE BATTLE OF TARAWA:

Read more about the Battle of Tarawa at Wikipedia.