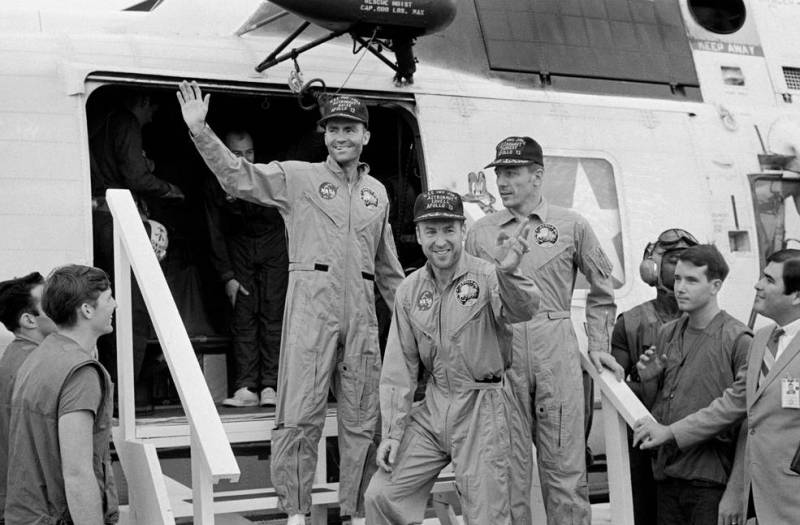 (Left to Right) Fred Haise, Jim Lovell and Jack Swigert, the crew of Apollo 13, step aboard the USS Iwo Jima, prime recovery ship for the mission, following splashdown and recovery operations in the South Pacific Ocean on April 17, 1970. NASA

(Compiled from articles by Stephen Shankland, CNET and Ashley Strickland, CNN) — Apollo 13, the NASA mission that failed spectacularly to reach the moon but succeeded in saving the lives of three astronauts, launched 50 years ago on April 11.

And now NASA’s Apollo 13 in Real Time website lets you relieve the harrowing events at the same pace they occurred then.

The replay of the launch began on April 11 at 12:13 p.m. PT, synchronized with the original event on April 11, 1970. You can also easily start the event anytime, selecting a specific moment in the mission or having the re-creation begin at what was then 1 minute before the actual launch.

The specific-moment option lets you skip to the famous drama, too — the real version, not the Hollywood take in the 1995 movie Apollo 13 starring Tom Hanks as Jim Lovell, the mission’s commander.

If you’re watching in real time, the way people did in 1970, you’ll have to wait 56 hours after launch for the disaster, an oxygen tank explosion that ended the mission’s plan to reach the moon and threatened the lives of the astronauts. If you’re less patient, you can find it easily by checking the “mission milestones” list of events.

Apollo 13 took place less than a year after the Apollo 11 mission succeeded in landing humans on the moon for the first time. 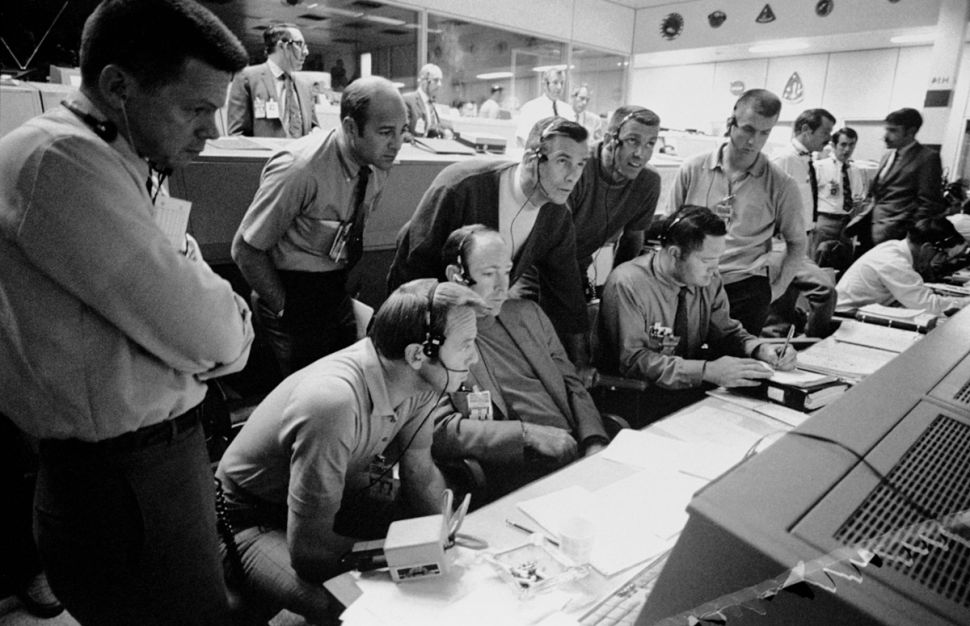 The Apollo 13 in Real Time site offers a video stream of the mission accompanied by live audio chatter from Mission Control, astronauts Lovell, Jack Swigert and Fred Haise, and others involved in NASA’s third attempt to send men to the moon. Along with the video and audio from the launch site, spacecraft, mission control and press conferences, the site also includes transcripts and photos.

NASA software engineer and historian Ben Feist, along with a dedicated team of historians, researchers and audio, film and visual experts, have digitized and restored footage and audio from the mission.

Everything is organized in the order it happened during the mission, from launch to the celebrated return of the astronauts to Earth.

Mission Control footage is [combined] with film taken by the astronauts during their flight, as well as broadcasts about the mission. Every photo has been inserted when it was taken.

More than 7,200 hours from 50 different channels of Mission Control audio are synchronized to play out as they were spoken.

Included is newly digitized and restored audio, according to the apolloinrealtime.org site.

The intriguing audio captures the range of emotions and magnitude of stress experienced by the astronauts and ground teams as they worked together to safely return the three men. It’s a race against time over five days, 22 hours and 54 minutes.

At the beginning of the mission, there are jokes and fun, humanizing exchanges. After the success of the Apollo 11 mission in 1969, certain aspects of spaceflight had started to feel routine and it’s palpable in the crew.

Everything takes a drastic shift when the explosion occurs on April 13, 1970. Tension, strain and long pauses as they search for words mark the exchanges between the astronauts and Mission Control.

Historic moments stand out, such as the infamous words spoken by Lovell of “Houston, we’ve had a problem,” or Haise saying, “I didn’t think I’d be back here this soon” as he and Lovell entered the lunar module after the explosion, preparing to use it as a “lifeboat.”

The Apollo 13 project joins two others on Feist’s site, a NASA-funded project including real-time explorations of the Apollo 11 and Apollo 17 missions.

Feist also performed audio restoration for the “Apollo 11” documentary, directed by Todd Douglas Miller, that aired on CNN in 2019 for the 50th anniversary of the mission.

Compiled from articles on April 11 by Stephen Shankland, CNET and Ashley Strickland, CNN. Posted here for educational purposes only.

1. Apollo 13 would have been the 3rd successful moon landing following Apollo 11 (Neil Armstrong-Buzz Aldrin) and Apollo 12. Why did it fail to accomplish its mission?

3. How long after the launch of Apollo 13 did the explosion occur?

4. How long did it take after the explosion for the astronauts to land safely on earth?

5. Watch the videos under “Resources.” The ability of Mission Control and the astronauts to figure out a way to get them home – and successfully carry it out – has been called a testament to “American ingenuity.”
Ingenuity is defined as: the ability to solve problems in new and clever ways. What is “American ingenuity?”

6. Some people would say the astronauts were lucky or fortunate. Others would acknowledge it was American ingenuity and God’s providence at work. What do you think?

OPTIONAL: The events of Apollo 13 in 1970 were made into the movie Apollo 13 with Tom Hanks. How does the movie compare to the actual events?

As the astronauts set to be the fifth and sixth people to walk on the moon, Jim Lovell and Fred Haise had undergone months of extensive preparation to carry out every aspect of NASA’s Apollo 13 mission — including what to do if something went wrong.

But two days after their successful launch on April 11, 1970, mission commander Lovell, lunar module pilot Haise and command module pilot Jack Swigert were thrown into an emergency for which there was no plan. Fifty years ago today (April 13), the Apollo 13 crew “had a problem.”

“Problem solving with the system we had was suited to what we had to get done, as every mission had problems to deal with,” Haise said in an interview. “But we never considered an explosion, in the sense of being able to work around that.”

“Normally, that would manifest in a loss of the vehicle and crew,” he said.

And yet, that was exactly what Haise, Lovell and Swigert, as well as the teams of engineers in Mission Control, had to deal with.

An oxygen tank, which had been unknowingly damaged during a pre-flight test, exploded, tearing apart the service module that provided the critical power and life support systems for the Apollo 13 command module.

Not only did the explosion rule out any chance of achieving a moon landing, it threatened to strand the astronauts in deep space. That they made it home safely due to the ingenuity [of the astronauts] and the teams that worked the problem on the ground [as well as good timing].

(from an April 13 space .com article by Robert Z. Pearlman)

Read the full account of what occurred 50 Years Ago: “Houston, We’ve Had a Problem” at nasa.gov.

The LiOH canisters scrubbed carbon dioxide from the cabin air. The solution, which called for using the command module’s incompatible canisters in the lunar module, famously involved jerry-rigging a way to fit a literal square peg in a round hole using nothing but the spare parts they had aboard the spacecraft. Watch as space.com explains:

Watch “Houston, We’ve Had a Problem” parts 1 and 2 below: