NOTE: This article was published at NYPost.com on September 16th. 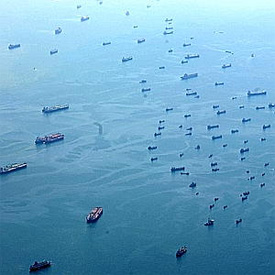 (by Paul Tharp, NYPost.com) – In a faraway corner of the Pacific is anchored the world’s ghost fleet of cargo ships as far as the eye can see, with no cargo, no crews — and no place to go.

The out-of-work fleet — larger than the combined navies of the US and Britain — stretches for 20 miles off the coast of Malaysia as an eerie symbol of the recession’s wipeout of world commerce.

Economists say that normally these 500-plus container vessels, oil tankers and merchant ships would be steaming between the ports of Asia and the US laden with cameras, jeans and all sorts of goods for retail shelves this Christmas. Instead, the mammoth ships have been moored for months, with only a guard or two on decks to watch for marauding pirates.

Owners from all over the industrialized world tie up their empty vessels along the stretch of international waters 50 miles from Singapore’s harbor because it’s cheap and is off the beaten path for pirates, at least for now. Local fisherman say they’re afraid to venture toward the lifeless armada because they see no movement aboard and believe evil spirits have turned the vessels into ghost ships.

Maritime brokers say the world’s top shipping companies are struggling to stay afloat, with cargo loads down by half this year, according to the Baltic Dry Index, which tracks most maritime tonnage. By 2012, one in four commercial ships will be idle, analysts predict.

2. How has the recession affected cargo ship companies worldwide?

3. Where have owners of 500 unused cargo ships tied up their empty vessels?

4. Why have the owners chosen this location?

5. How many commercial ships will be idle by 2012, according to some analysts?

Maersk is the largest container ship operator and supply vessel operator in the world. (It has activities in a variety of business sectors, primarily within the transportation and energy sectors). A.P. Moller-Maersk is based in Copenhagen, Denmark, with subsidiaries and offices in more than 135 countries worldwide and around 120,000 employees.

Estelle Maersk is a container ship owned and run by the Maersk Line. She was, and still is, as of 2009, one of the eight largest container ships ever built by terms of gross tonnage. Watch excerpts from a Discovery Channel show (featuring the Estelle Maersk) on Mega Cargo Ships below: