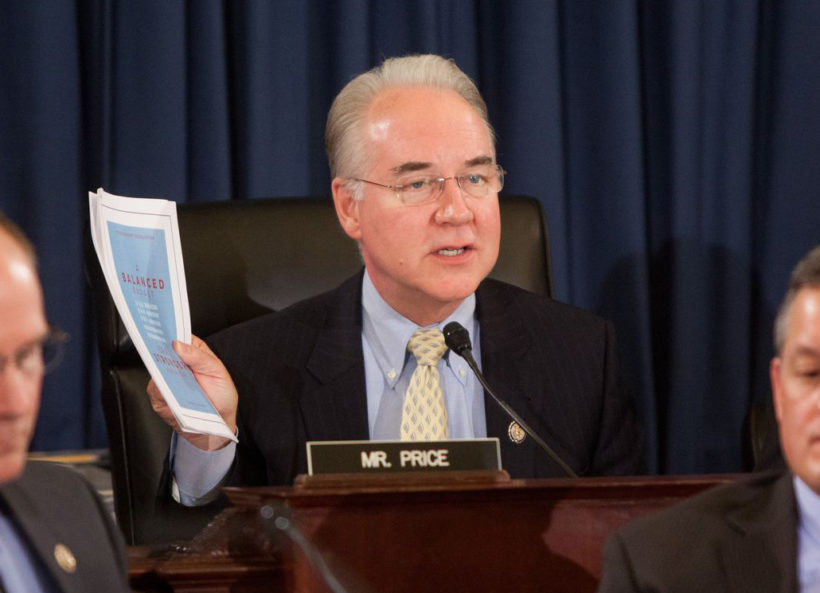 (by Jennifer Haberkorn, Politico.com) – President-elect Donald Trump has chosen Rep. Tom Price, a leading GOP voice against Obamacare, to run the Department of Health and Human Services, a job that will put him in charge of dismantling the [controversial] law, according to several Republican sources.

Price, 62, an orthopedic surgeon, [was named by Trump] on Tuesday. The selection of the six-term Georgia representative is viewed as a strong embrace of the House’s effort to repeal and replace Obamacare.

Price, who [is the Chairman of] the House Budget Committee, was one of the first Republicans to introduce an alternative to Obamacare when Democrats were debating health care reform in 2009 and 2010. [His proposed legislation, named the Empowering Patients First Act, was introduced in 2009].

That plan has similarities to both the “Better Way” plan put forward this year by House Speaker Paul Ryan and the plan Trump outlined during his campaign. But Price’s bill, which also includes traditional GOP ideas such as health savings accounts, high-risk insurance pools, and allowing interstate insurance sales, is the most detailed and the only one that has been put into legislative language.

Given Price’s connections to the House and his friendship with Ryan, he could be a key player in helping the House pass an Obamacare replacement plan. He is also close with Vice President-elect Mike Pence; both are former chairs of the conservative House Republican Study Committee.

An early Trump supporter, Price endorsed the president-elect in May. Price also campaigned with Trump at an Obamacare repeal rally a week before the election.

“The things that we all believe about health care — we want a system that is affordable for everybody, that is accessible for everybody, that is of the highest quality and provides choices for patients — all of those things have been destroyed by Obamacare,” Price said at the rally. That is “why we need Donald Trump and Mike Pence to work with us and make sure we put in place a real health solution.”

Several House Republicans were eager to see a colleague elevated to the president’s Cabinet. House Energy and Commerce Chairman Fred Upton, said Price would be a “great choice” for HHS secretary.

“He knows the programs in and out,” Upton said. “He has wonderful respect here and that’s what you need. Particularly for someone who’s going to be president who has never been a legislator.”

Conservative health care experts also said Price’s experiences as a physician and a lawmaker prepare him for the job.

“Not only is he a physician … he has a lot of experience in how to get legislation accomplished,” said Grace-Marie Turner, president of the Galen Institute, which strongly opposes Obamacare. “But he’s also incredibly articulate and passionate about patient-centered health reform from his own personal experience.”

Price has been a leading voice on health IT issues in Congress, fighting for a more doctor-friendly version of the law that regulates use of electronic health records. Last year, he helped collect 116 House signatures supporting a slowdown in the process.

[In a statement made today, President-elect Trump said Price “has earned a reputation for being a tireless problem solver and the go-to expert on healthcare policy, making him the ideal choice to serve in this capacity. He is exceptionally qualified to shepherd our commitment to repeal and replace Obamacare and bring affordable and accessible healthcare to every American.”

“There is much work to be done to ensure we have a healthcare system that works for patients, families, and doctors; that leads the world in the cure and prevention of illness; and that is based on sensible rules to protect the well-being of the country while embracing its innovative spirit,” Price said in a statement announcing his selection for the Cabinet post.

Price has served six terms in the House of Representatives and formerly was a member of the Georgia state Senate. He was opposed to the Affordable Care Act even before it became law.

“Premiums have gone up, not down,” said Price in a statement last month. “Many Americans lost the health coverage they were told time and time again by the president that they could keep. Choices are fewer.”

If he is confirmed by the Senate, Mr. Price’s duties will include overseeing a 78,000-employee department whose responsibilities go far beyond the Affordable Care Act. They include running the Medicare insurance program for the elderly, overseeing the Medicaid insurance program for low-income Americans, funding medical research at the National Institutes of Health (NIH), operating the Food and Drug Administration (FDA), and advocating for public health with the Centers for Disease Control and Prevention (CDC).]

Reprinted here for educational purposes only. May not be reproduced on other websites without permission from Politico. For the original article, visit Politico .com. (The last five bracketed paragraphs are from the Boston Globe and WSJ.)

1. List at least 5 facts you learn from this article about Tom Price, Donald Trump’s pick for Secretary of Health and Human Services (HHS).

2. What was Rep. Price the first to do when Obamacare was being debated before becoming law?

4. a) What type of health insurance system does Price say everyone wants and Obamacare has destroyed? (List 4 factors)
b) Ask a parent: do you agree with Rep. Price’s assertion about Obamacare? Please explain your answer.

5. What experience does Tom Price have that has prepared him for the job of HHS Secretary, according to supporters?

6. Tom Price Wants a ‘patient-centered’ health-insurance system. Read the info on the HHS under “Background” and watch the video under “Resources.” Do you think Rep. Price is a good choice for HHS Secretary? (Do you think the Secretary of HHS should be a doctor? Explain your answers.

Mr. Price spent a 20-year medical career in Atlanta, where he also undertook his residency. He went into state politics when Republicans were still a minority in Georgia. After they took control, he became the first Republican Senate Majority Leader in the history of the state, he says in his official biography.

In the U.S. House, where he has served since 2005, Mr. Price has voted consistently against federal funding of abortion, and in opposition to federal requirements that insurance plans cover contraception without out-of-pocket costs as part of the Affordable Care Act.

As a Georgia state senator, Mr. Price had voted for a state requirement that insurance companies cover contraception in their prescription-drug plans. The difference, he said when asked about it in 2012, was Washington. “The issue here…is whether or not the federal government ought to be deciding what health coverage is,” Mr. Price said.