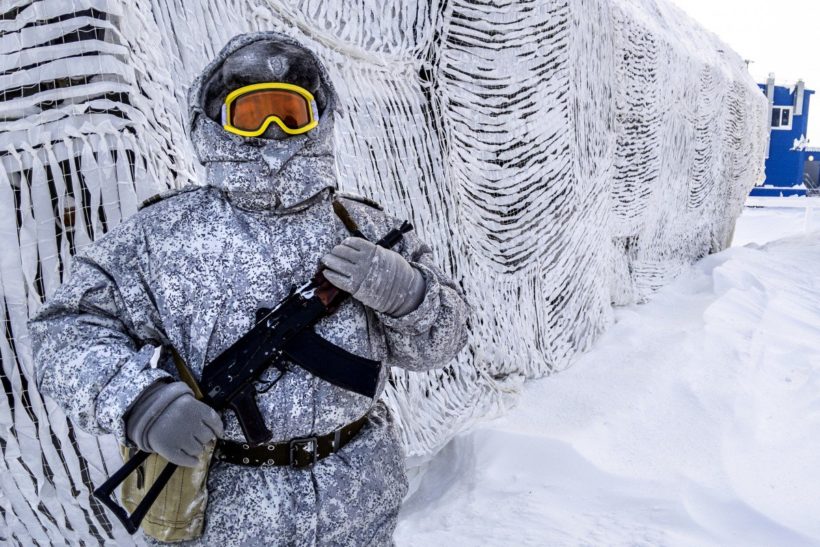 A Russian soldier holds a machine gun as he patrols the Russian northern military base on Kotelny Island, beyond the Arctic Circle on April 3. Photo: AFP

(UK Guardian, from an AFP report in Rovaniemi, Finland) – The US plans to beef up its Arctic presence to keep Russia’s and China’s “aggressive behavior” in check in the resource-rich region, Secretary of State Mike Pompeo said this week.

“The region has become an arena of global power and competition” owing to vast reserves of oil, gas, minerals and fish stocks, Pompeo said in a speech in northern Finland. “Just because the Arctic is a place of wilderness does not mean it should become a place of lawlessness,” he said.

Speaking on the eve of a meeting of the eight members of the Arctic Council, Pompeo took on Beijing and Moscow.

“China’s pattern of aggressive behavior elsewhere will inform how it treats the Arctic,” he said.

“Do we want the Arctic Ocean to transform into a new South China Sea, fraught with militarization and competing territorial claims?” he said.

“Do we want crucial Arctic infrastructure to end up like Chinese-constructed roads in Ethiopia, crumbling and dangerous after only a few years?

Do we want the fragile Arctic environment exposed to the same ecological devastation caused by China’s fishing fleet in the seas off its coast, or unregulated industrial activity in its own country? The answers should be clear.”

Noting that China’s most northern tip was 900 miles from the Arctic, Pompeo [refuted] Beijing’s [claim to be] a “near Arctic state.”

“There are only Arctic states and non-Arctic states. No third category exists, and claiming otherwise entitles China to exactly nothing,” he said.

The Council’s eight members include the Canada, Denmark, Finland, Iceland, Norway, Russia, Sweden, and the United States. While China is not a member state of the Arctic Council, it gained observer status in 2013. Beijing has invested massively in the region – almost $90 billion between 2012 and 2017, according to Pompeo – and intends to fully benefit from the advantages of the Northern Sea Route.

The shipping channel, which drastically cuts sailing times between the Pacific and Atlantic by passing north of Russia, is increasingly usable as the ice melts.

China and Russia would like to make the Northern Sea Route a part of the New Silk Road project, a vast Chinese investment program which several countries, especially the US, see as an attempt to gain control.

Secretary Pompeo also noted a Pentagon report released last week that said China could use its growing civilian research presence in the Arctic to strengthen its military presence, and possibly deploy submarines to the region as a deterrent against nuclear attacks.

“These provocative actions are part of a pattern of aggressive Russian behavior in the Arctic. Russia is already leaving snow prints in the form of army boots,” he said.

He noted that Russia announced its intent to increase its military presence in the Arctic in 2014, and has re-opened a Cold War-era Arctic military base there and several bases that were abandoned after the fall of the Soviet Union.

“Since then, thanks in part to its large icebreaker fleet, Russia has been able to renovate old bases and infrastructure. It claims to have built 475 new military sites, including bases north of the Arctic Circle, as well 16 new deep-water ports. It secures this presence through sophisticated new air defense systems and anti-ship missiles,” he said.

…Pompeo made the remarks…just minutes before a bilateral meeting with his Russian counterpart, Sergei Lavrov, amid rising US-Russian tensions over Venezuela, among other things. The two smiled and shook hands in front of the assembled media, but refused to answer questions on the nature of their talks.

To stifle rival ambitions in the Arctic, the US is “hosting military exercises, strengthening our force presence, rebuilding our icebreaker fleet, [and] expanding Coast Guard funding,” Pompeo said.

At Congress’s request, the Pentagon is to present a new defence strategy for the Arctic by June 1.

Compiled from an articles published at theguardian .com on May 6 and with several excerpts from Breitbart News. Reprinted here for educational purposes only. May not be reproduced on other websites without permission.

2. a) List the members of the Arctic Council.
b) China has observer status, but says it is a “near Arctic state.” How does Secretary Pompeo refute China’s claim?

3. For what reasons does the U.S. oppose China’s attempts to establish a presence in the Arctic? Be specific.

4. What did Secretary Pompeo accuse Russia of doing in the Arctic region?

5. What is the U.S. doing to counter Chinese and Russian aggression in the Arctic?

6. How do you think the Arctic Council’s Scandinavian countries and Canada view the U.S.’s tough stand against Russian and Chinese control in the Arctic? (positive, negative, neutral?) Explain your answer.

Speaking in Finland, US secretary of state warned that Russia is engaging in provocative behaviour in the Arctic: